Is Nerve Damage Affecting the Lungs in Fibromyalgia? 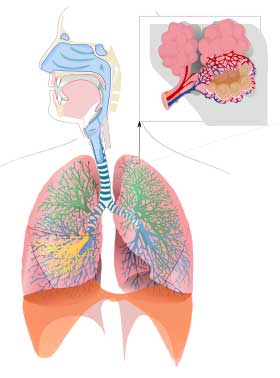 People don’t typically tie fibromyalgia or chronic fatigue syndrome in with lung issues but they do crop up – particularly in ME/CFS – at times. Some people experience “air hunger” or difficulty breathing or difficulty taking deep breaths.

Some studies suggest that ventilation – the movement of air in and out of the lung – may be reduced during exercise in some people with ME/CFS. Staci Stevens, an exercise physiologist, has speculated that the small and highly active muscles involved in breathing could be impacted in this disease.

The authors got to the heart of matter in this paper quickly. They reported that the sympathetic nervous system (SNS) in fibromyalgia ) is hyperactive at rest but then folds or crashes when put under stress; i.e. you’re wired and tired at “rest” (some rest!) and then things tend to go haywire when you system is put under stress. (The same pattern is present in chronic fatigue syndrome (ME/CFS))

How did they connect the lungs to fibromyalgia? They used diabetes. Diabetes is also not mentioned much in connection with fibromyalgia (although check out an FM metformin study), but the authors pointed to a similar ANS problem in diabetes which leads to problems with blood vessel filling in the very small (microvascular) blood vessels in the lungs. In diabetes results in problems with carbon monoxide diffusion from the lungs.

Oddly enough, the same thing that appears to be happening in FM.

They took 45 FM patients and 45 controls and did a bunch of autonomic nervous system and lung volume and gas transfer tests including something called transfer factor which measures the capacity of the lung to diffuse carbon monoxide out of it. They also had them take a 31 question autonomic questionnaire called the Composite Autonomic Symptom Score or COMPASS.

FM patients have functional microcirculation and morphological abnormalities and the abnormal pattern of reactive hyperemia is due to greater sympathetic tone leading to increased vasoconstriction.

Further analyses found that the reduction in lung diffusing capacity was probably due to a significant reduction in lung capillary lung volume; i.e. the microvascular volume of the FM patients lungs had declined.

Both the smallest and most common blood vessels found, our capillaries are responsible for delivering blood to most of our tissues. They are so small that a red blood cell can just barely fit through them. As they are delivering red blood cells they are also allowing small molecules such as oxygen, CO2, sugars and amino acids to diffuse in and out of them. That diffusion part is apparently not working very well.

The authors suggested that damage to the cardiac autonomic nerves was causing problems with “the regulation of microvascular tone” and the distribution of pulmonary filling. They proposed that the receptors on our cells that cause FM patients blood vessels to dilate have been so overstimulated over time that they’re not responding to signals to dilate anymore. That leaves the blood vessels constricted, impairs blood flows and even (I believe) could reduce blood volume. 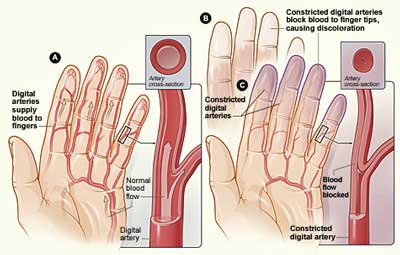 They also noted the high rates of Raynaud’s phenomena found in the FM participants in this study (1/3rd). Raynaud occurs when spasms in the arteries restrict blood flows usually to hands or feet causing the fingers or toes usually to turn white, then blue and then as the blood returns, causes them to tingle or burn. This is often caused by exposure to reduced temperatures. In some people being exposed to temperatures below 60 degrees can cause Reynaud’s.

The fact that the FM patients with Raynaud’s phenomena tended to have worse lung test results made sense given the similar sympathetic nervous system hyperactivity found in Raynaud’s. That, local hyperactivity, which affects the arteries not the smaller blood vessels found in the lungs, is so extreme that it causes the blood vessels become vasoconstricted or narrowed enough that the blood cannot get through.

Raynaud’s, then, appears to be another manifestation of a dysregulated autonomic nervous system in FM.

The authors didn’t spend any time on the clinical significance of their findings and it’s not clear from the paper what they are. Reduced carbon dioxide diffusion is found in many lung diseases (fibrosis, alveolitis, vasculitis, COPD, emphysema, pulmonary hypertension) as well as anemia (low blood volume). It’s not clear if they would contribute to shortness of breath or breathing problems sometimes found in ME/CFS or FM or if they reflect a problem which is present but which isn’t causing many symptoms.

This isn’t the first time that possible microcirculatory problems have popped up in FM, however. The authors of a 2014 exercise study proposed that microcirculatory problems could be contributing to the low VO2 max findings they found in FM patients. They argued that the next exercise study in FM should examine blood flows in the small blood vessels feeding the muscles.

These authors proposed that damage to the autonomic cardiac nerves was mostly likely to explain the blunted lung functioning. This, of course, is not the first time that damage to the autonomic nerves has been proposed or found in FM either.. Autonomic nerves are among the small nerve fibers that many studies have now found damaged in the skin of FM patients. 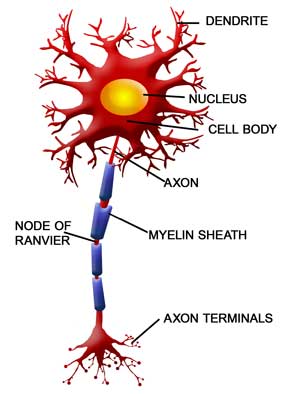 Last year that damage was extended to nerve fibers in the eye. Recently Sommers found such an unusual pattern of nerve damage in FM that she now calls it “small fiber pathology” to distinguish it from the more typical small fiber neuropathy found in other disorders. Caro and Winters have found damage to large nerve fibers in FM as well.

About a year ago a researcher suggested that the deep researchers look at nerves the more they are likely to find. Her prediction appears to be coming true. From the skin to the eyes to possibly the lungs nerve problems are cropping up in fibromyalgia.

What could be causing these nerve problems? If a Spanish group’s skin findings hold up then a brew of inflammation, mitochondrial problems and oxidative stress might fill the bill.

We don’t usually think of the lungs as being affected in FM but many people experience shortness of breath and other other lung issues. 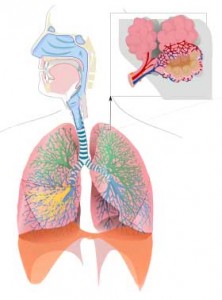 Is damage to the autonomic nervous system impacting the lungs in FM?

The exciting thing about this lung functioning study, however, may not be what it found but what it may portend. The microcirculation, autonomic nervous system and nerve fiber problems the study found suggest the lung issues are simply one example of a much larger problem. Find out more and take the poll in

If the autonomic nerves are affected then pyridostigmine bromide or Mestinon might be helpful. Mestinon allow one person with long term ME/CFS to exercise again and a Mestinon trial in ME/CFS is underway.