“The RNFL is an ideal structure (no other central nervous system tract has this unique arrangement) for visualizing the processes of neurodegeneration, neuroprotection and, potentially, even neuro-repair.  The authors

We know that fibromyalgia is a central nervous system disorder; the question is whether we can do away with the “central” part and call it simply a nervous system disorder. It’s clear that somewhere around 40% of people with FM also have small nerve fiber damage (SFN). That neuropathy describes not only the disappearance of some of the small nerves in the skin  and eyes but the thinning of the remaining ones in the skin. That last finding is so unusual that it’s been suggested that the small nerve fiber problems found in FM be called something else entirely ( small nerve pathology) 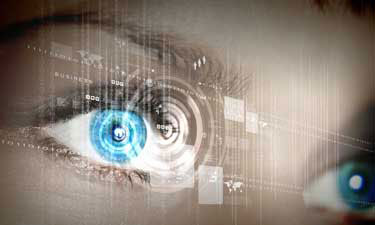 How important the small nerve fiber problems are to fibromyalgia, however, is unclear. Daniel Clauw, a prominent FM researcher, believes the SFN is probably incidental and has little to do with the core pathology of the disease.  Others believe that the process causing the loss and thinning of the unmyelinated fibers in FM probably plays a core role in the disease.

This Spanish study examined nerve thickness in a new part of the body – the retina of the eye. Until now nerve studies have focused on the peripheral nerves found in the body. Because this part of the eye is considered to be part of the central nervous system, this study was the first to examined potential small nerve problems in that area.

With 116 age and sex-matched patients and a 144 controls it was a nice-sized study. It aimed to determine if retinal nerve fiber thinning had occurred in three sections of the eye, and if it had, if disease duration, severity, etc. were associated with it. (They subdivided the FM participants into people with severe and “mild”  FM.) They used several different kinds of optical coherence tomography (OCT) in the study.

The study found that even patients with “mild” FM displayed “subclinical” thinning of the retinal nerves in the nasal and temporal sectors of the eye. The degree of thinning  was not significantly greater in people with longer duration or more severe FM, but was greater in the “biologic FM” subset; i.e., people with FM who did not display anxiety or mood disorders, than in FM patients with mood disorders.

A Biomarker of Neurodegeneration?

The unmyelinated nerves in the temporal quadrant of the eye – the most effected section of the eye in FM –  are amongst the first nerves to show damage in neurodegenerative diseases.  Axonal loss in the eyes is correlated with the extent of disability found in neurodegenerative diseases such as multiple sclerosis, and Parkinson’s and Alzheimer’s disease.  Because the nerve fiber thinning occurs early in Alzheimers and MS  progresses, retinal nerve fiber density tests have been suggested as early disease biomarkers.

The study findings buttressed the idea that FM is a neurodegenerative; i.e. a nerve damaging disease – placing it in the same general category as Alzheimer’s, Parkinson’s, multiple sclerosis and others.  The author asserted the findings indicate that FM is a neurological disease which produces “neuropsychological” symptoms.

The idea that FM is a neurodegenerative disease is not a new one. Something after all has to be causing the nerves in the pain inhibiting pathways of the central nervous system to more or less give up the ghost, and plenty of evidence suggests that nerve damage is present in the skin and corneas of significant numbers of people with FM. This may be the first study, though, to present physical evidence that FM is neurodegenerative in the same way that Alzheimer’s or Parkinson’s disease; i..e that central nervous system nerves are being directly compromised to some degree.

Reduced nerve fiber thickness in obstructive sleep apnea is believed due to reduced blood flows and the resulting low levels of oxygen in the fibers.  That’s an interesting finding given that this same group last year found reduced blood perfusion in the optic nerves of FM patients.

Dry eyes are more common in FM, and altered visual perception has been found in ME/CFS patients as well.

The amount of the fiber loss was subclinical; i.e., not enough to produce symptoms or loss of vision. 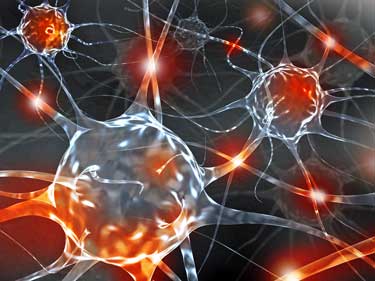 The authors suggested that because OCT scans are quick, cheap and non-invasive that they could easily become part of the diagnostic criteria for the disease. Given the high degree of FM misdiagnosis reported, that would be a major step forward.

This isn’t the first study to use the eyes to try to understand fibromyalgia or chronic fatigue syndrome (ME/CFS). An earlier SFN study using a different technique found significant reductions in nerve fiber density in the thin outer layer or cornea of the eye.  Because this part of the eye is not believed to derive from brain tissue it’s not considered part of  the central nervous system.  Dr. Martinez-Lavin suggested that that finding meant nerves may be affected in the muscosal areas (mouth, gut) of the body as well.

Whether similar nerve degenerative processes are causing problems in the cornea and retina and skin of FM patients is unclear. What is clear, thus far, is that the further researchers have probed the more nerve problems they have found.

Evidence of damage to the unmyelinated small nerves in fibromyalgia continues to mount. Several studies had found nerve loss or reduced nerve size in the peripheral nervous system (the skin and corneas of FM patients), but this was the first study to find evidence of small nerve fiber thinning in the central nervous system. Because a similar process occurs in neurodegenerative illnesses such as Alzheimer’s and Parkinson’s disease the authors of the study asserted that FM is a “neurodegenerative” disease.

The ease, cost-effectiveness and non-invasive nature of the test used in this study suggested they could be used as a diagnostic tool to differentiate FM patients from other patients with pain. The subclinical nature of the nerve fiber losses indicated that they were not likely to affect eyesight.