Fluge and Mella seem to be working at almost lightning speed. Besides managing their huge Rituximab study (and all the sub- 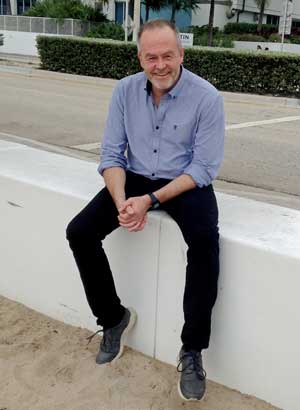 studies within it) and the cyclophosphamide trial, they’re also carrying out large research studies.

For years, of course, some researchers and doctors championed the idea that problems with mitochondrial energy production were at the heart of ME/CFS. For many, though, the idea seemed almost too simple…too easy in a way. The body throws too many curves at us for something so obvious to be the cause. But it may be.

The work of Bob Naviaux of UCSD, Ron Davis of the Open Medicine Foundation, McGregor and Armstrong et. al. in Australia, Maureen Hanson at Cornell, and Fluge and Mella in Norway suggest that problems producing energy could, in fact, be causing the physical and mental fatigue in (ME/CFS).

Some key facts – such as I understand them.

At 302 patients (200 ME/CFS patients and 102 healthy controls) this was a nice big study. A different type of study than the recent metabolomic studies, it used a mass spectrometer to measure the levels of 20 amino acids involved in energy metabolism in the blood.

QT-RCT PCR was used to examine gene expression. Cells were also cultured, dropped in ME/CFS or healthy control’s serum (blood), tweaked with metabolic factors, and their lactate production and cellular respiration was measured.

Fluge and Mella did a simple but telling thing with the 20 amino acids by dividing them into one of three energy production pathways: 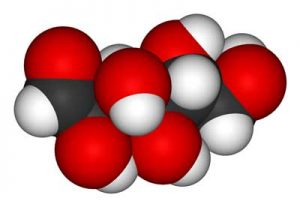 Our cells much prefer using glucose to produce energy but the results and the Aussie study suggest that our cells are turning elsewhere.

Amino acids, unfortunately, are kind of like the body’s last straw for energy production. Our cells would much prefer to use glucose, but even fatty acids are a better source of energy than amino acids. In order for body to use amino acids it has remove an amino group (producing ammonia) and turn them into a sugar.  (The fact ME/CFS patients appear to be turning to amino acids might suggest that they’re having problems with fatty acid metabolism as well.)

There’s another problem, though. If all this unused pyruvate is hanging around, it has to go somewhere. Unused pyruvate gets converted into lactate – a toxin responsible for much of the fatigue and pain associated with exercise. Lactate ultimately gets dumped into the blood stream. Fluge and Mella believe lactate accumulations are probably a key problem in ME/CFS as well. High lactate levels in ME/CFS patients’ brains have been found in several studies but reports on lactate accumulations in the blood are mixed.

Since pyruvate production doesn’t appear to be the problem, the problem must lie in the pyruvate dehydrogenase enzyme complex (PDH) which breaks down pyruvate to produce acetyl-CoA.

Or a Pyruvate Dehydrogenase Kinase Disease?

Fluge and Mella then asked why pyruvate dehydrogenase is not working in ME/CFS and may have found an answer in the increased gene expression (or activity) of the enzymes (PDH kinases (PDK)) that inhibit PDH. Rather encouragingly, they found that increased expression of one form of the PDK enzyme (PDK1) was associated with increased severity and longer duration patients. 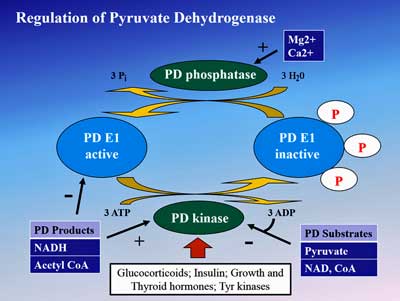 Digging deeper still they found increased gene expression of the transcription factor (PPAR) which upregulates PDH kinase in ME/CFS patients as well.  Then they discovered that the gene expression levels of another enzyme (SIRT4) that limits pyruvate dehydrogenase production were increased as well.

The same problem (low acetyl-CoA levels associated with low PDH and PDK levels) was found in both sexes but men and women appeared to try to compensate for those reductions differently. While women demonstrated across the board depletions in the amino acids used to produce Acetyl-CoA, the depletions seen in men, on the other hand, were minor.

Fluge and Mella noted the small sample size of men  (n=38) could have limited their ability to uncover significant differences but they also found increased levels of a substance in men called 3-Mhis which is indicative of protein breakdown or muscle atrophy in the men.  (If the guys are wondering if their muscle atrophy might be due to more than lack of exercise, the increased levels of this substance could explain why. I’ve long felt that exercise results in a puffy look; could this be due to inflammation associated with muscle breakdown?)

In one of the more fascinating aspects of this study, Fluge and Mella incubated (grew) muscle cells, put them in the serum from severely ill ME/CFS patients or healthy controls, and then analyzed their rates of mitochondrial respiration and lactate production (glycolysis).

They assessed the energy production of these cells under these different scenarios:

When the cells were not placed under any energetic demands they behaved the same whether they were in ME/CFS patients’ or controls’ blood. 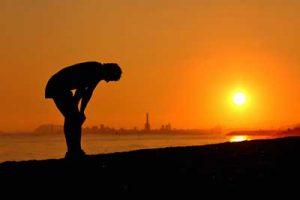 A further analysis indicated that when the cells in the ME/CFS serum were put under a severe energetic strain lactate production increased significantly. This time it was not a slight increase; the graph indicated huge increases in lactate production had occurred.  That is what Fluge and Mella predicted what would happen when pyruvate dehydrogenase stopped working; the unused pyruvate would end up as lactate.

Fluge and Mella suggested that the high oxygen consumption was a compensatory response to the problems with PDH they found. It may be that the mitochondria – missing their normal levels of acetyl-CoA – are sending out the message to get that glycolytic pathway moving to produce more pyruvate and hence more acetyl-CoA. No matter how much pyruvate it’s producing, though, it’s not enough for the mitochondria, because the pyruvate dehydrogenase enzyme has been turned off.

It seemed strange to see the cells in ME/CFS patients’ blood using more oxygen; i.e. being more active rather than less active, but Fluge and Mella’s finding seems to agree with a recent Stanford study that found increased energy production (ATP production) in ME/CFS patients’ cells. The catch was that the increased energy production came mostly from glycolysis rather than from the mitochondria. That appears to be exactly what Fluge and Mella’s study predicts.

The fascinating Stanford study will be covered more in a future blog. In any case, despite the twists and turns, the evidence thus far consistently points an arrow at the early part of the energy production process – glycolysis. Since glycolysis, and ultimately aerobic energy production mostly relies upon carbohydrates, the main metabolic problem in ME/CFS may involve the inability to properly metabolize carbohydrates. That, of course, would seem to make some sense given the problems many ME/CFS patients have dealing with carbs. Similarly, the depletion of ketogenic amino acids in the ME/CFS women suggests that a more ketogenic (i.e. fat and protein-rich, low carb) diet might be helpful.

We’re not at all done with the possible metabolic problems seen in ME/CFS. Fluge and Mella believe and Bob Naviaux’s recent study suggest that problems in fat metabolism in women – the third substrate used by the mitochondria – to produce energy also probably exist, and Chris Armstrong in an email stated that he thought that problems with both glycolysis and the Krebs cycle in the mitochondria exist.

PEM at the Cellular Lever

It’s kind of comforting to see the exertional problems show up even at the cellular level.  As in the exercise studies, the cells in the ME/CFS patients’ blood needed to be put under strain to show significant differences.  It turns out there’s an enormous difference (70-100 fold) between a cells at rest or being involved in strenuous exercise. That kind of leap in action, of course, leaves plenty of room for problems to show up if the energy production process is not working smoothly.

Next up for Fluge and Mella: trying to determine: (a) what in the blood is affecting energy production; and (b) what is turning the pyruvate dehydrogenase enzyme off.

They’re not grasping at straws. Dr. Julia Newton has found that an autoimmune disease called primary biliary cirrhosis (PBC) bears some startling similarities to ME/CFS. PBC is characterized by multiple autoantibodies that impair mitochondrial functioning and target the PDH enzyme complex believed to play a role in ME/CFS. Besides the enormous fatigue they experience, PBC patients also display increased sympathetic nervous system activity, and problems with orthostatic intolerance and cognition are found.

In fact, last year Julia Newton, stating that she hopes the results will be similar to those in ME/CFS, began a Rituximab trial in PBC patients.

Coming up next on HR – more studies are flooding in. Coming up shortly on HR, a look at the Aussie and Stanford studies.

Health Rising’s Big (Little) Donation Drive is Successful! – Thanks to over 214 people who donated we have met (and exceeded) our target :). ( I, of course, am much relieved :)) You’ve ensured that Health Rising will continue to bring you the latest news on ME/CFS and FM research and treatment into what appears to be a very exciting 2017.

Thanks to all who have supported HR this year including Dennis Sylvain for providing research papers, Marilyn for her rapid editing help :), an anonymous friend for her support in many areas, to Stavya for his impeccable work supporting the technical side of HR, to Glori for her artwork, to the Simmaron Research Foundation and Prohealth for their financial support, and to everyone who has provided helpful comments.