Low dose naltrexone (LDN) is becoming more and more widely used in fibromyalgia (FM) and chronic fatigue syndrome (ME/CFS). You can chart that use right back to Jarred Younger’s two small FM trials in 2009 and 2013.

Now Younger’s back with a third trial that aims to do two things: a) further validate LDN’s effectiveness in FM and b) attempt to understand what in the heck this unusual substance is doing in FM patients.

LDN could be working in a couple of ways in FM. It could, by blocking opiate receptors, cause a kind of paradoxical shift that spurs  the production of feel good brain chemicals called endorphins. Younger’s past LDN studies suggested, however, that LDN could be reducing inflammation – something not ordinarily associated with FM. His 2014 study, for instance, found that FM patients with higher levels of a factor associated with inflammation called ESR benefited more from LDN.

Neither the swelling, redness and tissue damage nor the consistently elevated immune factors seen in arthritis, gout and other inflammatory disorders are found in FM but LDN, thus far, has proven most effective in immune disorders like Crohn’s disease.

Younger believes LDN is blocking receptors (TLR4 or others) which are triggering the production of pro-inflammatory substances on microglial cells, creating a “neurotoxic” milieu that results in pain amplification. The many neurotoxic substances microglial cells create (proinflammatory cytokines, substance P, nitric oxide, and excitatory amino acids) could, he believes, account for the wide range of symptoms in FM and ME/CFS.

This is also a small trial – just 8 FM patients – but it extends the data we have on LDN and FM and provides some possible answers to why it’s helping some people.

In the ten-week single-blind, crossover study, the participants were told they could receive a placebo at any time. In reality, none of them did. Symptoms were assessed twice daily and blood samples taken twice weekly. People with overt signs of inflammation (high ESR, c-reactive protein) were not allowed in the study. The participants took one 4.5 mg dose a day, unless they asked to be given less (3.0 mg).

Because not enough study has been done to understand what kind of inflammation is present in FM, Younger simply tested as many cytokines as he could.

While the study was small, its findings meshed with those from past studies. It indicated that LDN works well for some, but it’s not a panacea:  Younger found a 15% reduction in FM associated pain and about a 20% reduction in overall symptoms.  (Younger’s previous study found about a 30% reduction in pain in about 60% of the participants. Younger is not satisfied that the optimum dose for LDN in FM has been found and hopes to do a study to resolve the dosing issue).

An Atypical Anti-inflammatory – For an Atypical Condition?

This almost across the board reduction in pro-inflammatory cytokines suggests that the immune system does indeed play a role in FM. Whatever the immune system is doing in this disease, however, is atypical. Younger has stated that FM doesn’t look like a “classical inflammatory or immune-mediated condition”. Instead, he believes fibromyalgia is mostly a “central (nervous system) immune disorder” telling Donna Gregory Burch “It’s like the central nervous system thinks you have an infection when you don’t”. 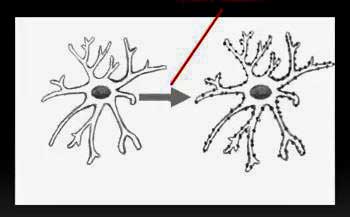 As in chronic fatigue syndrome (ME/CFS), inconsistent cytokine findings have prevented a clear picture of immune dysregulation from coming forth in FM. One possibility suggested by this study is that much of the immune dysfunction occurs in the central nervous system via the microglia. Another is that studies haven’t been extensive enough to capture the many-faceted immune issues underlying FM.

Whatever is happening with the immune sytem, it’s beginning to show up in the research. The small nerve fiber findingspresent the distinct possibility of immune dysregulation. A 2016 study examining neuropeptides and cytokines suggested that neuropeptides might be tweaking mast cells to release pain stimulating substances in FM. A 2015 genomics study reporting that B-cell development (shades of the Rituximab finding in ME/CFS?) and deficiencies in immune signaling (similar to that found in the longer duration ME/CFS patients?) played significant roles suggested that we are far from understanding the role the immune system plays in FM.

Time will tell with FM but the failure of two recent prominent drug trials, and the often poor performance of the current spate of FM drugs, suggests researchers might want to start looking in new places.

Younger hopes to use the data from this study to do a larger double-blinded study. He’s also assessing a wide range of dosages in FM and pairing it with another microglial inhibitor called dextromethorphan. Much bigger LDN/FM studies are needed and one is underway. A 140 person trial in Norway should wrap up at the end of this year. (LDN use in Norway has increased dramatically recently.)