Beck Weathers came about as close to dying and still survive as is possible in the Death Zone of Mt. Everest.  Left for dead three times, Weathers managed to claw his way to camp and eventually get down the mountain with the help of a miraculous helicopter rescue.

Weathers lost his hands but regained his relationships. He called it an excellent trade-off.

Twenty years later, Weathers is still telling the world about the insights he gained on the mountain about the hollowness of success and the importance of relationships. Weathers’s hard-gained insights could apply to anyone but they might have special meaning for ME/CFS/FM patients stuck on their own Everests.

Beck was lucky: his family was willing and ready to return to him once he turned to them.  People with ME/CFS/FM are not always so lucky. How to deal with loss or estrangement when it involves our significant others, family and friends?

Relationships, of course, can and often do get hit hard by ME/CFS/FM. Nobody, neither the patient nor the caregiver nor the significant other, is prepared for the changes that occur when one person has a chronic illness – particularly one as difficult or mysterious as ME/CFS/FM.

Relationships can shatter, leaving significant others and family members estranged and a person with ME/CFS/FM bitter, stressed-out and angry. That’s not a good state to be in for anyone with a disease that affects the stress response system.

Chronic fatigue syndrome (ME/CFS) and fibromyalgia are controversial illnesses that can produce misunderstandings, ruptures in important relationships, anger and just plain mistakes.  In one memorable part of Unrest, a husband left his wife because he thought he was enabling her. He believed that leaving her would force her to get moving again and once she did that she would be fine. (That didn’t work out. He later apologized).

Some compassion for what they are going through might help. Cognitively challenged, fatigued, unable to participate in many activities, we’re not the same people that we used to be. The lives our significant others or family members envisioned having with us have mostly disappeared. That’s an incredibly hard adjustment to make, and compassion for those dealing with it can help.

Toni Bernard suggests letting go the expectations and demands we have that people behave a certain way.  She points out that they often do not! Cultivating equanimity – the understanding that people come from different backgrounds, have their own life histories, etc. which affect their thoughts and actions – can provide some relief.

Toni found that letting go of the hidden ideal that everyone should understand our illness and be supportive brought her relief. (Check out any other hidden impossible ideals (even for the healthy) that may be causing distress…that you should be on top of everything, that you should never mess up, that you should be the go-to gal or guy, or the always supportive spouse, and then try letting them them go.)

One possibility I discovered in Landmark Education courses is to embrace the idea that our relationship with anyone is always wholly dependent on us. That it is possible – not easy – but possible to have a loving or at least neutral relationship with someone who is angry or estranged from you. A famous Buddhist loving-kindness meditation first sends love and kindness to ourselves, then to a loved one, then to a neutral person and finally to a person we’re angry with.  As Toni points out trying to understand where they’re  coming from (frustrated?, confused?, overwhelmed?) is a good first step.

Weathers had been obsessed by his work and he’d been successful; he’d made a lot of money.  Confronting death on the mountain, though, he realized that the drive to succeed, to look good – although it had taken up the vast amount of his time – was ultimately pretty meaningless.

“As I’ve grown older, I gradually achieved a state of peace and no longer define myself by success and goals or really anything external.” Beck Weathers

By the nature of their disease, many – if not everybody with ME/CFS/FM – have to come to grips with “letting go”: letting go of their ambitions, their desire for their life to turn out the way they want it to turn out, their expectations… 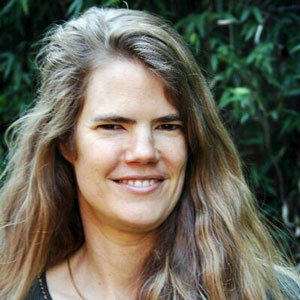 In Death Valley, Julie Rehmeyer let go of her pursuit of personal success and felt a new kind of contentment.

At the end of her rope in Death Valley, Julie Rehmeyer let go. Humbled by the enormity of what she was experiencing, she realized that even as she became sicker and sicker, the hamster wheel of success still dominated her life. Finally, she declared that her striving was over, let her ambitions, plans and desires go – and felt an immense relief.

I couldn’t keep everything together as I had been doing for years, holding on to my responsibilities and dreams in spite of the barriers my illness threw in my path. Whether the experiment worked or didn’t, the life I had lived was over. I was staring into a cavernous darkness, beyond any imagined future I could invent. I wrapped my arms around my dog and closed my eyes. Okay, I thought. Whatever is next, okay.

Julie’s ability to give it all up – her ambitions, her desire to succeed, even the desire for her life to be different – opened a new space up for her. For the first time in years, she felt content.

The contentment felt unfamiliar, even a bit shocking. An anxious internal drive had prodded me forever, but I only noticed it in the desert, once it was gone…I had always imagined that contentment would come as the natural end product of accomplishing my goals, but I never seemed to get there…

With all my assumed obligations removed life seemed unimaginably spacious. Just being alive was a thrill, a blessing, a tiny miracle beyond my expectation or control… 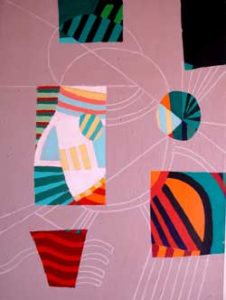 How to live with a life turned upside down? Painting by Ted Johnson.

Having to be “successful” is an incredibly powerful pull – one that does not necessarily disappear once one gets sick. As Beck Weathers found out, success is a chimera. He realized he was on track to be “successful”, alone and unhappy.

In her book, “How to Live Well with Chronic Pain and Illness: A Mindful Guide“, Toni Bernhard talks about “Making Peace with a Life Upside Down”.

Despite the fact that illness does inevitably happen to a certain segment of the population, it’s never supposed to happen to us.

We’re not supposed to be unable to work, or clean the house, or see friends, or go out with the kids.  It’s easy to spend years, decades even, ruminating over the many “not supposed to’s” or the “supposed to’s” that have been shattered by these diseases.

That, however, is the path to resentment, anger and isolation, and – studies have found –  increased pain and fatigue. Bernhard, like Rehmeyer, felt a sense of relief and contentment when she was able to drop the “supposed to’s” and just accepted – fully accepted – her life as it was.

“I vividly remember the first moment when I accepted my life as it is – chronic illness included. I felt a huge burden lift. For the first time since I became sick, the conviction that I absolutely needed to recover my health in order to ever be happy again was absent.”

She promised that mindfulness can produce something extraordinary:

“We can learn not to be lost in painful regrets about the lives we no longer lead, nor to be overwhelmed with fear and worry about the future. We can move from being caught in relentless stress…to a place of peace with our lives, however that life happens to be at the moment. “

In “Radical Acceptance”, Tara Brach, a Buddhist facing her own chronic illness, suggested that when faced with difficulties, we simply acknowledge them by saying “I consent”.

Weathers’s story was incredibly inspiring. Like many people with ME/CFS/FM, the medical profession gave up on him, and in fact, signed off on his death warrant.  Against all odds, though, Weathers was able to survive.

Weathers’s story indicates miracles do happen at times, that serendipity can strike, that helicopters can appear out of the mist at 20,000 feet. Unforeseen discoveries and assistance (the Pineapple Fund’s $5 million donation to the OMF) can happen. We should never discount the possibilities of miracles happening.

Although Weathers got off his mountain, most of us remain on ours. We have our Everests to deal with. Some of Weathers’s realizations while on the mountain could help make our way easier.

There was the critical need to keep putting one foot in front of the other – to stay in the game, so to speak – and not give up even when all is black. Beck shouldn’t have survived, but miracles – unexpected events – showed up. You never know what the future will bring.

There was the need to take responsibility for the mistakes he’d made in his relationships. For people with ME/CFS/FM, that might take the form of creating compassion for and forgiving those around us. Finally, there was realization of how empty striving to be a success turned out to be for Beck. That could be a profound lesson for many of us disturbed by our lack of it.