Pressure Mounting: Is Fibromyalgia Caused By High Pressure in the Brain (Intracranial Hypertension)

We propose that chronic idiopathic spinal fluid pressure dysregulation underlies both FM and the clinical entity of symptomatic Tarvlov cysts, which both present as peripheral neurological disorders. The authors

This is the third in a series of blogs providing overviews of new hypotheses for fibromyalgia and chronic fatigue syndrome (FM, ME/CFS). (It is also part I of a three part head and neck series on fibromaylgia and ME/CFS).

Whoever ends up explaining fibromyalgia is going to have to explain the wide variety of symptoms found in it. A group from Belgium – a country not particularly known for its biological interpretations of diseases like chronic fatigue syndrome – believes that FM patent’s brains and spinal cord are under too much pressure.

More specifically this group believes that high spinal fluid pressure in the sleeves of the spinal nerve roots of FM patients is compressing those nerves causing a “polyradiculopathy” or pinched sensory nerves across the spine. These pinched sensory nerves are in turn causing pain and other symptoms across the body.  The difference between these pinched nerves and the pinched nerves we ordinarily think of is that spinal fluid pressure, not structural problems, are the cause.

Is fluid buildup in the nerve roots of the spinal cord causing symptoms in fibromyalgia?

Certainly something is going on in the head and upper bodies of FM patients. Upper body pain, feelings of pressure in the head and head pain are common. The researchers argued that the peripheral neuropathy (numbness, tingling, electric shocks, burning sensations, allodynia, weakness) and reduced muscle strength studies have found could all be caused by increased spinal fluid pressure.

Interestingly, they propose that the deep muscle pain FM patients sometimes feel could be due to damaged and/or lost small nerve fibers in their sensory nerves. (Dr. Oaklander has also proposed that small nerve loss inside the body may be causing many symptoms in FM.)  They believe that high levels of pressure are causing degeneration of the sensory nerve roots. Nerve conduction studies showing demyelination is present in some FM patients buttress, they say, that finding.

The authors also propose that the gastrointestinal problems so common in fibromyalgia could be caused by compression of the nerves in the lower spine.

The authors believe Tarlov cysts provide a kind of buffer for the sensory nerves against the increased cerebral spinal fluid pressure emanating from the spinal cord.  (Tarlov cysts are also believed to result from inflammation, trauma or disease).

When small, these cysts often cause no symptoms, but when they are larger they can, by putting pressure on the sensory nerves, cause pain, tingling, muscle spasms, muscle problems, and/or pinched nerves. For some reason, women are more likely to suffer from them.

The Intracranial Hypertension Research Foundation reports that Chiari malformation, which occurs when a bone in the back of the head is pushed down into the spinal column, blocking the circulation of spinal fluid, may be more common in people with IH. Chiari malformation has been found in some FM patients. One 200 person+ study, however, found that FM patients had about the same percentage of chiari malformation (@3%) as the healthy controls.

The cerebral spinal fluid fibromyalgia hypothesis is interesting given the small 2013 chronic fatigue syndrome (ME/CFS) study suggesting that high intracranial pressure and headaches are common in people with ME/CFS.

Twenty percent of the 20 study participants meet the international criteria for idiopathic intracranial hypertension (IIH) and so were reclassified as having that condition, and treated.  Even more interesting were the 85% of ME/CFS patients who, without having high spinal fluid pressures, nevertheless benefited from reductions in spinal fluid pressure.

None of the responders had the major clinical signs (papilloedema, visual disturbances) doctors look for to suspect IIH. When their spinal fluid pressure was reduced, they reacted just like IIH patients do – they felt better; i.e. they experienced reduced headaches, heightened alertness and reduced fatigue that lasted anywhere from a couple of minutes to several weeks.

Dr. Higgins concluded that the normative values for IIH are probably incorrect and that some people, perhaps many people, suffer from IIH at far lower cerebral pressures than is currently expected. They also display different symptoms (little eye involvement) from traditional IIH patients.

In a recent blog, ME/CFS/FM/POTS/EDS patient, Caroline Christian, reported that her Stanford neurologist suspected she was suffering from spontaneous leaks of spinal fluid and “pseudomotor cerebri” or excess cerebral spinal fluid and increased cerebral spinal fluid blood pressure. People with this condition usually have worsening head pain when their head is slightly lower than their body.  Dull headaches, often at the back of the head and worse at night or first thing in the morning are common.  The increased pressure can produce temporary problems with blurred vision or even blindness and double vision.

Personally, Dr. Higgins’s study and the FM hypothesis brought to mind a spinal tap which left me feeling unusually relaxed and clear for a couple of hours. I also know of a person whose ME/CFS/POTS virtually disappeared for three weeks following a spinal tap. A Canadian doctor is reportedly working on a paper highlighting the unusual changes she sometimes sees in her ME/CFS/FM patients after spinal taps.

Unfortunately, assessing cerebral spinal fluid pressure is not easy (it usually requires a spinal tap). Plus, as we’ve seen, normative CSF pressure values may not be very normative in ME/CFS/FM and some people with seemingly normal CSF values can benefit significantly from a reduction in pressure.

The authors of the article suggested that the following tests be done to assess the presence of high intracranial pressure: spinal tap, sensory testing using a pin-prick test, strength testing, knee and Achilles tendon reflexes tests, a tandem gait test, a revision of the MRI to detect possible nerve root dilations and TCs, NCS/EMG, and measurement of the retinal nerve layer thickness using an optical microscope. 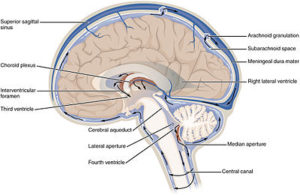 The Intracranial Hypertension Research Foundation reports that spinal fluid pressure rises when the body can no longer effectively absorb or drain it. Ray Perrin has some ideas about that – his work will form the second part of HR’s FM and ME/CFS Head and Neck Series.