Few studies ten years ago considered the gut and its flora in the context of chronic disease. Now microbiome studies are popping up in just about every disease. The “gut-brain” axis is a real thing. The bacteria in the gut appear to be able to affect brain functioning in a number of ways.

Somehow no one has examined the gut bacteria in fibromyalgia until now. That’s a head-scratcher give that gut pain is common, the rate of both irritable bowel syndrome in FM, and leaky gut syndrome – both of which may be associated with altered gut flora – appear to be increased.

Plus, several metabolomic studies – including one published this year – pointed arrows straight at the gut. It was remarkable to see gut (and energy) metabolites – not metabolites associated with the central nervous system – pop up so significantly in these broad metabolite surveys.

It’s possible that the central nervous sensitization paradigm is simply eclipsing interest in other areas. If so, it’s a shame; the FM first gut microbiome study – coming out of Montreal, Canada – was a good one. Not only were the results interesting but the fact that they dovetailed in some cases with chronic fatigue syndrome results was encouraging. Hopefully this study will inspire others.

Researchers from McGill University and University of Montreal took the prize – they completed the first fibromyalgia gut microbiome study ever. (By DarkFireTaker – Own work, CC BY-SA 3.0, https://commons.wikimedia.org/w/index.php?curid=41633779)

In this Canadian study, the fecal matter of seventy-seven “meticulously” assessed FM patients and 79 healthy controls – all age, sex and gender matched – was compared.

Broadly speaking, the overall structure and diversity of the FM patients’ gut populations were similar to those of the healthy controls. When the researchers dug down, though, differences emerged.

Significantly altered levels of nineteen bacterial species in the FM patients were enough for a “machine-learning” tool to be able to accurately diagnose most of the FM patients.

The fact that levels of several of the bacterial species were statistically significantly associated with a wide variety of symptoms such as pain intensity, pain distribution, fatigue, sleep disturbances and cognitive problems suggested that these bacteria could indeed be contributing to some of the major symptoms found in FM.

It was intriguing to see reduced levels of the butyrate producing bacteria Faecalibacterium prausnitzii in both this study and an ME/CFS one.  This odd bacteria – the sole species in its genus – does not produce spores, moves around very little, but is one of the most common bacteria in our guts.  Through its fermentation of dietary fiber it produces butyrate and other short-chain fatty acids.  Low levels of F. prausnitzii have been associated with Crohn’s disease, asthma, depression and now ME/CFS and fibromyalgia. 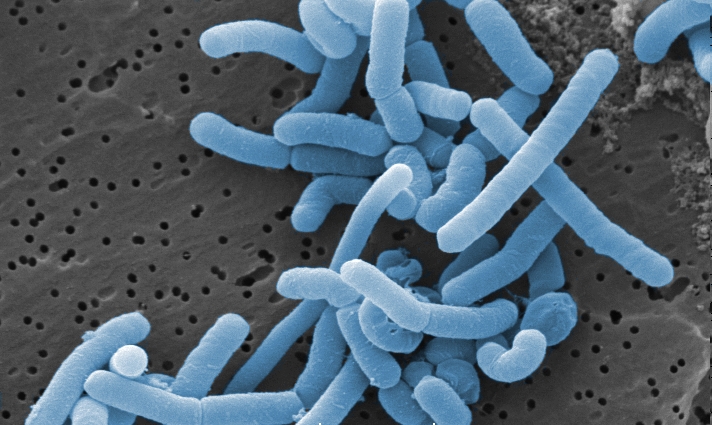 Given the large role this bacteria plays in the gut and its effect on three potentially important areas in these diseases – reducing pain, reducing inflammation, and enhancing the intestinal barrier – it must be rising to the top of the list of potential bacteria to enhance in these diseases.  F. prausnitzii and other gut commensals that metabolize dietary fibers are being introduced in a number of diseases in an attempt to tamp down the inflammation associated with autoimmunity. A blog on this interesting bacteria will be coming up.

Fibromyalgia also bucked a trend when researchers found reduced levels of several inflammatory bacteria (Bacteroides uniformis, H. parainfluenza, P. copri and others) that have been associated with other rheumatological diseases such as osteo and rheumatoid arthritis. (Neither fibromyalgia nor chronic fatigue syndrome (ME/CFS) have displayed the kind of inflammatory profiles seen in rheumatological and other inflammatory disorders.)

The authors were careful to point out that their findings do not at all prove causality: i.e. it’s not clear that the altered bacteria found in FM is actually causing the increased pain, fatigue, etc. They could, for instance, be an outcome – a side effect if you will – of whatever is really causing the pain. This study, though, provides a good beginning point.

In contrast to the FM study, the Giloteaux/Hanson study found reduced gut flora diversity in ME/CFS and a reduction in butyrate producing bacteria. Like the FM study, it was able to use machine-learning to accurately diagnose ME/CFS patients. It also provided evidence validating the possibility that increased gut permeability that could spark inflammation is present – something that needs to be looked at in FM. Other studies have indicated that exercise – the bete noire of ME/CFS – increases gut permeability.

Two-way Street – the Central Nervous System, the Gut and Disease

In one way, the fibromyalgia finding wasn’t a surprise at all. Fibromyalgia is simply joining a club that, if not for its poor funding, it would have joined long ago. Altered bacterial populations have been found in irritable bowel syndrome, chronic fatigue syndrome, chronic pelvic pain, rheumatoid arthritis and other chronic pain disorders. Why not fibromyalgia?

The findings in these diseases are taking place against a backdrop of research that  is becoming increasingly tantalizing. One would never think, for instance, that a stroke – a disruption of blood flow that injures the brain – would affect the bacteria in the gut but a recent mice study found that stroke somehow resulted in increased levels of inflammatory bacteria in the gut.

Similarly, traumatic brain injury appears to result in increased intestinal permeability which then works to increases the inflammation in the brain. That finding could help explain why people with TBI have increased incidence of digestive problems. Dementia is another central nervous system condition which increasing evidence suggests the gut is in some way involved.

A remarkable 2017 study found that magnetic stimulation of the brain resulted healthier gut flora with more anti-inflammatory elements. These studies indicate the gut-brain axis goes both ways: problems in the gut impact the central nervous system and vice-versa. It’s as if a disease state has been put in place which is maintaining itself in different parts of the body. Injure the brain – and the gut is affected in a way which furthers the injury in the brain (!)

It’s possible that alterations to the gut flora are part and parcel of having a chronic disease. That would suggest that chronic diseases are probably best treated by hitting multiple systems, and that one way to fight back against brain issues, including neuroinflammation, may be to improve gut functioning.

Could the Gut Cure Neuroinflammation? An M.S. and ME/CFS/FM Inquiry

The upside of all this research is our increasing understanding of the important role the gut plays in health. The downside is how far we still have to go to unravel the incredible complexity of the gut. We still haven’t identified all the species (let alone all the strains) found in the gut, and our understanding of how to effectively manipulate the gut microflora is poor. The findings are so enticing, though, that research dollars will surely continue to pour into this field and it’s likely to progress quickly.

Would That it Were Not True…
But Health Rising Relies on Your Support to Stay on the Web.
Please Contribute