“A Demon on My Life” Gets It Right About ME/CFS: A Review

“A Demon on my Life” is a play about a couple grappling with the effects of the wife’s ME. Written and directed by JB Bruno, it premiered on June 20th, with an encore performance on June 22nd.

It was presented live online, via Zoom, with plans for theater performances in New York, plus livestreaming to select ME audiences unable to attend in person.

Cort Johnson announced it in an article on Health Rising, describing Bruno’s explanation for how the idea came about. It is now available on YouTube (see below).

“A Demon on My Life”: Online Play about ME/CFS to Air Soon

I’d never seen a drama about an ME patient before. I haven’t read any fiction about one either. Only the emphatically non-fiction world of medical conferences and science articles, with a few documentaries. Before watching it, I was somewhat skeptical about what it might be like. How to portray, in an interesting and watchable way, a sick person who spends most of their time lying down, unable to leave their house? And to put it on live, via Zoom? And yet, this group (director/writer, cast and crew) has accomplished this – the play, dedicated to ME patients, tells an interesting, emotionally powerful story centered around a young woman, Liz, who has been sidelined by ME from her career as a dancer, and her husband, Mark.

Leigh Fitjzames as Liz, and Darren Lee as Mark, her husband – grappling with the changes in their lives.

Liz is sympathetic and engaging in the co-lead role and so is her supportive husband, Mark, the other co-lead. She is an independent woman, in a good relationship, and should be in the prime of her career were it not for the collapse of her health.

There are many situations and conversations that will ring true to ME patients and their caregivers. Together, they face a medical appointment with a disbelieving doctor and another quasi-medical appointment with Tom, an energy healer of sorts, whose fees cause Mark to go to his parents for financial help. Although they provide this help, we see the additional societal pressure he is under when in private, his mother urges him to put Liz into care, something he firmly refuses to do. 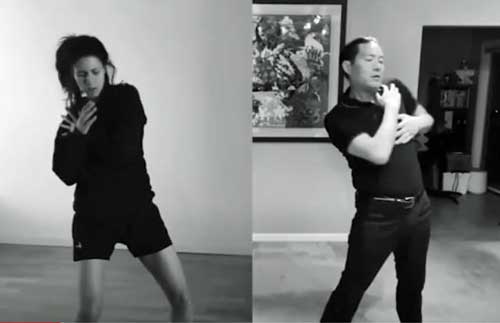 They attend a party with all the difficulties inherent for an ME patient who may look well, but is not, and has so many limitations (e.g. alcohol intolerance) that can’t really be discussed without bringing the party to a halt. They talk about the creative work they used to share in professional dance, he still working, although having missed dance tours and professional opportunities due to his caregiving duties.

They even have “the talk”, where the ME patient despairingly addresses the sacrifices made by their partner in another situation many ME patients will find familiar. Mark says: “What I gave up is nothing compared to what I got when I met you”, reminiscent of Jen Brea’s husband‘s expression of his love and support to her in the documentary film, “Unrest“.

Liz and Emmy Jones as Katie – her ME buddy.

Liz has an online-only friendship with a younger, and more severe bedbound ME patient, Katie, that will likely strike a chord with many: online or phone-only friendships abound in the world of many ME patients for whom meeting in person is physically onerous, if not impossible. It is through Katie that we learn about the concept of ME as “a demon on my life”, from a more than slightly terrifying painting.

The play gets into even more serious territory when Liz and Mark indicate they have discussed before the topic of suicide in ME. It’s good that the play did not shy away from this topic, but even with its inclusion, it should be noted that with all the difficulties Liz and Mark face, it still tells the tale of a relatively fortunate ME patient, one who has a supportive partner who stays. They do address the financial concerns caused by a disease which is permanently disabling for most, but the truth is too many patients are alone and living in poverty. 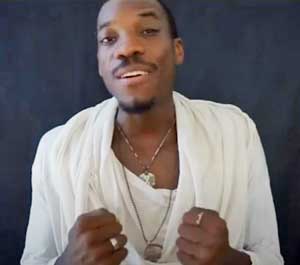 In a moment of relatively improved health, Liz decides that, even if she cannot then perform it herself, she will choreograph a piece. That doesn’t entirely work out, and the play is better for resisting the desire to have things tied up into a neat, perfect bow (i.e. oh well, the dancer can continue to choreograph: she’s fine and her life goes on much as before). This is not, as we know, the way life tends to go. Every day brings its challenges.

Bonnie, their wonderfully supportive boss at their dance company and close friend, gently encourages Liz, in a Buddhist manner to focus on “the now” versus the past and the present – and that does bring Liz some comfort.

There’s no breakthrough in health for Liz, though. Indeed, the part of the play featuring Liz’s apparent breakthrough – and then her devastating crash – makes it clear there will be no easy exit for Liz from M.E..  Evoking the empty shoes annually displayed in Millions Missing campaigns, Liz plaintively says she does not want to disappear. The play ends with the possibility of Liz building a more satisfying, while very limited life, but it’s obvious that she and Mark have much work ahead of them.

Bruno wanted an honest, positive ending, but didn’t want to be false – he succeeded. He wanted to tell the story of people who must deal with a very difficult disease, usually permanent and without proven treatments, in a disbelieving world – he succeeded. 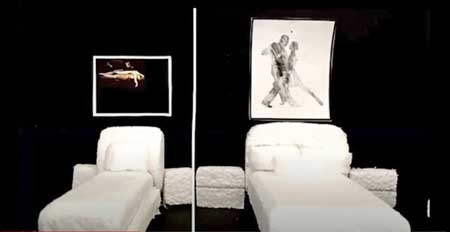 The cast did a truly wonderful job in this play. The crew responsible for putting the play on live via Zoom enhanced it greatly with the beautiful and creative “sets” (exquisite miniature dioramas) used in between acts and, minus the Zoom window shifts in between acts, I easily forgot I was watching Zoom. You have to use your imagination as an audience member, but they showed brilliantly that with talented actors, it can be done.

In the Q&A sessions after each live performance, the writer/director, cast and crew demonstrated their curiosity and empathy about ME and they deserve a big thank you for taking this on. Several mentioned they had known absolutely nothing about the disease before signing on. Included among special guests at the Q&A sessions were Robie Robitaille, an ME patient and activist and her father Robert, both with the Massachusetts ME/CFS & FM Association. 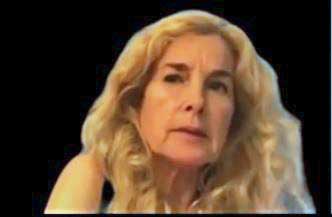 Blanche Baker as Bonnie – the mentor.

After the second performance, Dr. Courtney Craig, an ME patient and healthcare provider, was a special guest. The Zoom conference comments indicated the play was well received by the audience and Bruno mentioned that he had received such a positive response that he is planning to set up a new Facebook group for further discussion. They received about 400 reservations to watch both performances.

So, the play made me cry and I am still thinking about it later – and wondering what will happen to Liz and Mark (A Demon On One’s Life, Pt. II?).  Bruno leaves his audience with a realistic sense of how life-upending ME is: there’s no doubt ME is a serious disease. And he gave us a new, lingering, and evocative metaphor for this disease – this demon on our lives — it just might stick in our community.