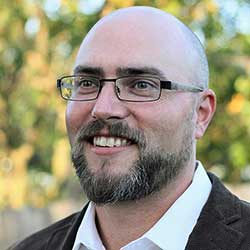 Travis Craddock headed up the project. (Image from Univ of Miami)

Travis Craddock heads Dr. Klimas’s biocomputational modeling team at the Institute for Neuroimmune Medicine (INIM) at Nova Southeastern University. This is the team responsible for crunching the hundreds of thousands of data points gathered from Dr. Klimas’s intensive exercise studies into a massive model of how the immune, neuroendocrine and other systems interact in the body.

It’s takes a village – a research group of biocomputational experts – and in this case, a supercomputer. It was this team and their work which Dr. Klimas used to gather some monster Gulf War Illness (GWI) grants and design some novel clinical trials.

The study was different in several ways The team dove headfirst into a pile of genetic data and emerged with something completely out of the blue. Something which could make you rethink this disease.

Plus Craddock et. al. didn’t use a dataset that cost $100,000 to produce. The genetic data that produced this surprise finding was a generous gift from the ME/CFS community.

“The Great Chronic Fatigue Syndrome Community Gene Study” which produced the data (known to the people who created it as the “ME/CFS Genetic Database Study”), consisted entirely of genetic information provided by patients from their 23andMe or Ancestry.com datasets.  It came out of a community project launched by Dr. Klimas’s team.

Craddock spoke about his early results about 1 hour and 55 minutes into INIM’s recent 3-hour webinar.

The study had already found evidence of a heritable defect in the methylfolate (MTHFR) gene in ME/CFS. That wasn’t entirely unexpected but no one anticipated the sticky situation which turned up in the latest analysis.

A remarkably large proportion (77-80%) of individuals with ME/CFS were found to have alterations in the genes that produce mucous. Yes, mucus. Gooey, gummy, gloopy mucous – in scientific terms, a “complex dilute aqueous viscoelastic secretion”  or “viscous gel” –  otherwise known as phlegm. Mucous generally doesn’t get much respect but it actually plays a critical role in our health.

Mucous lines our nose, our airways, our gut, our eyes. It traps and provides a vital barrier against chemicals, viruses, molds. It also protects against dehydration, physical injury, etc. It also contain immune factors to fight off any nasty pathogens or mop up any toxins. Without our protective mucosal barriers, our bodies would be inundated with toxic or pathogenic substances. 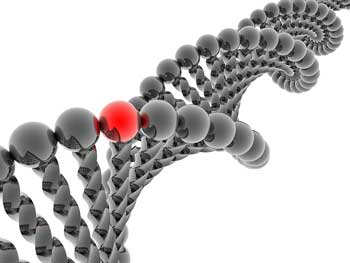 One of the genetic alterations Craddock found was noteworthy indeed.

Over 100 proteins are found in mucous, which make the concentration of defects Craddock found in ME/CFS – all in the genes that produce the mucus 19 proteins – rather noteworthy.

Small alterations in these genes have been tentatively associated with Sjogren’s Syndrome – which some believe is dramatically underdiagnosed disease in postural orthostatic tachycardia syndrome (POTS) and allied disorders – as well as in Crohn’s disease and asthma.

There are alterations in genes and then there are ALTERATIONS. Most small genetic changes make little or no difference. Others dramatically change the functioning of the protein they produce. One of the genetic alterations fell into the latter category. It was about as deleterious as a genetic alteration can get: people with this gene (I couldn’t tell what percentage of patients had it)  produce a puny, truncated, probably wholly dysfunctional protein that is a third the size of normal.

This isn’t the first time, though, that ME/CFS researchers have given the nose a sniff.  About a decade ago, James Baraniuk spent several years probing, tweaking and trying to understand what was going in the nasal passages of people with ME/CFS. 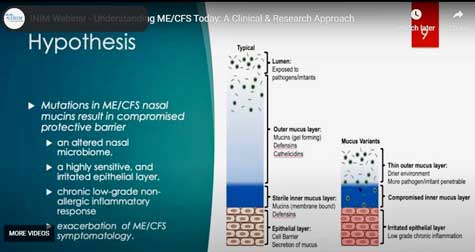 The mucous alterations seen were found in the outer gel layer.

Baraniuk was unable to find any evidence of swelling or blockages in the noses of ME/CFS patients that could explain the feelings of pain, heaviness and congestion they typically experienced. Nor was he able to find any signs of inflammation (total protein, NGF, TNF-a, IL-8), mast cell activation or an allergic reaction (increased IgE levels) that could explain why the middle area of their faces were so sensitive.

Baraniuk concluded that most people with these diseases were suffering from something called idiopathic nonallergic rhinitis (iNAR).

Eight years ago, long before the SFPN news in FM hit the fan, Dr. Baraniuk asserted that damage to these same small nerve fibers (type C neurons) was causing the mid-facial pain he’d found in ME/CFS.

Eventually, even minimal sensory inputs from the nose became translated by a centrally sensitized brain into sensations of pain, nasal heaviness and congestion – a congestion Baraniuk called “phantom nasal congestion” – which he likened to phantom limb pain.

Baraniuk went even further, though. Noting that a form of rhinitis called “dysautonomic rhinitis” was common in ME/CFS, Baraniuk even attempted to tie together autonomic issues caused by the brain stem with the dysregulated processor of sensory information – the thalamus – and the nose.

Eight years later, out pops mutations in genes that produce the protective mucous layers in the nose and other areas.

These 19 proteins form the outer gel layer of the mucous which prevents toxins, pathogens, and irritants from getting close to the skin layer where the nerves are. 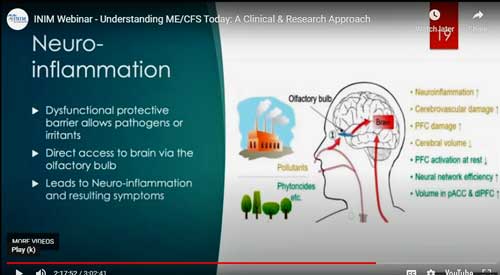 Craddock speculated whether a dysfunctional mucous layer might be contributing to neuroinflammation in ME/CFS.

Craddock proposed that the compromised gel layer could result in an altered microbiome in the nose, could be irritating the nasal membranes, and could be producing a chronic low grade non-allergic inflammatory response. The irritated nerves that result could produce   increased sensitivity to chemicals often seen.

Craddock noted that a weakened mucous layer could allow pathogens, toxins and other compounds entry into the blood (leaky nose syndrome?) and producing a systemic reaction which flares up other ME/CFS symptoms.

Craddock and his team – clearly excited by the their findings – have gone so far as to produce a logic model which tracked what would happen if someone with a compromised mucous layer allowed a pathogen to get across the gel layer. The model produced one healthy state (pathogen is fought off and everything returns to normal) and two unhealthy states – one of which included an innate immune system that is primed and ready to act up at the slightest stimuli. (That would include an over-activation of the NK cells (leading, one might think, to NK cell exhaustion and the reduced cytotoxicity found in ME/CFS.)

Another possibility, though, looms large – neuroinflammation. As Health Rising recently noted in a blog on using intranasal compounds to treat neuroinflammation and other brain issues, the nose provides pretty much a straight shot into the brain. Add a damaged mucosal protective layer in the nose, and an altered nasal microbiome with a quick pathway into the brain, and perhaps you have dangerous substances (pathogens, irritants, toxins) getting access to the brain and producing neuroinflammation.

It’s an intriguing hypothesis which needs a lot more validation. Craddock et. al. hope to perform more precise genetic analyses, examine the ME/CFS nasal microbiome, analyze the composition of mucous in the nose or the tears and improve the model they’re using.

Like the Gene Study – Health Rising is Community Supported.
Your Support Keeps Us on the Web