Using magnetic fields to treat the brain sounds more than a bit woo-woo. The brain, though, is an electrical organ. Our central nervous system uses tiny bits of electricity – electrons – to send signals whizzing around the brain, and electrons in turn create magnetic fields, which in turn, can alter electrical currents. 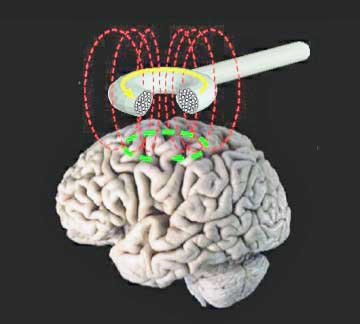 Transcranial magnetic stimulation (TMS or repetitive magnetic stimulation – rTMS) produces brief magnetic pulses which alter the electrical currents in the brain.  At first TMS was used in behavioral disorders like depression, but over time it’s come to be used in other central nervous system disorders.

TMS has been used to reduce depression and fatigue in multiple sclerosis and TMS significantly reduced episodes of “freezing” in which people with Parkinson’s Disease find them themselves unable to move. TMS appeared to be able to do this by increasing connectivity between the supplementary motor (e.g. movement) area and other parts of the brain.

The brain is a complex organ, however, and the dorsolateral prefrontal cortex (DLPFC) is not only involved in pain control but also pain detection. Activity in the left side of the DLPFC has been associated with increased sensations of the unpleasantness side of pain. (The sensation of pain unpleasantness is distinct from the sensation of pain.) Increased DLFPC activity has also been associated with allodynia – a common problem in FM.

It’s possible that both pain activation and pain inhibition are regulated by the DLPFC. Activating one DLPFC circuit appears to result in increased pain catastrophizing and an intensification of pain, while activating another circuit results in increased pain control and reduced pain.

Figuring that the DLPFC in FM patients’ brains were already too active, this fibromyalgia study used low frequency TMS. It was hoped that calming the fires in the DLPFC would translate into reduced activity in other brain organs involved in pain production including the thalamus, brainstem, insular and cingulate cortices.

TMS was delivered over the right DLPFC of 45 FM patients for 27 minutes a day for 5 consecutive days/weekly for 4 weeks. (A sham TMS protocol was delivered to 45 more FM patients.) The patients were followed for a full six months – an exceptionally long time for a study like this – to see if the effects were long lasting.

The primary outcome of the study was something called the Numerical Pain Rating Scale (NPRS) which assesses pain on a 1-10 scale (1=no pain; 10=worst possible pain).

The participants given the real TMS are represented by the darker boxes.

Pain-related depression and anxiety were also significantly reduced in those given the real TMS treatments.

The researchers also provided an objective assessment of pain using something called the nociceptive flexion response (NFR). There’s no other way to objectively assess pain without causing it, and that’s just what they did.

NFR is assessed by electrically stimulating a nerve in the biceps femoris muscle in the thigh. The test assessed the degree to which that muscle jumps in response to the painful stimulation. The magnitude of the reflex is related to the intensity of the pain evoked. 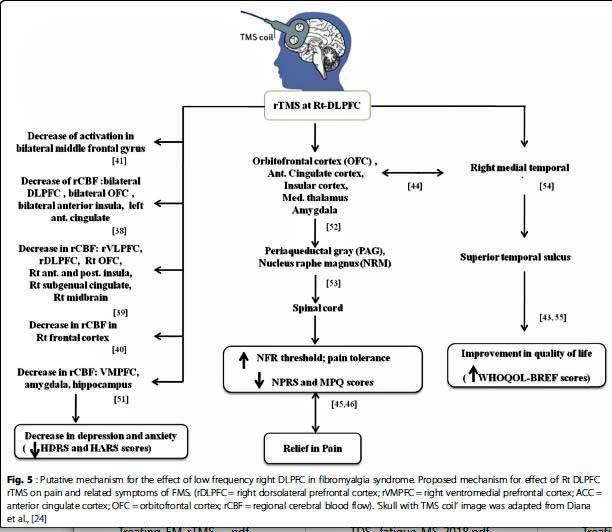 The many different areas of the brain that may be being affected by TMS (from the study).

The researchers only did this test once 15 days after the TMS sessions had concluded. The biceps muscle of those getting the real TMS treatment was much less sensitive to the electrical stimulation (i.e. jumped at a higher level of stimulation.)

According to Clinicaltrials.gov, eight studies assessing the effectiveness of TMS in FM are underway: four in Brazil (!), two in Spain and Israel, and one in the U.S., in Charleston, Mass.

Unfortunately, while TMS Advantage website recommends TMS for FM, it states that insurance does not cover TMS for fibromyalgia.

This study was noteworthy because it suggested that the effects of TMS, if done intensively over a month or so, may be long lasting – something the insurance companies might find helpful.

Of the 10 TMS randomized control trials in FM (including this latest one), seven have had positive results. A 2017 meta-analysis, however, did not find that rTMS produced clinically meaningful reductions in pain. A 2016 meta-analysis found significant improvements in quality of life and a trend toward reducing pain. That review highlighted a key issue: the need to determine “optimal treatment protocols.”

The field is plagued by an abundance of variability. Studies have not consistently used the same frequency or aimed at the same areas of the brain. In contrast to this recent study, most studies have used high-frequency or stimulating TMS aimed at different areas of the brain such as the motor cortex or the left dorsolateral prefrontal cortex (DLPFC) (three studies).

Another approach concerns the use of multi-coil (as opposed to single-coil) magnetic stimulation to reach the deeper parts of the brain. A 2013 study found this approach significantly reduced pain for at least four weeks following the 20 rTMS sessions.

A European Commission recently published “Evidence-based guidelines on the therapeutic use of repetitive transcranial magnetic stimulation (rTMS)” on a variety of conditions. They concluded that there was Level B evidence (of probable efficacy) for using high frequency rTMS on the left M1 (motor cortex) or DLPFC in fibromyalgia.

With brain stimulation techniques becoming more refined, and with the NIH’s SPARC initiative (Stimulating Peripheral Activity to Relieve Conditions) taking a deep dive into the nerves in the bod, it’s possible that over time we will see more and more effective ways of non-invasively and safely modulating the bodies electrical fields for better health.

This study suggested that TMS can significantly reduce pain as well as anxiety and depression – but what about fatigue? If TMS can reduce pain in some people, could it also affect the fatigue in ME/CFS and other diseases? A blog on that is coming up shortly.