Fatigue has been a mystery to the research world. Take multiple sclerosis (MS) – one of the most fatiguing diseases known. Fatigue is often one of the first symptoms that shows up in MS and it’s often the most troubling symptom MS patients experience, yet the fatigue in MS isn’t associated with the nerve lesions that cause the movement and other problems found in the disease. 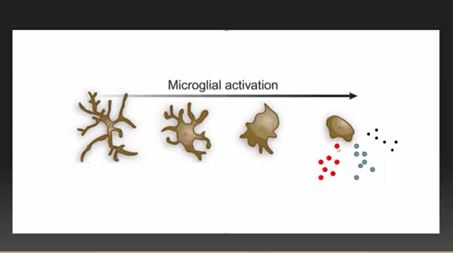 Despite the lack of correlation between nerve lesion damage and fatigue, fatigue worsens as the disease progresses. It’s clear that several parts of the brain are affected in MS – the location of the lesions (usually in the supratentorial and perivenular areas and around the spinal cord in the neck) – and somewhere else.

Recently, Anthony Komaroff pointed to a possible fatigue center in the brain, elucidated by a multiple sclerosis study. The fact that the study, “Regional microglial activation in the substantia nigra is linked with fatigue in MS“, came from a now pretty familiar location – Harvard’s Brigham and Women’s hospital – which Ron Tompkins, David Systrom and other ME/CFS researchers are associated with – highlights again how useful it is to have ME/CFS researchers embedded in major medical centers.

This was kind of a hybrid hypothesis-driven exploratory study. Since all we know for sure, regarding the fatigue in MS, is that it’s not coming from the nerve lesions – the study needed to be exploratory. The study authors, though, had a hunch: microglial activation and the neuroinflammation it was causing was producing the fatigue. That idea, of course, fits right with similar speculations regarding ME/CFS/FM.

Because the site of the neuroinflammation was unclear, Medical Express reported that the researchers used what they called a “snooper” – a PET scan which used a radiolabeled “detective” or tracer  ([F-18]PBR06 radioligand) to bind to activated microglial cells. This was the first time microglial activation was assessed with regard to fatigue in MS. Not knowing where to look, they looked everywhere – and their finding, from an ME/CFS perspective, anyway – was astounding. 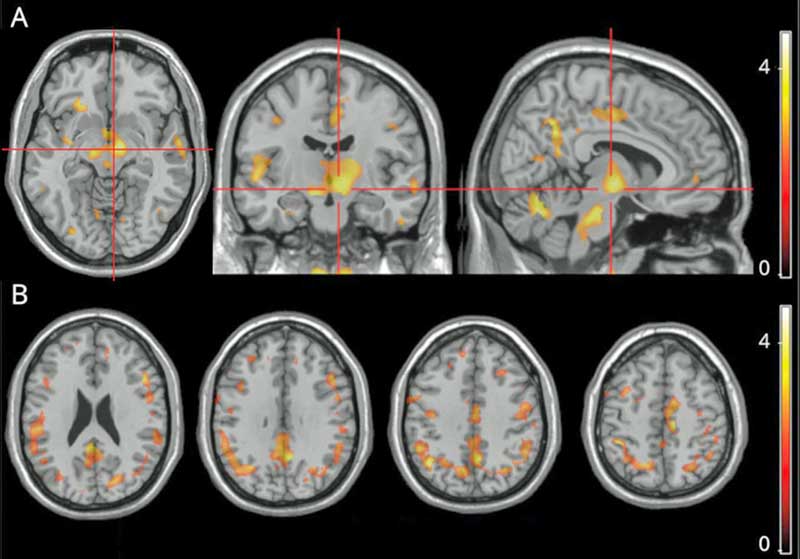 The main finding was a “strong correlation” between the amount of fatigue the MS patients were experiencing and the activation of microglial cells in a part of the brain called the substantia nigra. Secondary analyses found microglial activation in other parts of the brain (right precuneus, parahippocampal gyrus, putamen, thalamus, juxtacortical white matter) were also associated with increased fatigue.

The fatigue in MS isn’t totally mysterious – we just know that it isn’t associated with the amount of nerve damage present. Other studies have suggested that microstructural changes and abnormalities in various connections, networks and structures play a role, and several hypotheses (dopamine, neuroendocrine and functional disconnection) have been formed.

The cause behind these abnormalities has never been identified, but these authors proposed that the microglial activation they found could be the “unifying mechanism” driving the structural and other changes.

More pertinently for our case, though, they also suggested that the microglial activation might simply be causing fatigue in general – and jumped right into chronic fatigue syndrome (ME/CFS).

First they cited the 2014 Nakatomi ME/CFS neuroinflammation study. Then came Chaudhuri and Behan’s mammoth 2004 paper, “Fatigue in Neurological Disorders“, which proposed basal ganglia dysfunction was causing the fatigue in ME/CFS, and then came Komaroff’s 2019 JAMA paper, “Advances in Understanding the Pathophysiology of Chronic Fatigue Syndrome“,  one of the top visited papers from JAMA of 2019. They even cited a 1998 paper which compared post-polio syndrome to ME/CFS.

Findings suggesting that the activity of the default mode network was altered in more fatigued MS patients provided another potential connection between ME/CFS and fibromyalgia. One study in ME/CFS and many in FM have produced similar findings.

Miller, a psychoneuroimmunologist, came to his basal ganglia work in ME/CFS via a fascinating route. It turns out that giving an immune factor called interferon-alpha to hepatitis C patients knocks down their infection, but also produces an ME/CFS-like state (fatigue, fever, and other flu-like symptoms) in a large subset of patients. 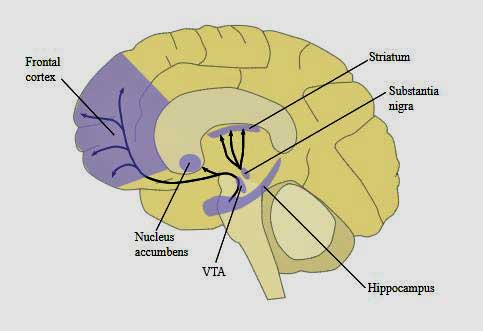 Notice the concentration of dopamine in the midbrain (basal ganglia and hippocampus) and the prefrontal cortex. The Japanese believe dopamine reductions in these areas are producing fatigue in ME/CFS

It was the ability of interferon-alpha (IFN-a) – which is naturally produced by the body – to do this which clued researchers into the phenomena of “sickness behavior”; i.e. the deliberate production of symptoms to keep people with infections immobilized.

After studies suggested that this “sickness behavior” is being produced by the basal ganglia in hepatitis C, Miller used a functional MRI (fMRI) to measure the basal ganglia’s response to “reward” in ME/CFS patients and healthy controls.

Miller used “reward” because hepatitis C studies have shown that “reward” is strongly associated with fatigue, our mood and, interestingly, how well we move and react. In that vein, it’s interesting that ‘psychomotor’ slowing – one of the most consistent findings in ME/CFS – is also commonly found in people with basal ganglia dysfunction – and is also highly associated with fatigue severity.

That reduced input, Miller thought, was probably indicative of an under-functioning dopamine system. In fact, Miller suggested that problems with reduced dopamine functioning might be found across the brain in ME/CFS.

Dopamine plays a pivotal role in the regulation of mood, motivation, reward, motor activity (movement), and sleep-wake cycles. Low levels of dopamine can result in high levels of effort being needed for even simple tasks.

Miller proposed that low dopamine levels may also have an insidious effect that leaves the central nervous system vulnerable or sensitive to inflammation; i.e. that suggests low levels of inflammation – perhaps the kind found in ME/CFS and FM – could cause high levels of fatigue, motor slowness, cognitive problems, etc. Studies suggest that when given IFN-a for hepatitis C, it’s the dopamine-deprived individuals suffer who suffer from enormous fatigue, motor slowing, and depression. Dopamine deprivation, then, could possibly set the stage for an ME/CFS-like reaction to an infection.

Since Miller’s 2014 paper, the connection between damage to the basal ganglia and ME/CFS-like symptoms has only strengthened in hepatitis C, ME/CFS and allied diseases.

Wylie’s 2019 study implicated the basal ganglia in fatigue in Gulf War Illness (GWI). While a 2018 review of fatigue and the nervous system couldn’t come up with a definitive region of the brain, the basal ganglia and the limbic system were two of the four brain areas highlighted. Plus, reduced basal ganglia functioning was associated with increased physical fatigue in older adults.

Other researchers are hovering around this area. Japanese researchers have proposed that an inhibited circuit involving the prefrontal cortex, the basal ganglia and other structures stops signals going to the motor cortex to increase muscle performance.

Barnden’s fascinating study suggested that microglial activation in the midbrain and prefrontal cortex teams up to produce the autonomic nervous system and sleep problems in ME/CFS.

Dopamine, the Basal Ganglia and Fibromyalgia

Several studies implicate reduced dopamine in fibromyalgia as well, and one fMRI study also found the same reduced levels of reward found in ME/CFS and IFN-a patients. Connections to pain have cropped up. One hypothesis proposed that reduced brain reward circuit functioning plays an important role in determining our levels of pain sensitivity.

Fatigue is one of the most common and disabling symptoms of MS, yet it is not, oddly enough, related to the lesions which cause the movement and other problems in the disease. Some studies have found brain abnormalities that are associated with fatigue in MS, but it’s never been clear what’s causing them. A small exploratory MS study may have provided an answer – microglial activation and neuroinflammation.

As in ME/CFS and FM, widespread areas of neuroinflammation in the brain were found in MS. It was the key finding of the study, however, that aroused the most interest. The part of the brain most associated with the fatigue in MS was the substantia nigra of the basal ganglia. Damage to the basal ganglia has long been proposed to play a crucial role in the fatigue in ME/CFS and other diseases, and the authors readily cited past findings in ME/CFS.

They didn’t cite, though, the 2014 Miller paper which found that increased mental and physical fatigue and reduced activity was correlated with reduced basal ganglia activation in ME/CFS. Since Miller’s study, several others have implicated the basal ganglia findings in ME/CFS and FM.  Other researchers are focused in on the prefrontal cortex/basal ganglia/hypothalamus connection. There’s more “there there” in this area all the time.

These studies suggest that microglial activation could be contributing to reduced basal ganglia activation and fatigue not just in ME/CFS and FM, but in MS and other diseases.

Some researchers – including these MS researchers – believe that microglial activation lights the fire that produces central nervous system diseases like MS, as well as other diseases like Parkinson’s disease, ME/CFS, FM and GWI. The type of disease that is produced depends on the where and how of the neuroinflammation and the environment; i.e. the biological construct of the individual involved.

Given that it was good to see the authors emphasize that future research studies search for “common…mechanisms of fatigue” in neurological disorders such as MS, ME/CFS and Parkinson’s disease.

“Future research studies are needed to compare the fatigue-related microglial changes in MS with other diseases such as CFS and Parkinson disease and identify common and disease-specific mechanisms of fatigue in neurologic disorders.” The authors.