As time has gone on, the energy production issue in chronic fatigue syndrome (ME/CFS) has become better and better documented as researchers take different slants on it. 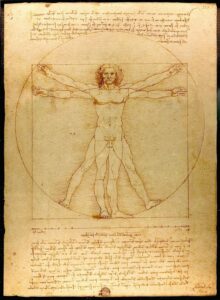 Take the whole body energy production tests. Workwell’s two day cardiopulmonary exercise tests (CPETs) have documented the damaging effects that exercise one day has on ME/CFS patients’ ability to produce energy the next day. Harvard pulmonologist David Systrom’s invasive CPETS have located multiple areas of deficiency (poor oxygen uptake, microcirculatory problems, reduced preload) in energy production. From Katarina Lien in Norway, to Betsy Keller in the U.S., to Vermeulen and Visser in the Netherlands, many studies suggest that fundamental problems producing energy exist. (We await the results of one of the most intriguing studies: Avindra Nath’s CPET/metabolic chamber study.)

Then there’s the whole body metabolism slant. Metabolic profiling using metabolomics has provided another way to demonstrate that something in the energy production process has gone awry.

Cara Tomas, Julia Newton and the Newcastle group have been on a roll lately – pumping out 5 papers over the past two years. In this study, “Substrate utilisation of cultured skeletal muscle cells in patients with CFS“, Cara Tomas and colleagues dug muscle cells out of patients and then ran them through the Seahorse machine.

The Newcastle group has done this kind of analysis before on immune cells called PBMCs (peripheral blood mononuclear cell). That study found that put under stress, the immune cells were unable to produce as much energy as cells from healthy controls.

In 2015, Newton found that when stimulated, muscle cells from ME/CFS patients demonstrated impaired activation of AMPK – the protein kinase which stimulates the cells to uptake the glucose and fatty acids it needs to produce energy. Impaired stimulation of glucose uptake was found as well. The cells, then, were not getting the substrates they needed to produce energy.

The next study, though, suggested that AMPK wasn’t likely the problem – the problem was something upstream of it. This time, the group took perhaps the most energetically challenged of all cells – the muscle cells – and tweaked them in different ways while putting them through their paces in the Seahorse.

The question they attempted to answer was where the blockade in energy production occurred, and if the energy production problems they found in the immune cells extend to the muscles; i.e. are they likely body-wide?

Like many of these studies, this was a small study – just 20 people – and thus the results must be considered preliminary. 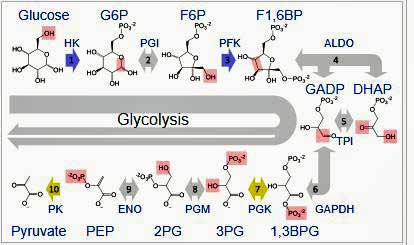 The Seahorse is able to test both parts of our energy production cycle independently. The study suggested that the muscle cells of ME/CFS patients have problems utilizing glucose, but glycolysis was working fine; i.e. when the glycolytic cycle was given glucose, it was able to convert it into pyruvate at a good rate..

Tests of the mitochondrial respiration (cycle citric acid, TCA or the Krebs cycle – all refer to the same process) using galactose and fatty acids) suggested that it was able to punch out ATP at a good rate: it was working fine.

If glycolysis and the TCA cycle are working fine, then where was the problem?

Fluge found evidence of increased PD kinase activity – which could be stopping PDH from metabolizing pyruvate to acetyl-CoA.

The possibility of a defect in the pyruvate dehydrogenase complex (PDH) brings us back to Fluge’s mammoth 2016 study, “Metabolic profiling indicates impaired pyruvate dehydrogenase function in myalgic encephalopathy/chronic fatigue syndrome“. That study, coming from an entirely different angle, pinned the blame on the PDH complex as well. Fluge’s 300-person metabolomics study found that reductions in amino acids that fuel the TCA cycle suggested that the PDH enzyme was not converting pyruvate to Acetyl CoA.

This problem, interestingly enough – given the results of last year’s study suggesting that too much lactate is being produced during exercise in ME/CFS – would result in an accumulation of pyruvate and an overproduction of lactate. (Lactate is produced from pyruvate.)

A reduced breakdown of pyruvate – which ultimately comes from glucose – results in the increased usage of ketogenic amino acids (fats, amino acids) in the TCA cycle. (That could explain why ketogenic type diets are helpful for some people). Fluge also found increases in the expression of pyruvate dehydrogenase kinases and the SIRT4 enzyme – both of which shut down PDH.

PDK, interestingly, ramps up its activity during times of starvation in order to limit energy usage. It’s intriguing how many different time concepts like ‘starvation, hibernation and hypometabolism” have been used in ME/CFS.

Lastly, the authors asserted that the study results indicate that the problems with the mitochondria are likely either genetic or epigenetic in nature.

Twenty years of research from ME Research UK!

If I read it right, this study, then, suggests two major problems are present: ME/CFS patients’ muscles cells are not utilizing glucose well, and there’s a problem converting pyruvate to Acetyl CoA.

We’ve heard about the problems with glucose before. Glucose – the quickest, most efficient energy source – is apparently being replaced, to some extent, by less efficient amino acids and fats as an energy substrate.

If pyruvate is not being properly metabolized to acteyl CoA, it will show up in the form of increased lactate levels – which a study by the Fluge group found last year.

Since the Newcastle group has found these problems in both the immune and muscle cells (and those cells are nothing like each other) this study suggests these energy production problems likely show up in many cells and is body-wide.

So, we have yet more evidence – albeit in a small study – of impaired energy production. While we can’t tie the results of all of the energy studies together yet and say, “this is the source” of them, it’s remarkable how many different ways it’s been shown.

On that note, a “new” possibility has recently popped up. It’s actually not a new possibility – in fact, it may be one of the first explanations to show up in the ME/CFS literature involving the mitochondria. In “Hypothesis: Chronic Fatigue Syndrome, Mitochondrial Hypo-function, and Hydrogen Sulfide”, in 2007 Marian Lemle proposed that altered levels of hydrogen sulfide (H2S) could be involved in the energy production problems in ME/CFS. Her thesis is now being investigated by Bindu Paul, a Johns Hopkins researcher. Marian pointed out back then that alterations in H2S can increase blood lactate concentration and altered lactate/pyruvate ratios – resulting in more anaerobic glycolysis. (A blog on H2S and ME/CFS is coming up.)

It’s great to have these creative researchers at work, but we should note that this work doesn’t come for free, or cheaply, and this mitochondrial work was entirely community-supported, in this case by ME Research UK, which is celebrating its 20th year of funding ME research. Let’s celebrate them and thank them for funding this intriguing study and all the others.