Something new has become possible with the long-COVID funding. Long sought answers to ME/CFS are not a pipe dream anymore but appear achievable. They will, however, take some time to emerge. Yet many people are suffering now, and some may not make it until those answers emerge. What a tragedy to endure so much and not make until the end. Supporting everyone in “making it” sparked the idea for Health Rising’s “Ending Suffering” project. 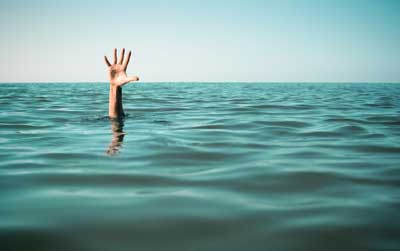 Studies indicate that ME/CFS and FM are uncommonly difficult diseases to have.

The Ending Suffering project is dedicated to exploring the rather astounding notion that suffering is optional.

The project will examine ways to reduce suffering and improve the levels of joy, well-being and satisfaction in people with chronic fatigue syndrome (ME/CFS), fibromyalgia (FM) and allied disorders.

The studies suggest that these are good diseases to test this “suffering is optional” notion on. If it works in them, it may work anywhere.

People with ME/CFS have been shown to be more functionally impaired than people with heart disease, heart failure, multiple sclerosis and other diseases. Health related quality of life (HRQOL) scores are similarly low. One study found the quality of life in ME/CFS to be “particularly and uniquely disrupted“.

Most people with FM report experiencing moderate to severe disability due to their illness, and high rates of social security disability are present. Rather remarkably, higher levels of psychological distress were found in fibromyalgia than in the dreaded chronic regional pain syndrome (CRPS).

The project also embraces the idea that the suffering in these diseases is largely brain-based and that much of it arises from issues with the central nervous system – most of which seem, but are perhaps not, out of our control.

The neurological basis of suffering has been known for quite some time, and practices that can reduce it have been validated. Back in 2009, Rick Hanson outlined the neurological basis of suffering in his widely lauded book, “Buddha’s Brain: The Practical Neuroscience of Happiness, Love, and Wisdom“. In the 2013 update of his 1990 book “Full Catastrophe Living” that started it all, Jon Kabat-Zinn reported that 1,500 scientific studies and papers in the medical literature examined ways to reduce suffering without drugs.

Over time, of course, the brain organs and pathways associated with suffering have become better and better elucidated. The question this project concerns itself with is whether it’s possible to impact those brain pathways and reduce suffering.

It calls for a little evolutionary history. Our brains did not just burst into the world. They were built, piece by piece, over eons of evolutionary time. First came the so-called reptilian brain (hindbrain) centered at the base of our skull. It’s an ancient, powerful, and rather simple regulator of the basic processes (breathing, blood pressure, swallowing) of the body.

Built on top of the hindbrain is the midbrain which regulates movement, processes sights and sounds and the sleep/wake state.

The topmost and largest part of the brain is the forebrain. Several parts of the forebrain (insula, prefrontal cortex, anterior cingulate cortex (ACC), amygdala, cerebellum, periaqueductal gray (PAG)) produce the emotional and mental aspects of pain.

At the very bottom of the forebrain sits the limbic system which used to be known as the “tween brain”. Made up of the amygdala, hippocampus, hypothalamus, nucleus accumbens, etc., the limbic system sits in the very middle of the brain.

A good deal of our emotional life (fear, reward, motivation) derives from this more primitive part of the forebrain.

Surviving In a Dangerous World 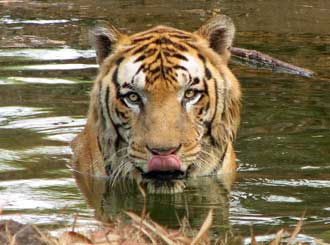 In the dangerous world we evolved in, hypervigilance was key.

The overriding need to survive in a dangerous world is the brain’s master theme. Our brains developed in a world where the smallest misstep – the snap of a twig that we didn’t hear, the slight movement in the shadow in the bush that we missed – could mean death.

“the brain is like Velcro for negative experiences and Teflon for positive ones”. 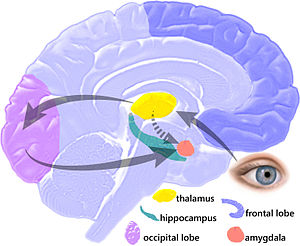 A chronically activated amygdala has the potential to produce a lot of suffering.

Given the number of negative experiences that people with FM and ME/CFS encounter, it’s no surprise that the amygdala – the primary fear organ in the brain – might be involved. Lying right at the heart of the “suffering response”, the amygdala, a small, almond-shaped organ in the center of the brain, is tasked with adding feelings of fear and unpleasantness to situations.

The amygdala also, interestingly, plays a major role in what we pay attention to, and is a powerful autonomic nervous system regulator.

When activated, the amygdala pings the hypothalamus, which then activates the sympathetic nervous system (SNS) or fight/flight system – a system we know is overly activated in fibromyalgia and chronic fatigue syndrome.

The first sentinel in the danger response, the amygdala has to be lickety-split fast. Once activated, it responds within milliseconds on a pre-conscious level. By the time your conscious registers that a car is coming towards you, your amygdala is already starting to move your body out of the way. The amygdala introduces an important theme that we’ll follow up on in future blogs – that much of what affects us comes from subconscious levels.

A damaged amygdala can be bad news in two ways. First, it can result in a barrage of “excitatory inputs” from the brainstem which send the amygdala into hyperdrive, causing it to slam the great regulator – the prefrontal cortex (PFC) – with danger signals. Too much of that and parts of the prefrontal cortex will fold – giving the limbic system free rein.

The Calming Center –  the Prefrontal Cortex

Sitting at another hub of the emotional response to pain, and playing a dominant role in how much suffering we experience, is the medial prefrontal cortex (mPFC) and the anterior cingulate cortex (ACC). 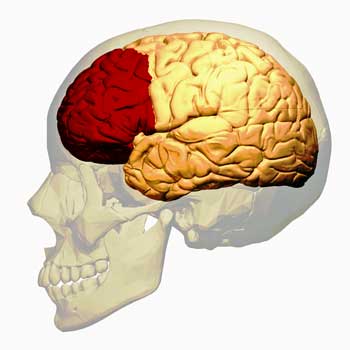 The prefrontal cortex (red) is tasked with calming the limbic system down. Some studies suggest it may not be operating so well in ME/CFS and FM.

The mPFC inhibits both the sensory and emotional signals generated in the limbic system from getting out of control by reining in the fear behaviors and the fight or flight response produced by the oh-so-twitchy amygdala. How much peace, joy and satisfaction we experience is in part determined by how well the mPFC is able to calm down the amygdala and associated organs.

Studies indicate that simply being in chronic pain impairs the mPFC’s ability to do that. In fact, a back pain study indicated that when acute pain transitions to chronic pain, pain signals get transmitted more and more through the emotional circuits of the brain such as the amygdala. The intensity of the pain signals may not change, but they produce more and more suffering.

Interestingly, transition to a more emotional state of chronic pain was predicted, not by a person’s psychology, but by the strength of the connection between a person’s prefrontal cortex and a brain organ – the nucleus accumbens – associated with the limbic system.

Being exhausted doesn’t help. In an attempt to simulate the exhaustion typically found in ME/CFS, a Japanese study had healthy people do cognitive tasks until exhaustion set in. fMRIs indicated that as the participants became more and more tired, their prefrontal and anterior cingulate cortices began to shut down. As that happened, their prefrontal cortex failed to activate their “rest and digest” or parasympathetic nervous system, and the activity of their “fight for flight” or sympathetic nervous system spiked.

The Japanese proposed prefrontal cortex damage is causing something similar to happen in ME/CFS. With the inhibitory brake of the prefrontal cortex gone, the sympathetic nervous systems of people with ME/CFS have become hyperactive producing, among other things, suffering.

Fifteen years ago, this group suggested “the prefrontal cortex might be an important element of the neural system that regulates sensations of fatigue.”

Several studies in ME/CFS, and more in fibromyalgia, suggest that the prefrontal cortex is indeed impaired.

Lower blood flows have been found in the anterior cingulate cortex – a part of the prefrontal cortex – found twice in ME/CFS.

The Way Out of Suffering?

There is potentially a way out of the suffering imposed by these dysregulated networks, and it involves using the highest and most recently evolved area of the brain – the prefrontal cortex – to tamp down the activity of the more primitive parts of the brain. 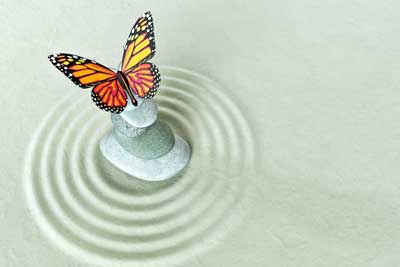 Studies indicate that it is possible to significantly reduce suffering – even in people with chronic illnesses.

The project’s goal is to reduce suffering of any kind – physical, emotional, mental – and find ways to introduce more joy, peace of mind and satisfaction back into our lives.

Exploring the many different techniques that have been used to do that is what the Ending Suffering project is all about. It will consist of Zoom interviews with patients and experts who’ve found ways to find peace and joy even in the midst of a chronic illness as well as book, research and treatment reviews.

Suggestions – something to read, someone to interview, subjects to address – as well as blog contributions (we already have our first :)) are welcome. Please let us know via Health Rising’s Contact page.

We’re also looking for short videos from people who’ve found ways to improve their quality of life and experience of joy and satisfaction.

The project’s genesis came from the idea that some people who could benefit from future findings aren’t going to make it, but it’s also a personal exploration for me. As the project proceeds, I hope to learn ways to turn down the suffering and open up new possibilities of joy and satisfaction in my life as well.

I don’t know if I will succeed. I do know that it’s worth a try.