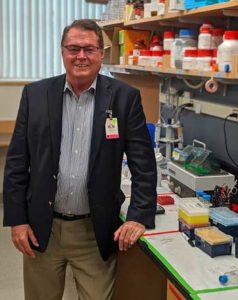 Ron Tompkins’ death was a blow.

I am devastated by his loss and will miss him greatly. Ron Davis

The news of Ron Tompkins’ death was like a punch to the gut. Not him, I thought! I was counting on him. Not only was Tompkins situated at Harvard, and in Boston – which has become something of a hotbed of chronic fatigue syndrome (ME/CFS) research – he also brought an almost unique profile to the ME/CFS research field. Tompkins, who, like Ron Davis, came to the ME/CFS field after a long and distinguished career, brought with him the kind of knowledge, experience, and connections that can only be developed over such a career.

Ron Davis noted that Tompkins’ unusual background – he was an MD with a doctorate, no less, in chemical engineering, meant that he was one of the few people (Robert Phair is another) to have deep roots both in the hard sciences and the medical field. Tompkins was fluent in both, and he and Davis interacted frequently.

I only met Tompkins a few times. In my experience, he exuded a kind of wellness and generosity that was unusual. He had a staggering resume: besides his 450+ publications, he was the founding Director of the Center for Surgery, Science & Bioengineering at Massachusetts General Hospital, the Chief of Staff Emeritus at Shriners Hospitals for Children―Boston; and the Sumner M. Redstone Professor of Surgery at Harvard Medical School. He also served as President and Board Member of more than a dozen national and international academic societies.

Tompkins led the 15 year-long Glue Grant project on traumatic injury and sepsis at the NIH. That project required Tompkins to coordinate the work of dozens of investigators across 22 academic institutions. It was the kind of project Ron Davis said Tompkins excelled at. Tompkins, he said, was adept at creating an environment that rewarded collaboration: he could pick out researchers who thrived in that kind of environment and was able to manage those who didn’t.

The Glue Grant project provided a surprising intro to ME/CFS. Tompkins had learned about ME/CFS during his long work with Ron Davis on the project. In the video below Tompkins noted that he and Davis came to the conclusion that many of the issues they dealt with involving poor recoveries from traumatic injury seemed to be replicated in ME/CFS. It turns out that an almost identical set of symptoms (fatigue, brain fog, sleep issues, dysautonomia) characterized both groups.

Getting a researcher of Ron Tompkins’ stature on board was like manna falling from heaven: it was both unexpected and very welcome. Tompkins immediately began recruiting colleagues right and left. When I talked with him in 2019, he’d just come from meeting with over a dozen MDs and specialists from Mass General Hospital who’d evinced a strong interest in ME/CFS.

it was astonishing to hear Tompkins very quickly bring up the idea of a Center of Excellence at Harvard. Tompkins’ vision of that Center seemed so palpable that one had the feeling that he could almost reach out and touch it. Tompkins didn’t just believe he already had the goods for a successful ME/CFS Center of Excellence at Harvard, he knew he did.

“The COE… would be extraordinarily well-supported by a very large group of extremely knowledgeable and committed clinicians and investigators.

“Complete implementation of a fully functional COE would be straightforward as there are dozens of clinicians and investigators who have been working independently for decades who would welcome the opportunity to work together as a very cohesive clinical and investigational internationally-recognized Center of Excellence.”

The interest was there: the only hurdle – one that would stymie him throughout his time at the Research Center – was funding. Tompkins was never able to get the funding he believed this disease deserved.

Even Tompkins with his impressive resume couldn’t break through the glass wall that’s been thwarting ME/CFS funding for decades. Tompkins, with his 450 research papers, was obviously a master at getting grants – for other diseases.

His failure to do the same with ME/CFS shocked and frustrated him. Concluding there was no pathway forward at the NIH, he turned to the military only to watch grant application after grant application suffer the same fate. It must have been a supremely frustrating experience for a researcher who’d operated so successfully for so long at the highest levels of medical research.

I would have loved to see Tompkins and Xiao compete for an NIH ME/CFS research grant. At the time of Tompkins’s death, though, the Harvard ME/CFS Collaborative Research Center, led by him and Wenzhong Xiao, was engaged in five studies, three of them featuring David Systrom. Most were focused on understanding a core issue in ME/CFS: why exercise hurts rather than helps people with ME/CFS.

Tompkins’ potential impact was blunted by his inability to get federal funding. As time went on, my guess is that the glass wall would have eventually shattered and the way would have been clear. Unfortunately, Tompkins wasn’t around long enough for that to happen, but he does leave behind important studies, a group of colleagues interested in working on ME/CFS, and a vision of what’s possible for the ME/CFS community at Harvard.

I don’t know how the Open Medicine Foundation hopes to fill the hole Tompkins’ death leaves behind. researchers like Tompkins don’t come along very often. Hopefully, they will find someone to build upon the work and the vision he left behind. We were lucky to have him while we did.

I am greatly saddened by the news that my friend and colleague Ron Tompkins died last night. For the past 21 years we have worked closely together on numerous academic and commercial projects. He was a gifted physician and a remarkable scientist. The fifteen years we worked on the Human Trauma Research Project were some of the most gratifying of my scientific career. Dr. Tompkins was in charge of the project, working with about 60 other physicians and scientists. I was in charge of the genomic aspects. He ran it with great skill, to my great admiration.

He empowered people to be engaged in the project doing what they do best. The participants came from all over the country, and we met in the Chicago O’Hare airport every 3 months to present the newest research findings, problem solve, and discuss ideas for how to proceed. It was remarkable that almost no one ever missed one of these meetings over its ten years of operation.

This was a complex project involving diverse specializations, but Dr. Tompkins ran it without conflict. Everyone knew that this was special and important – likely to produce significant breakthroughs. And it did. We discovered that, within a few hours of the trauma, we could predict the patients who would do well and begin to recover in a few days vs those who would linger, some never to recover. And surprisingly, it was not correlated with the extent of injury.

Before this project, trauma experts relied on mice models for their understanding of the effects of trauma. We were able to show, using our molecular approaches, that the response to trauma of mice was extremely different from the response of humans. (The correlation of gene expression during recovery from trauma between Mouse and Human is .06) We continued to analyze the data years after the project ended. Our work together developed into a very great and trusting friendship.

Towards the end of the Trauma project, my son became ill with ME/CFS and I knew I had to do everything I could to crack the disease at the molecular level and figure out how to help him and the many other suffering patients. I immediately began recruiting my most brilliant, creative, and scientifically rigorous colleagues and friends to help.

Ron was one of my first recruits. He was knowledgeable about a huge variety of topics, from chemical engineering to medicine to big data analysis to biochemical pathways. He immediately recognized the similarities between trauma and ME/CFS and enthusiastically joined me.

He was very strong on innovation and felt we should focus on being innovative, but it was difficult to find funding for innovation. He strongly supported the innovative work that I was doing in my lab. He knew it would be a difficult challenge. Since then, we have worked together closely, planned and attended meetings, shared our findings, ideas, and plans frequently by phone, and collaborated at every level. Ron has been truly incredible at recruiting scientists and doctors from the US and Europe to join our efforts. He embraced intelligence and inquiry, but was quite intolerant of arrogance and people who talked without expertise. He was one of my first recruits to the Open Medicine Foundation’s Scientific Advisory Board.

He and Wenzhong Ziao set up the ME/CFS Collaborative Research Center at Harvard, funded by OMF, and delved into many aspects of the disease. Ron was my greatest source of information on how things in the body at the molecular level might translate into medical reality in patients and we spent hours and hours speculating about different treatments and how they might impact the body from a medical perspective.

There is so much potential in what Ron created, and it has only been limited by his inability to get government funding, which greatly frustrated and angered him. He often said that the biggest problem is not the complexity of the disease, but to get some government agency to take it seriously and adequately fund it. He and I both knew that it would take a big team and serious funding to solve this devastating, complex, and ubiquitous disease.

Ron was such a lovely, engaging man. The patients loved talking with him at our Community Symposia at Stanford and vied for a seat at his table. He really enjoyed a great dinner with good wine, and conversation with laughs, and we loved having him over for dinner. My wife always cooked him salmon because he claimed it was the best he’d ever eaten in all his travels. He called her “The Salmon Lady”.

Ron’s diversity and depth of expertise, his lively and enquiring mind, his inclusive and compassionate attitude, and his love of great food and a great discussion are unmatched. I am devastated by his loss and will miss him greatly.