Is the National Institutes of Health (NIH) Going to Miss Out on Long COVID?

Did the NIH spend a year getting ready to study long COVID only to miss its last, best chance at doing so?

It seems like an incredible thing to ask but one must now ask if the National Institutes of Health (NIH) is going to miss, yes miss, its best opportunity to study long COVID. There’s a lot riding on the NIH getting this right. For one the amount of money, the NIH has available to study long COVID simply dwarfs other efforts. Its studies will be immensely bigger, better funded, and better organized than any others. Plus, long COVID is just one of many diseases (chronic fatigue syndrome (ME/CFS), fibromyalgia, postural orthostatic tachycardia syndrome, autoimmune diseases) that stand to benefit from this unique opportunity.

Moving at what Director Francis Collins said was lightning speed (for them), the NIH approved awards to build the massive infrastructure needed for the RECOVER (Researching COVID to Enhance Recovery) initiative by June 2021. The main protocols were created by July, and then in Sept., the NIH announced it had provided over $470 million in grants to more than 100 researchers at 30 institutions

So far, so good. The NIH very quickly (for them) put together what appears to be an impressive effort that emphasized similar protocols, patient registries, data collection sites, and biobanks.

In Sept. 2021, Dr. Stuart Katz, a leader of the RECOVER initiative, reported that the effort would in what he called “an unprecedented scale and pace of enrollment” enroll tens of thousands of participants over the next 12 months. With the initiative containing enrollment sites in all 50 states, though, Katz clearly believed it feasible. In an apparent burst of enthusiasm, one NIH rep even stated the NIH hoped to launch treatment trials in the next year to a year and a half. In Nov 2021, Dr. Katz reported that the first phase of adult enrollment had started in October and the next phase would begin in December.

A recent study underlined how complex the situation is. It found that the seeds of long COVID began early in the initial infection. It was able to trace long COVID six months later back to its roots using the data from the original infection. It couldn’t do the opposite, though. Six months after the infection had occurred, everything had become so jumbled there was no telling how everything got started.

It was imperative, then, that at the very least, the NIH got as many samples as possible from people with COVID-19. It didn’t need to do anything with those samples. It didn’t even need to have created the protocols to test them. It simply needed to have large numbers of samples that it could later test.

While the coronavirus – with its big Delta wave and even bigger Omicron wave – was certainly cooperating, it was not as if the virus was going to hang around forever. The NIH, it seemed, though, had lucked out. The fast-moving, highly contagious Omicron variant gave the slow-moving NIH a lifeline to fill its huge cohort of patients, gather their samples, and start following them. 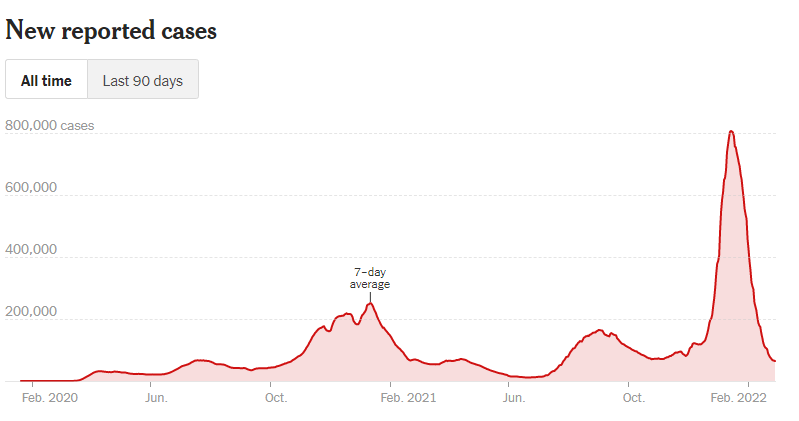 As the Omicron variant quickly fades the RECOVER Long COVID program has only a fraction of the participants it needs. (From the New York Times)

Except the NIH appears to have mostly missed the Omicron wave. With that wave quickly fading away, the NIH last week announced that it had enrolled a grand total of 670 people of its projected 17,680 people long-COVID cohort. Six months after Katz stated he’d hoped the RECOVER initiative would enroll tens of thousands of participants in the first year, it had enrolled less than 700. (We don’t know how many long-COVID patients, healthy controls, or COVID-19 patients are in that group).

Unless the NIH has been banking a lot of samples somewhere – or has access to a lot of samples – which is a possibility – it appears to have missed its best and probably last chance to catch long COVID in the act. It will still be able to intensively study people who have already come down with long COVID but it appears it’s mostly missed or at least blunted its opportunity to get at the early stages of the infection.

There’s no doubt that ramping up a $500 million program of grants for a new disease entity is not a piece of cake, but being able to catch only the tail end of long COVID is surely not what Congress had in mind when it gave the NIH $1.15 billion to study long COVID.

Other less critical things are lagging behind as well. Six months after it awarded almost $500 million in grants, the RECOVER Initiative still has not published what those grants are. After listing the University research sites a couple of months ago, it’s taken them off the website. Six months after Katz talked about enrollment sites across 50 states, none have been listed. The only way to find out about enrolling in a long-COVID study that I can find is to leave your email address and zip code. It’s a big mess