It was a small study, but small studies done in the right hands and pursued vigorously enough can make a real difference. Plus, there’s nothing like really digging into the brain – and this took actual digging – to learn what the SARS-CoV-2 virus is doing to this most obscure and difficult-to-access organ.

Nath’s findings suggested to him that leaky blood vessels may be sparking inflammation in the brains of long-COVID patients.

In a sense, the senior author of this study, Avindra Nath, has been here before. A year and a half ago, in Feb. 2021, Nath produced one of the first – and still the most interesting – brain findings in COVID. The “Microvascular Injury in the Brains of Patients with Covid-19” study highlighted a theme – small blood vessel damage – that has only grown over time. Nath’s early study found widespread punctate hyperintensities – similar to what was found in ME/CFS decades ago – and small blood vessel damage and leakage across the brain.

Proteins such as fibrinogen, C1q, IgG, and IgM – which should only be found in the blood – had leaked into the brain – triggering, no doubt, an immune reaction. The study findings suggested that damage to the blood-brain barrier that protects the brain had occurred.

A recent survey of the long-COVID literature found no less than 15 studies addressing blood vessel and blood clotting issues in COVID. None of them have addressed blood vessel problems in the brain, however.

In “Neurovascular injury with complement activation and inflammation in COVID-19“, Nath was back with a more detailed autopsy study that tells us much more about what this virus can do. The virus really displayed its potentially lethal character in this study: all the participants in this study died quite quickly after getting infected and, while they did experience respiratory symptoms, the virus did its deadly work in their brains. While the participants in the study died, Nath has, in interviews, stated that he believes their findings may well inform what’s happening with long COVID.

The study dug deep into the endothelial cells lining the blood vessels. Immune complexes produced by antibodies found on the endothelial cells indicated that an immune attack had occurred. IgG and IgM antibodies and platelet aggregates (i.e. small blood clots) were associated with proteins (C1q, C4d, and C5b-9) produced by the classical pathway of the complement branch of the immune system. Activation of the classical pathway occurs in many autoimmune and inflammatory disorders.

Staining shows high levels of different complement proteins in the COVID-19 patients (below) vs the controls (above).

Increased levels of an adhesion receptor on the surfaces of those cells suggested the damaged cells were attracting activated platelets to them. They produced a clotting cascade that damaged the endothelial cells, causing them to leak. (Gene expression data indicated that a coagulation cascade had begun and that a clotting event had occurred.) Increased levels of the von Willebrand factor, which is associated with damage to the endothelial cells lining the blood vessels, further cemented the fact that blood vessel damage had occurred.

The all-important antigen – the molecule found on the endothelial cells – which had prompted the immune system to attack them remains unknown, but the authors suggested it could either come from the spike protein of the coronavirus or to the ACE-2 receptor the virus uses to penetrate the cells. Given the abnormal ACE-2 findings in chronic fatigue syndrome (ME/CFS), the latter would probably be more useful for people with ME/CFS.

An inflammatory response primarily involving the macrophages in the spaces surrounding the blood vessels reflected an attempt to repair the damage produced by the leaky blood vessels. With that, you have an ongoing inflammatory process taking place in the brain.

Widespread neuron loss and damage in the brainstem area, in particular, were found. While the study did not find evidence of infection there, they noted that “Involvement of the brainstem could have dire consequences since many vital functions are controlled by this region.” and that “five patients in our study died suddenly, most while sleeping”. The brainstem, of course, is of major interest in ME/CFS. 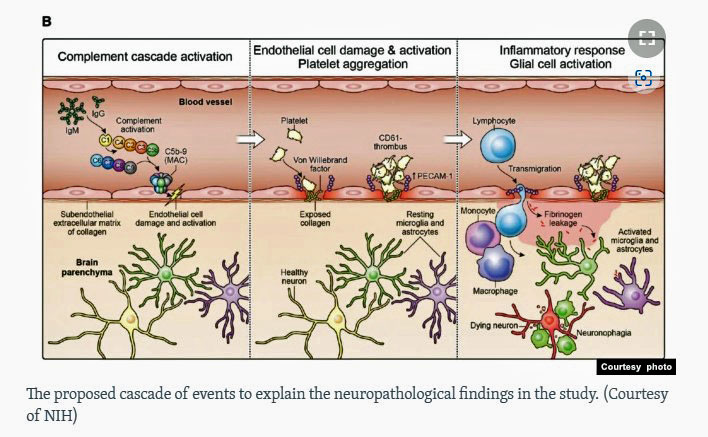 The authors proposed the following happened: The virus triggers – in a way they don’t know yet – the complement pathway to form immune antibody complexes that target and activate the endothelial cells. The activated endothelial cells then express pro-inflammatory and clotting factors which caused clots to form. The damaged endothelial cells allowed proteins to leak out into the spaces surrounding the blood vessels.

The unwanted proteins then attract monocytes – which turn into macrophages – which then engulf the proteins in an attempt to clean up the area. Some proteins, though, made their way to the immune cells in the brain – the glial cells – as well as to the neurons they surround and support. Sensing an invader, the glial cells pounce on the proteins, but in doing so, damage the neurons – causing the macrophages to clean them up as well.

The patches of leaky brain blood vessels scattered across the brain, but apparently focused more in the hindbrain area where the brainstem resides produce an ongoing inflammatory response in the brain and nerve damage. The symptoms each person experiences depends on which part of the brain the blood vessel leakage occurs.

The participants in this study had died, but the lack of lung involvement and the massive hit their brains took cried out long COVID to Nath. If these patients had survived, Nath felt they probably would have become long-COVID patients, stating “It is quite possible that this same immune response persists in long COVID patients, resulting in neuronal injury.”

Noting that immune-modulating therapies might help turn off the immune activation that may be causing so much trouble, Nath stated, “these findings have very important therapeutic implications.” Nath has begun a 40-person long-COVID IVIG/corticosteroid study.

This model is all the more interesting because it appears to fit what some past ME/CFS studies have found. Baraniuk’s 2005 cerebrospinal proteome study found evidence of amyloid (misfolded protein) deposition in the blood vessels and a weakening of the blood vessel walls in the brain. Baraniuk speculated that localized bleeding caused by amyloid deposition into the blood vessels might be occurring throughout ME/CFS patients’ brains.