The Prusty Files: HHV-6 Found in the Brains of ME/CFS Patients 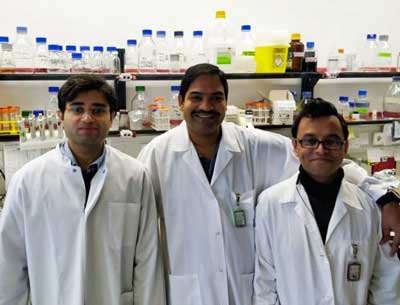 Bhupesh Prusty’s goal seems to be to upend what we know about the herpesviruses, in particular, human herpesvirus-6 (HHV-6), and their relationship to chronic fatigue syndrome (ME/CFS).

His Twitter handle calls him “a passionate molecular virologist who believes in patient-oriented scientific research… Science is for society.” Thus far, Prusty has been the recipient of a Ramsay Award from the Solve ME/CFS Initiative and a Young Investigators award from the HHV-6 Foundation, and appears to have put both of them to good use.

HHV-6 has been like Epstein-Barr virus’s poor sister in the chronic fatigue syndrome (ME/CFS) world. It’s always been in the mix, but EBV has received the lion’s share of attention. HHV-6 has had something of a renaissance in ME/CFS lately, with several recent studies suggesting that it may play a big role in at least some patients.

A Latvian/Israeli team found that the more severely ill a person is, the more apt they were to have high HHV-6 loads and evidence of an active infection. Similarly, a 2021 study found HHV-6B/HHV-7 viral loads were correlated with symptom severity, cognitive issues, and autonomic nervous system problems in a subset of people with ME/CFS. Earlier this year, a study documented the existence of unusual HHV-6 enzymes called dUTPases in ME/CFS.

A 2022 meta-analysis of 17 ME/CFS HHV-6 studies concluded – without stating that HHV-6 was causing ME/CFS – that an “association between the HHV-6 infection and CFS” was substantiated.

HHV-6, like EBV and other herpesviruses, establishes a latent infection in the body – remaining present thereafter. The big question is whether it’s doing more than hanging around in ME/CFS and other diseases. Now that there is strong evidence that EBV is the causal factor in multiple sclerosis, it’s perhaps time to wonder what it’s sister virus – HHV-6 – is doing. Like EBV, HHV-6 prefers to target neurons in the central nervous system and has been associated with several central nervous system diseases.

Prusty and Naviaux found that HHV-6 infection and serum from people with ME/CFS fragmented the mitochondria.

In one of the great leaps in research that I can remember, Prusty and Bob Naviaux pulled the HHV-6  and ME/CFS world in a new direction in 2020 when they showed that not only did HHV-6 appear to fragment the mitochondria but that it reduced the availability of the raw materials needed for the mitochondria to work properly.

That was just the warmup. Next, they showed that simply adding serum from people with ME/CFS into a cell culture produced the same strange state of mitochondrial discombobulation. They concluded that:

Prusty and his German colleagues were back in May of this year with a Nature publication, no less, “Selective inhibition of miRNA processing by a herpesvirus-encoded miRNA“, that cast a new light on how HHV-6 maintains itself in the body and does damage. HHV-6, it appears, produces microRNAs (miRNA) that trigger a “profound disruption of mitochondrial architecture.”

That, in turn, interferes with the production of the powerful antiviral interferon cytokines, thus allowing the virus to spread in the body and/or become reactivated.

They were also able to identify the miRNA (miR-aU14) that triggered the virus to waken up from latency and become reactivated. Even more encouragingly, they called the miRNA responsible for waking up the virus “readily druggable”, indicating that drugs could be developed to stop it. They concluded:

For his next trick, Prusty and colleagues from the HHV-6 Foundation, the Ohio State University herpesvirus research team (Maria Ariza) and others, took the HHV-6 conversation in ME/CFS to an entirely different level.

In “Tissue specific signature of HHV-6 infection in ME/CFS“, they looked for evidence of the HHV-6 miRNA (miR-aU14) and HHV-6 proteins in brain samples from autopsies of people with ME/CFS (n=3), people with other diagnoses (n=3; anorexia, non-Hodgkin’s lymphoma, and breast cancer) as well as 21 other controls without ME/CFS.

They also assessed the prevalence of the following antibodies: anti-HHV-6B U94, anti-HHV-6B OHV3, anti-HHV-6 gB, anti-HHV-6 p41 and anti-EBV dUTPase. EBV dUTPase is an enzyme produced by smoldering infections of Epstein-Barr virus and has been a focus of study in ME/CFS. Finding antibodies in the brain would indicate that an immune attack had taken place – either against the virus or a part of the brain the immune system had mistaken for the virus.

HHV-6 proteins (indicating the virus was present), miR-aU14 (the mitochondrial fragmentor was present), and/or antigens were found in 2 of the three ME/CFS patients across the brain in the choriod plexus, hippocampus, amygdala, dorsal root ganglia, and/or cervical, lumbar and sacral nerve roots. EBV dUTPase (smoldering EBV infection) was found in the brains of all three ME/CFS patients but not in any healthy controls.

The fact that an HHV-6 protein was found in the cerebellum of some of the healthy controls suggested that HHV-6 can exist in its latent state in the brain without causing problems.

The many more signs of HHV-6 and EBV found spread across the brains of the 3 ME/CFS patients suggested that something of a different nature was going on. Dramatic mages posted to Twitter by Prusty show how abundant some of the signs were.

The red spots are signs of HHV-6 infection.

A Z-stack video showing presence of HHV-6 miRNA (miR-aU14) within Lumbosacral nerve root of one of the ME/CFS patient. pic.twitter.com/UMuaORBd3t

They were also found in quite interesting places. The choroid plexus secretes cerebral spinal fluid (CSF), and intracranial hypertension (elevated CSF pressures) appears to be a real thing in ME/CFS. The hippocampus and amygdala are part of the limbic system and play a role in memory and fear/hypervigilance. The dorsal root ganglia process the sensory signals entering the spinal cord and have been the subject of great interest in fibromyalgia. All of them appear to make sense with what we know of ME/CFS.

While we don’t know these patients died of HHV-6, it’s clear from other diseases that active HHV-6 in the brain is not anything that anyone would ever aspire to. HHV-6 has been found in the brains of people with a variety of neurological diseases, and the authors pointed out that active HHV-6 in the brain – and the inflammation it causes – has been linked to several of them, including mesial temporal lobe epilepsy (MTLE), multiple sclerosis (MS), and Alzheimer’s disease (AD).

Given HHV-6’s predilection for settling in nerves, and its ability to foment inflammation when active, an active central nervous system infection would fit in nicely with hypotheses proposing that neuroinflammation plays a major role in ME/CFS.

The authors also referred to a string of papers by Matsui et al. which proposed that people with ME/CFS had a novel syndrome they called “cervical neuro-muscular syndrome” that Health Rising will dig into later.

EBV dUTPase also showed up big time in this study. EBV dUTPase is an enzyme produced by EBV when it’s present in a strange kind of broken, smoldering state. EBV dUTPase studies over the past decade in ME/CFS have shown that the enzyme is able to provoke an inflammatory response that could produce neuroinflammation. This is the first time, though, that the enzyme has been found in the brains of ME/CFS patients.

All in all, the herpesvirus studies continue to suggest that active herpesvirus infections could play a major role in at least some people with ME/CFS. Prusty’s study highlights the strong need for more autopsy samples and biobanks able to receive them.

On that point, Prusty’s aren’t the only autopsy results that have shown up in ME/CFS, though. A series of case reports have looked for evidence of damage in the brain in mostly young women who died of ME/CFS.

Death in Chronic Fatigue Syndrome (ME/CFS) – What has it Told Us? The Autopsy Files

Besides damage to the frontal cortex and basal ganglia, one young woman showed evidence of microvascular damage, and strange tangles of proteins, including amyloid plaques, were found.

“Substantial” amounts of C. burnetii DNA were found in Alison’s Hunter’s heart, lungs, spleen and liver. The authors concluded that the likeliest explanation for her decline and eventual death was a severe Q fever attack that infected her organs, causing brain and heart dysfunction; i.e. she had a post-infective fatigue syndrome.

A Focus on the Dorsal Root Ganglia

With dorsal root ganglia problems showing up in five out of seven earlier autopsy reports, and two of the three ME/CFS patients in the Prusty paper, the dorsal good ganglion appears to be a hot spot for people with ME/CFS.

Dorsal root ganglionitis (DRG) refers to a disease of the dorsal ganglia. These are nodules found just outside the spinal cord and contain the cell bodies of sensory neurons. Because they rely on sensory signals to the brain and play a key role in pain perception, problems with the DRG could conceivably produce many of the sensory and pain problems in ME/CFS and fibromyalgia.

Despite the different techniques that were used in the various autopsy studies, a clear pattern of dorsal root ganglionitis was found. These studies obviously present an opportunity to learn much, but we lack larger-scale, organized autopsy studies that would enable us to draw firmer conclusions.

What we do know is that every autopsy study has found evidence of damage and/or pathogen persistence either in the brain or elsewhere in the body. Hopefully, Prusty’s new findings will help support the emergence of biobanks that can support these kinds of studies.

With interest in the herpesviruses picking up – and findings suggesting that HHV-6 may be knocking off the mitochondria in ME/CFS – it’ll be interesting to see what the future will bring.

Thanks to the over 260 people who have supported Health Rising thus far in its end-of-the-year donation drive.

We try to make sense of all of it. If that appeals to you, please support us.

Bhupesh Prusty is one of the people Health Rising is committed to following, which is why we covered not just his most recent finding but his other ME/CFS findings in this blog. Health Rising was also the first – and is still perhaps the only website – to bring the ME/CFS autopsy reports together to look for a pattern. In this blog, we added Prusty’s new findings to the list – and, lo and behold, a pattern showed up. If you appreciate that commitment to completeness, please support us.