Vagus Nerve Stimulation in ME/CFS, FM, POTS and Long COVID – Is its Promise Being Fulfilled? 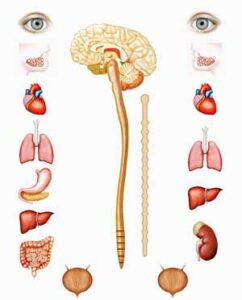 By all accounts, vagus nerve activity in ME/CFS, POTS, FM, and long COVID is low. It affects many systems across the body.

If any treatment has promise, vagus nerve stimulation (VNS) does. Through its stimulation of the rest/digest system (the parasympathetic nervous system (PNS)), VNS has the potential to tamp down the fight/flight system that seems to be raging in chronic fatigue syndrome (ME/CFS), fibromyalgia, postural orthostatic tachycardia syndrome (POTS), and quite a few other diseases.

Speaking personally, there are not many modes I’d like to more consistently get into than rest/digest mode.  An amped-up flight/fight system and a tamped-down rest/digest system could be affecting everything from blood flows and coagulation to the immune system, to the gut, and sleep.

Take just one major concern – sleep. Numerous studies have found reduced parasympathetic nervous system activity (rest/digest) during sleep. Even the CDC – which was not, back then, exactly known for validating findings – found autonomic hypervigilance (increased HR, reduced HRV, higher norepinephrine, as well as lower aldosterone levels) during sleep in ME/CFS.

“the presence of increased HR and reduced HRV in CFS during sleep coupled with higher norepinephrine levels and lower plasma aldosterone suggest a state of sympathetic ANS predominance and neuroendocrine alterations.”

That was back in 2007! Since then not only have the Aussies (and others) documented those findings but the Aussies have been unable to find anything else that could explain the poor, unrefreshing sleep in ME/CFS.

The 2018 Finnish study, and the 2010, 2011, and 2020 Aussie studies all highlighted the low HRV (sympathetic nervous system dominance) found in ME/CFS during sleep. Similar findings showed up in fibromyalgia in 1998, 2009, 2011, and 2013. It was remarkable to see two studies – one in ME/CFS and one in fibromyalgia – pour through a maze of sleep findings only to conclude that reduced heart rate variability (i.e. reduced vagus nerve, or parasympathetic nervous system activity) was the main factor behind the poor sleep in these diseases.

In 2019, Boissoneault and Staud produced a nice “bifecta” when they showed that lower heart rate variability (read lower parasympathetic nervous activity), in conjunction with lower blood flows to the brain, predicted how fatigued people with ME/CFS were.

Doesn’t this result say it all?

“Autonomic hypervigilance during the deeper, recuperative stages of sleep is associated with poor quality sleep and self-reported wellbeing.”

How could a hypervigilant autonomic nervous system (i.e. an amped-up fight/flight response) during deep sleep be anything but bad? Note that you could be having plenty of slow wave or deep sleep, but if it’s poor deep sleep, it’s probably not doing that much good.

What do we lose by not having good deep sleep? Deep sleep is when the body does much of its repair work. Your immune system rebalances itself, your tissues repair themselves, your cells regenerate, your metabolism readies itself for the next day, and your brain detoxifies itself. It’s no wonder that you might feel “unrefreshed” – a kind word for feeling like you haven’t slept at all – when you wake up in the morning feeling like you’ve been pounded by a 2×4.

Some things (meditation, Tai Chi, exercise in FM) have been shown to improve parasympathetic nervous system functioning, but not everyone wants to take the time to give these a shot and not everyone will benefit, as well. Low-dose trazodone and doxepin elixir can help keep a lid on the fight/fight response during sleep as well, but like any drugs, they don’t help everyone.

We clearly need better options. How does clipping a small electrode to your ear sound?

Vagus nerve stimulation presents an enticing possibility. No need to take drugs or engage in hours of meditative activity (meditating, Tai chi): simply attach a small electrode to your ear and let the device do its work. (Surgical implantation of VNS devices is used in epilepsy and worked great in a person with fibromyalgia but is not readily available.)

The transdermal or non-invasive device provides a low-voltage current to a vagus nerve ending in the outer ear. Because 80% of the vagal nerve fibers found in the ear go to the brain, transdermal vagus nerve stimulation mainly affects the brain.

The problem has been that VNS’s promise has not nearly been met. Right now, non-invasive VNS stimulation is less like a medically informed solution than a venture into the wild west of medical devices.

Things are starting to get worked out, though, and the POTS crowd is leading the way. At the 2022 IACFS/ME International Conference, Lauren Stiles – the leader of Dysautonomia International – now in its 10th year (that went fast!) had some good news.

After noting that VNS had helped her a lot, Stiles, who is usually quite conservative in her statements, stated that she believes  VNS is going to be a big deal in both POTS and ME/CFS. She believes its ability to reduce inflammation is going to be key.

Some people have found it to be very effective. Others, of course, have not.

The problem has been in figuring how to use the device properly. A step forward was taken in that problem recently with a paper by Vanderbilt and University of Milan researchers, “Transdermal auricular vagus stimulation for the treatment of postural tachycardia syndrome“. The paper addressed “crucial methodological aspects of tVNS”.

The authors focused on studies in a variety of diseases that provided information on the device’s effects on heart rate, blood pressure, heart rate variability, and/or vagal, sympathetic, and inflammatory markers.

The first conclusion of the overview was that transdermal (non-invasive) vagus nerve stimulation can work. In general, the studies showed that it can lower the heart rate (heart rates are high during sleep in ME/CFS/FM), improve symptoms, and reduce markers of inflammation.

Then it was onto the methodological conclusions.

Studies indicate that the right ear, and possibly the concha portion of the ear, are the best place to put the device. (Image from the study.)

Right ear only – with the right side of the brain governing “neurocardiovascular-sympathetic interactions”, it’s crucial that the device be attached to the right ear. Although the evidence isn’t as clear, it may be that the best attachment point may also be the cymba conchae rather than the tragus.

A short pulse width of 130μs produces significantly less overall activation in the human brain than longer pulse widths of 250μs and 500μs.

We don’t know which settings work best in POTS, ME/CFS/FM or long COVID, but a start has been made in POTS. Schiffer stimulated the right cymba conchae in 1-hour stimulation blocks, 4x’s a day for 14 days using the Nemos© device (Cerbomed, Germany).

She used a pulse width of 200μs and a squared impulse waveform which caused the stimulator to switch on and off every 30 seconds. She set the stimulation frequency at 25Hz and the electrical current was set to the highest intensity each participant could tolerate without causing discomfort.

A statistically significant reduction (P<0.05) of orthostatic intolerance and gastrointestinal symptoms, as well as a total general reduction in autonomic nervous system symptom scores (COMPASS), was found. Side effects were minimal and no one dropped out.

Four POTS studies underway should tell us more. Some studies are using the NEMOS device while others are using TENS devices that have more flexibility. Stiles said she hoped NEMOS would make a device specifically for ME/CFS/POTS.

The Schiffer study – which appears to have used a regimen similar to epilepsy – may have set an upper limit on the time needed to wear the device (4 hours/day). Stiles said other studies have found much less time was needed to produce a result.

She also said she’s very involved with the RECOVER project and quite frustrated with its unwillingness to add more autonomic neurologists.

The studies underway should give us much more information on what works and what doesn’t.

Better sleep, immune and gut functioning, etc. could all be a little electrical device away. While vagus nerve stimulation’s promise is not certainly fulfilled, for the first time real progress is being made and with a number of trials underway, we should, over the next couple of years, get a much better idea of these devices’ capabilities and how to best make them work in diseases like ME/CFS, POTS, FM and long COVID. While they don’t tend to be cheap, since they’re a one-time investment, they could be very cost-effective over time.

The results of the NIH’s SPARC (Stimulating Peripheral Activity to Improve Conditions) project will take longer to filter down to available devices, but a major goal of the project is to determine exactly which fibers at which degree of stimulation can be manipulated to produce results. SPARC envisions a world with a lot fewer drugs and many more safe and side-effect free devices that help return us to health.

With over 260 people contributing about 25K, our end-of-the-year drive is roaring away. Thanks very much to everyone who has contributed.

Could we take back the rest and digest with VNS? Let’s hope so!

Health Rising has produced many blogs on vagus nerve stimulation, and if you know anything about it, you may know it from our pages. This blog was particularly exciting because it suggests that a page may be turning with this technology, and instead of fumbling around in the dark trying to use it (I tried it on my left ear…sigh), we should relatively soon have a better idea whether to use it, and if works, how to use it.