The Anxiety Question in Chronic Fatigue Syndrome and Fibromyalgia: Is the Autonomic Nervous System to Blame?

The “anxiety” in POTS, ME/CFS and FM: is it primarily emotional or physical?

The diseases are different. Flu-like symptoms are more common in ME/CFS and pain is much more intense in FM. Post-exertional malaise – a key symptom in ME/CFS – is never mentioned in connection with anxiety and is apparently not present. The crippling feelings of of dread and fear often present in anxiety are rarely present in ME/CFS; many studies indicate that emotional issues contribute little to the functional problems in ME/CFS while physical issues dominate.

Still a common core of symptoms – feeling tense, trouble concentrating, muscle tension, dizziness, abdominal pain, shortness of breath, etc. – are found in ME/CFS, FM and anxiety. It’s as if the more extreme emotional symptoms have been stripped away leaving a body and mind on edge.  Emotional issues are often present, but at a “sub-clinical” level. They’re not enough to trigger a diagnosis of anxiety but are enough to be aggravating. Plus, similar problems of catastrophizing and hypervigilance are fairly common.

I recently experienced an ebbing of many of these symptoms – the muscular tension, the trouble concentrating, the restlessness, the chronic pain, the difficulty taking deep breaths- while using a device that stimulates the vagus nerve. That made me wonder if  autonomic nervous system problems could be behind many of these symptoms.

Given the continuing emphasis on behavioral approaches to ME/CFS and FM in some countries it’s an important question. A recent study from Belgium reported that 45% of ME/CFS patients had a mood disorder. A 2013 UK study stated that symptom focusing and beliefs about damage were particularly prevalent in ME/CFS patients with anxiety.

As it turned out, a recent study addressed this issue in POTS and two other autonomic disorders (vasovagal syncope, hypherhidrosis). It noted the overlap between POTS and anxiety extends both ways; POTS patients often experience anxiety issues at a subclinical level, while people with anxiety often experience POTS symptoms (dizziness, tachycardia, sweating), also at a subclinical level. (Anxiety, interestingly, is associated with a greater risk of fainting while doing a tilt table test).

They assessed the role of the autonomic nervous system in producing  anxiety like states by the participants interoceptive awareness as they did exercise and stress tests. They proposed that their enhanced awareness of their heartbeat and other symptoms was making them more anxious. Even in healthy people a greater awareness of one’s heartbeat is associated with increased anxiety.

Plus, they proposed that the autonomic hypervigilance present in POTS and the array of symptoms it produces was necessarily anxiety-provoking. The anxiety in POTS was not due, they felt, to neurosis or trauma as in anxiety, but to a disconnect in the brain between the symptoms an environment should evoke and the cascade of symptoms often present in POTS.

The authors hypothesized that the anxiety type symptoms POTS patients experience were due to an over-awareness of their physical symptoms (i.e. an interoceptive problem). This didn’t suggest that people with POTS focused more on their symptoms but that their symptoms were so present that they were difficult to ignore. 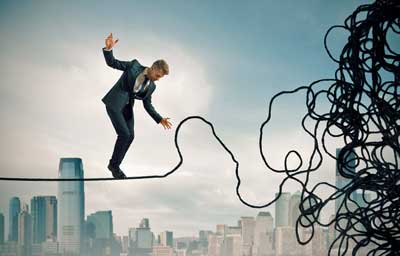 An under-active insula may be responsible for some of the anxiety-like symptoms seen in POTS.

More importantly, though, they suggested the insula in POTS (and other autonomic nervous system diseases) was under rather than over-active. The insula creates an internal map of the body by interpreting sensory signals. In order to do that it compares expected vs experienced internal body states.

The authors essentially believe the brain expects one thing, and gets another in POTS.  It’s the confusion between the expected sensory state and the sensory flood POTS patients experience that causes the brain to create anxious feelings.  The anxiety in POTS is driven, therefore, not by emotions as in anxiety, but because the insula, which regulates both autonomic nervous system functioning and sensory processing, is struggling.

As the brain struggles to make sense of its situation, the ability to track one’s heart beat becomes more difficult – not less. POTS patients brains, then, are not tracking their symptoms more carefully; they’re simply getting overwhelmed by them.

Plus, the cognitive demands placed on the brain to make sense of the situation makes paying attention to other events – walking, talking, reading, listening – more difficult.  One study suggested that chronic fatigue syndrome patients, for instance, can either walk or think but don’t do both at the same time easily. When asked to do a mental task during walking, many ME/CFS patients invariably looked down at their feet to determine where to place them.

Other Ways to Produce Anxiety-Like States

Autonomic nervous system problems and anxiety were clearly linked in a recent fibromyalgia study which found a strong correlation between reduced heart rate variability and fibromyalgia.

Tryptophan depletion (read serotonin depletion) has been associated with autonomic nervous system problems and anxiety in healthy people as well, (Mady Hornig is hot on the trail of that in ME/CFS).  Aberrant autonomic nervous system functioning has been associated with the development of anxiety in autism spectrum disorder. (Dr. Naviaux believes autism and ME/CFS are related.)

Dr. Bell’s story of Maggie, an ME/CFS patient diagnosed with panic disorder, vividly demonstrates how easily anxiety can be misdiagnosed.  Maggie was exhausted, had cognitive problems, night sweats, swollen lymph nodes, sore throats and headaches and had trouble standing. Instead of panic disorder, though, Maggie had extremely low blood volume which lead her body to pump out epinephrine (adrenaline) in an attempt to get the blood to her brain when she stood. That adrenaline was producing her “anxiety”.  Maggie essentially had a blood flow disorder; when Dr. Bell treated her for that and some other orthostatic issues her “anxiety” disappeared.

Health Rising’s December Donation Drive Update – Thanks to everyone who has contributed we are about 60 percent of our way to making our goal. Please give a little (or give a lot) and support Health Rising as we make our way to what looks like it will be an exciting 2017. Use the donation widgets on the right hand side of the page or click here to find out more.