Getting Well: A Chronic Fatigue Syndrome and Fibromyalgia Mind Game

I came across a powerful practice the other day that I wanted to share. Used by coaches associated with Landmark Education it involves a subtle but powerful shift in how we approach major goals like getting healthy.

First they have their clients envision their big goals – goals they have difficulty accomplishing: goals that involve their careers, their family and relationships, their health, quality of life, etc. Then they have them envision the goals being fulfilled – complete – accomplished. 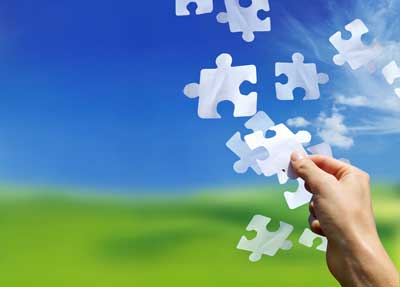 The practice revealed some things I could be doing right now.

Then starting from that point (the goal achieved) they have their clients look back and determine how they got there. What actions did they take? How did they change what they were doing? What, in short, worked?

That shift from what we usually do –  placing ourselves in the present and looking towards an uncertain future –  to placing oneself in the future and looking back to the present can make a big difference.  For one, big goals – like attaining one’s health – can seem insurmountable looking from the present. They certainly look uncertain.  Looking from a future accomplishment, on the other hand, provides an entirely different kind of energy.

It also provides a kind of vision that we don’t usually have. Doing this practice revealed things I could be doing now which I’m not doing –  things I tell myself I’m going to do, but often put off and off.

As I did the practice it became clear to me that I mostly just keep on doing what I’m doing.  I’m basically adrift,  moving to my goal of better health at a snail’s pace.

There are, of course, no guarantees.  Achieving one’s health after decades of a chronic illness is a pretty big goal.  This practice concentrated my mind, though, and gave me some energy.

After envisioning returning to health I looked back. These were the things I did that helped me get there.

Look back – from the future – that’s how I ((hopefully) got healthy after 30 plus years of ME/CFS. My guess is that more treatments will have to come a long – something else will have to pop up – for that to really happen but when it does I’ll be in a good position to maximize it.

It’s a lot of stuff and I will have to innovate and do some things I am reluctant to do but much of it is doable. I don’t know if it will work but it gives me a much better shot than I have now.

I invite everyone to do the exercise. I grant that even thinking about being healthy might seem too unachievable. If it is, you might try feeling better or just being a bit healthier. Step into that goal like its already happened and look back and see what you did to achieve it.

It would be great to hear how it happened for you.