Certainly the nervous system plays a major role in producing pain.  The immune system with its inflammatory processes and ability to create sickness behavior is certainly in the discussion, but hormones? Many women are well aware that hormonal fluctuations can boost pain levels, but could the sex hormones play a role in the genesis of the pain women and men with fibromyalgia experience? 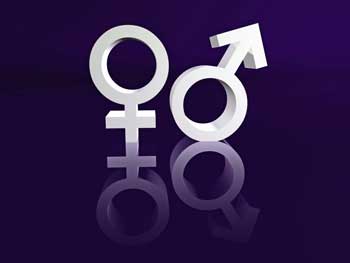 The gender imbalance has always suggested something’s up with the female hormones in FM and ME/CFS.

It turns out that the evidence rather strongly suggests that they might.  A major gender gap in the incidence of both fibromyalgia and chronic fatigue syndrome (ME/CFS) suggests that sex hormones must play at least something of a role in these diseases. Animal studies indicate not only that females are more sensitive to pain but also that that sensitivity can be altered by changing their hormone levels.

The fact that that gender gap appears only when girls reach puberty strongly suggests something’s up with the hormones in fibromyalgia. Reports abound of improved pain and fatigue during pregnancy for some women with ME/CFS/FM. Plus several studies indicate greatly increased rates of gynecological disorders in ME/CFS.

Studies indicate that sex hormones affect the activity of pain receptors, the central pain-processing pathway in the brain, inflammation in the spinal cord, the microglia in the brain and opioid pain processing. Two sex hormones in particular – testosterone and progesterone – appear to have pain diminishing properties, and progesterone has anti-inflammatory and neuroprotective effects as well.

Given the abundant evidence indicating that sex hormones can indeed affect pain, it was no surprise to see Jarred Younger at the University of Alabama at Birmingham publish on this subject. His recently published study was small but intense. The fact that only eight FM patients participated in the study means we can’t know if their results apply to the FM population as a whole, but that wasn’t the point of the study. The point was to generate enough exciting data to get the next, bigger study funded, and in that Younger surely succeeded.

Younger belongs to a newer generation of researchers and he’s doing different kinds of studies. Instead of taking one measurement and hoping it reflects what’s going on in the body over time, Younger has taken people with ME/CFS or FM and tested them every day for almost a month.

Then he’s correlated their biological data with their symptom data in order to try to understand what’s going right when they’re feeling better, and what’s going wrong when they’re feeling worse.  The daily blood draw studies clearly take a lot from both the participants and the staff (no weekends off) but the results have been fascinating.  Immune factors, for instance, have popped out which nobody expected to pop out.

The green line is progesterone (highest in the luteal phase); the red line is pain. Note how they diverge in these fibromyalgia patients.

Younger noted that this was the first time pain levels and sex hormone levels had ever been tracked on a day-to-day basis in humans, but a very large (@10,000 person study) also found that lowered sex hormone levels (estrogen, testosterone, androstenedione, and 17-hydroxyprogesterone) were associated with an increased prevalence of chronic muscoskeletal pain.

What exactly is going on is still a mystery, but some hypotheses exist. Progesterone could be tamping down inflammation or modulating nervous system activity.

Estradiol then upregulates the production of the endogenous (self-produced) opioids which cause pain relief. She believes the lower testosterone levels found in FM (and other pain disorders) prevent this inhibitory pain network from functioning properly. Once that inhibitory pain network goes off the rails, pain sensitivity spikes higher and higher, and instead of stress reducing pain, it provokes it.

The cortisol/progesterone interaction Younger found suggested that high stress (high cortisol) combined with low progesterone was a recipe for more pain in FM. White is not the first to propose that stress enhances pain in FM. Dr. Martinez-Lavin proposes the same thing in his book “Fibromyalgia: When Stress Becomes Real Pain and What to Do About It”. Eighty percent of the FM/ME/CFS patients taking the poll (which is still open) on the blog strongly agreed with the statement “I notice that stress is associated with pain or discomfort”.

The cortisol/progesterone interaction Younger found was fascinating and significant, but Younger believes many more factors probably come into play.  He wondered what a study exploring adrenal and thyroid hormone levels, neuropeptides, neurotransmitters, cytokines, and other factors might find and even suggested that “an optimized set of analytes could predict most pain fluctuations in fibromyalgia.”

Finding out what blend of hormones, neurotransmitters, cytokines, etc. are setting off the pain signals in FM and ME/CFS would, of course, be a huge step forward.  Since the body is essentially a set of complex networks which interact with each other, the only way to truly get at the changes that occur is to assess what’s happening in those networks. Younger clearly wants a chance at doing that.

It wasn’t so long ago that we simply didn’t have the computer capacity or statistical methods to do such data intensive studies. The one-off studies which use one data point to try to understand a massively complex body that is changing over time still have their place, but more and more studies which intensively sample patients over time to try and get a grasp of the mechanics behind illness are getting underway.

Dr. Klimas’s intensive sampling regimen during and after exercise is uncovering why exercise is so difficult in ME/CFS and Gulf War Illness.  Dr. Systrom is doing a similar protocol using invasive CPETs in ME/CFS.  Dr. Lipkin and Dr. Hornig are assessing immune factors over a year in ME/CFS. Lenny Jason is tracking what happens to college students after infectious mononucleosis as some come down with chronic fatigue syndrome (ME/CFS).

Even though sex hormones appear to play a significant role in producing pain in FM, the levels of these hormones in FM patients were actually “normal”.  Perhaps it’s time to redefine what normal is in the context of illness. The research in FM, POTS, ME/CFS and Alzheimer’s suggests that “normal” levels of sex hormones, iron, leptin, cytokines and other factors may not be so normal after all. Cytokine levels were “normal” in the Montoya/Davis immune study which nevertheless strongly implicated them in fatigue severity in ME/CFS.

These findings suggest that when a different biological context such as a disease is present, the rules of normality no longer may apply.  A factor which appears to be within the normal range may, in these changed systems, be having unanticipated effects. Within the context of fibromyalgia, “normal” levels of progesterone and testosterone may actually be too low. Higher, but still normal, levels of cortisol in combination with low, but normal, levels of progesterone may cause pain levels to shoot up. Dale Bredesen’s functional medicine approach to Alzheimer’s seeks to create optimal instead of normal levels of many nutrients and metabolic factors.

A third of the women reported a 50%, or greater, decrease in pain. Forty-two percent were reported to have a 33%, or greater, decrease in pain. Tender point sensitivity was significantly reduced. Libido was significantly increased. The treatment had no effect, though, on headache severity, sleep, anxiety or depression. White also found reductions in fatigue and has proposed that her testosterone gel can help with the intractable kind of fatigue found in chronic fatigue syndrome (ME/CFS).

Hormones are tricky. Doctors prescribed progesterone/estrogen in post-menopausal women for years thinking it protected them from heart disease only to have a very large study indicate that it actually increased their risk of blood clots and strokes and had no positive effects on heart disease. Since then further studies indicate that  synthetic progesterone/estrogen is generally effective and safe for women younger than 60 or within 10 years of menopause while women over 60 or over 10 years after menopause may face more problems. A doctor’s advice is crucial in making a decision in this complex subject.

Seeking to get a boost, healthy middle-aged and older men have been downing testosterone in the billions of pills.  Testosterone supplementation, though, doubled the risk of heart attacks in older men and tripled it in middle-aged men with prior heart problems.  Some trials have not found increased risk, but like other hormones, once you get on testosterone, it may not be possible to get off. That said, for people with low hormone levels, hormone supplementation can be quite helpful.

White reported that the American Society for Reproductive Medicine’s Princeton Consensus Statement recommends treating women with gonadal hormones if clinical symptoms such as diminished sense of well-being and chronic fatigue are present. The North American Menopause Society recommends treatment with gels or creams (not pills) for symptoms of decreased sexual desire, if blood monitoring is done. Several alternative MD’s report using testosterone successfully in some of their FM and ME/CFS patients. Kent Holtorf’s 2009 review asserts bioidentical are safer and more effective than synthetic hormones. Several medical societies caution against using them.

Fibromyalgia, like ME/CFS, might very well be cured by using multiple factors that edge the system back to normal. The good news about both FM and ME/CFS is that, aside from small nerve fiber problems – which may be able to be ameliorated –  evidence of tissue destruction is rare. Hopefully, Younger’s study is one step on the path to understanding the multitude of factors that result in FM and finding the right combination of treatments to set them right.

Jarred Younger on the Study