The Centers for Disease Control (CDC) flew in about 40 people from over two dozen organizations for the one-day CDC Roundtable on Medical Education and ME/CFS. It was a busy 24 hours. Everyone flew in the night before to a hotel near the airport, spent the next day working at the hotel, and then flew out that night. 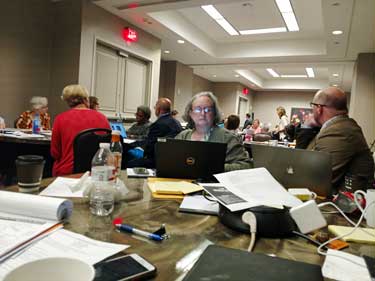 Vicky Whittemore, Todd Davenport and a table strewn with papers. To the left of Vicky facing away is Dr. Montoya

The Roundtable was part of a continuing outreach effort by the CDC to bring in stakeholders in ME/CFS (doctors, health care professionals and patients) to improve how they communicate about chronic fatigue syndrome (ME/CFS) to the public. Two years ago a similar group met.

The CDC was looking for input on draft materials on how to educate physicians about ME/CFS and how to help prepare ME/CFS patients to meet with physicians and get their story heard.

I was lucky enough to sit at a table with Dr. Klimas, Todd Davenport of Workwell, Vicky Whittemore of the NIH, a CDC rep (who constantly critiqued her organization’s materials :)) and a CDC facilitator.

Everything was on the table – content, formatting – whatever could improve the delivery of the materials was fair game. If it was input they wanted, they definitely got it. The suggestions came fast and heavy. It was rare to go for a couple of paragraphs without a suggested change. The CDC seemed amenable to changes: the time the meeting was done our facilitator had made pages and pages of notes.

At the meeting I got a chance to talk to Dr. Unger about the CDC’s multisite study and Dr. Klimas about her upcoming ME/CFS clinical trial.

The huge multisite study featuring seven different ME/CFS doctors and their patients began in 2012. Dr. Unger gave a presentation on the initial findings at the FDA Workshop in 2013. In 2014 she reported analyses on the data were underway, that publishing was a priority, and that papers on medication use, medical history would be submitted as soon as possible. Four years later, except for a summary of the study’s makeup in 2017, nothing has been published or reported since.

The study was truly massive: 471 patients in the first round and even more in the second round which added two rarely studied subsets (pediatric patients and the severely ill) and two comparison groups (healthy controls and an ill comparison group including people with fibromyalgia, rheumatoid arthritis, multiple sclerosis, and cardiovascular disease).  The practitioners agreed to standardized testing protocol. They still do their own tests, but all patients in the study got a core set of tests. 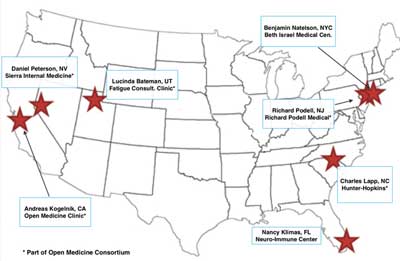 Some biologic data (routine laboratory and morning cortisol) was collected and an exercise study was reportedly to be done.  The blood and saliva samples will go to form the basis of a potentially very helpful biorepository, given the extensive data collected from these patients.

Virtually everything the CDC could learn about these patients they have learned: symptoms, illness trigger, medical history, family history, medication use (supplements to drugs), lab test results, and functional level. The study should improve diagnostic protocols and help clarify patient subsets. The functionality and medication use data should allow the CDC to provide data on the effectiveness of treatments (IVIG, Ampligen, antivirals, etc.) rarely used by most doctors. The study should  also be able to tell us if spending a lot of money on more proactive treatment protocols is more effective than going with more conservative treatment protocols.

Importantly Dr. Unger has said the results will help inform the CDC’s future educational materials. The study, then, could help surmount the “evidence-based” result hurdle which, for years, kept the CDC tied to the only protocols (CBT/GET) which have received much study.

The CDC appears to have decided not to report on the first round of the study and will combine the results of the first and the second round – which has just finished up.

The CDC’s funding woes have not helped.  For the past couple of years the CDC’s funding has been cut out of the Congressional Appropriations Bill and then put back in. Unger said she has to rely on budgetary maneuvers (which take time out of her day) to keep the work flowing, plus not having a set budget every year does not help with hiring personnel.

More on the Multisite Study

The CDC gets a lot of flack, but they’re involved in a number of potentially very helpful activities including:

It’s always fun to sit at a table with Dr. Klimas. The information just flows and flows as her nimble mind considers one topic after another. It’s like a force of nature – it’s fun to just to sit back and watch her work.

Cortene’s attempt to do a system reset in ME/CFS has generated a lot of interest. Cortene brought a new drug to the field, funded it, and enrolled ME/CFS doctors in the CT38 trial that is now underway. Dr. Klimas got her ME/CFS reset trial going using another technique – coercion. Both clinical trials are unusual in that both hope to reset ME/CFS patients systems back to normal – forever.

The Cortene Way: New Drug to Be Trialed in Chronic Fatigue Syndrome (ME/CFS) Soon – Pt. I

When you can’t get funding through normal channels, you get creative, and Dr. Klimas has been nothing but creative in her ability to build a Gulf War Illness (GWI) modeling platform, hook ME/CFS into it, and use her GWI funding to explore ME/CFS. Her group has grown and grown and now includes computational biology, animal modeling, genomics, cell biology specialists and more.

Now she’s using another disease – Parkinson’s disease, no less – to get a treatment trial for ME/CFS underway. Parkinson’s Disease may not be so far off the beaten path as one might think. When Dr. Klimas opened the Institute of Neuroimmune Medicine in 2013 she included it, along with M.S. and other neuroinflammatory and neurodegenerative diseases, within the Institute’s purview.

That may have been prescient indeed.  It turns out that Dr. Klimas’ engineering-computational biology techniques are in demand. She went way out on the skinny branches when she poured a ton of resources into an unproven and innovative approach to disease.  When I asked Gordon Broderick, the head of the program at the time, if anyone else was doing what they were doing, the answer was an emphatic “no”. 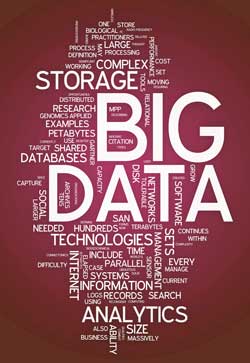 The models found that exercise first kicked off a mess of inflammatory pathways in ME/CFS which then faded in importance. Four hours later oxidative stress, the autonomic nervous system, stress and sensory pathways, and HPA axis pathways became upregulated.  The models indicated that if you could tamp down inflammation and then try to reset the HPA axis, the system might revert to normal.

At least one major disease group thinks Dr. Klimas has struck gold with her approach. The Parkinson’s Foundation is apparently so excited at the possibilities of computational biology that they wanted to transport her and her entire team into Parkinson’s research. When that thankfully failed, they gave her a nice, big budget to get access to the computational modeling platform and train another team how to use it.

(The Parkinson’s effort will use the Institute’s modeling platform to understand the dynamics of the central nervous system in producing the disease. Studies are already underway using mouse models (Parkinson’s has a couple of them) to improve the current model.)

In return, she asked the Foundation to fund a 20-person ME/CFS trial.  That trial is expected to begin this fall. It will include post-menopausal women and use the same drug combination (etanercept and mifepristone) used in the GWI trial.

Mouse models in GWI indicated that using the drugs in a staggered protocol – first to tamp down inflammation and then to reset the HPA axis – caused the immune, autonomic, hormonal, etc. systems of the mouse to normalize. Klimas does not have an animal model for ME/CFS, but the computational biology modeling has for years suggested the same will happen in ME/CFS. She just hasn’t had the funding to test it until now.

The participants will do an exercise test – then take down inflammation using etanercept for a month and then rebalance the hormonal system using mifepristone. If the model is correct, the treatment combination will push ME/CFS patients’ systems back to health.

The Gulf War Illness trial started earlier this year. I don’t know the results.  The ME/CFS trial should either have started by now or be beginning shortly. (It’s already filled up.)

We’re in for some exciting results – from the long awaited multisite study, to the Cortene trial, to the metabolic trap hypothesis work (next blog), and to Dr. Klimas’ two-drug trial. No one has ever had the audacity to suggest they might not only help people with ME/CFS but may be actually able to reverse it. Now two groups think that’s a possibility and, if the metabolic trap hypothesis works out, we’ll probably be able to add a third group to that set.

It may be that none of these efforts will work out but each should still inform us about ME/CFS. Dr. Klimas, for instance, will be gathering massive amounts of information in her trials and has powerful models she can tweak if that particular drug combo doesn’t work out.  Similarly, Ron Davis has the resources of the Stanford Genome Technology Center, a huge study underway with Stanford geneticist Mike Snyder, and a new collaborative ME/CFS Research Center at Harvard if the metabolic trap doesn’t work out.

Meanwhile the CDC’s multi-site study – perhaps the biggest study ever done in ME/CFS – might be able to start getting ME/CFS experts protocols into the medical mainstream giving patients more options. Plus the CDC is working on ways to increase diagnosis rates, get ME/CFS into medical school curriculum’s, produce acceptable clinical outcome measures for drug trials and more.