“The Universe is always changing. Everything can change in a moment. You never know what will happen in the future. Never stop fighting. I’m fighting with you. If you feel like giving up, give it to me. I will carry it for you.” Whitney Dafoe

This is the 7th Severe Myalgic Encephalomyelitis (ME) Day of Understanding and Remembrance – a day which marks the birthday of Sophia Mirza. Sophia Mirza’s death from ME in 2013 at the age of 32 in the U.K. brought widespread attention to the plight of the severely ill for the first time. 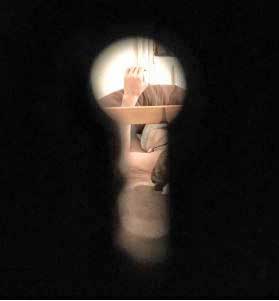 Whitney’s fighting fist seen through the keyhole in his door.

As often occurs with the severely ill, Sophia’s severe debility and extreme sensitization to many kinds of stimuli made her life a living hell, and as so often occurs, the medical system’s response only made things worse. Considered an “attention-seeker” with an enabling family, she was sent to a psychiatric facility where her health declined rapidly.  Sophia’s death was not in vain: the coroner’s autopsy report, which found massive spinal cord inflammation and damage to her dorsal root ganglion, received widespread publicity.

While little has changed for most of the severely ill, their plight is much better known now as the result of Sophia Mirza’s, Whitney Dafoe’s and others’ stories.  For the first time, the severely ill are being included in research studies. The Open Medicine Foundation, under Ron Davis’s direction, has devoted approximately two million dollars to the Severe ME/CFS Big Data study, and the CDC included the severely ill in the second iteration of its Multisite ME/CFS experts study.

While recovery is obviously very rare, some people with very severe illnesses, such as Mike Dessin and Kyle McNease, returned to normal functioning.  McNease writes in an upcoming blog:

None of it has been easy. None of it has been traditional. …My one piece of advice for anyone who might read anything I’ve written is don’t give up. If you’re suffering from this horrible disease, the good news is that there is so much more that can be done for this patient group…and treatments will come. Let’s try to live long enough to see them come to fruition.

Given the right treatment, Whitney could clearly join Mike and Kyle.  Whitney Dafoe is about as sick as you can get. Unable to talk, drink or eat he’s been fed by feeding tubes for years and yet….remarkably enough, the old Whitney – the old thoughtful, sensitive, and yes, the hopeful Whitney – he’s still there!

Ron Davis and Janet Dafoe, his parents, have found that Ativan is able to rouse Whitney for short periods, and during these periods, as ravaged as his body and nervous system are by this disease, Whitney has been able to provide remarkably thoughtful communications which indicate that, given the opportunity, their thoughtful, sensitive son should be able to return.

On Severe ME Day, check out an inspiring and bracing communication of hope from the OMF, Whitney’s mother, Janet Dafoe, and Whitney himself. For me, it’s a reminder to never surrender, as appealing as it may be, to resignation, despair or anger; to never stop believing in the possibilities that are present. The universe, as Whitney noted, can shift in an instant. Never give up!

In recognition of #SevereMEDay, we would like to share this touching message of hope from Whitney (Ron Davis and Janet Dafoe’s son), which he conveyed to his mother with great effort. Whitney offers a reminder to each member of the patient community that they are not alone in this fight:
“Last night, when Whitney was on Ativan, I told him that August 8th is Severe ME Day and asked if he would like to send a message out to the patients around the world. He wanted to know if it would go out to patients all over the world and how it would be sent. I told him that OMF would send it out and that lots of people would retweet it and repost it and that his message would go really far.
What happened next was amazing. He closed his eyes and thought about it for a long time. Then he took an hour using Whitney Sign Language to dictate it to me. Word by word. If you look at the words you will be able to imagine how hard it was and how long it took. In between sentences he closed his eyes and after long pauses he’d start on the next sentence. He was crashing when he finished. He really is dedicated to helping patients! Here is his message:
“The Universe is always changing. Everything can change in a moment. You never know what will happen in the future. Never stop fighting. I’m fighting with you. If you feel like giving up, give it to me. I will carry it for you.”
With love and hope,
Janet”

This is not the first time Whitney has inspired others. Martha has a familiar story – she’s had to fight our health care system every step of the way; she’s lost many of her friends and important relationships; her career plans are shattered; her ability to do so many things gone…She felt herself sliding into doubt and despair and then thought of Whitney struggling simply to survive, and declared that was over.

Martha, you are not allowed to doubt the reality of your condition… If you allow the doubt that has been cast upon you to turn into and onto yourself, then you are also doubting the very reality of Whitney’s condition…as well as all of the “Whitneys” of this hidden world of illness who will never be featured…and never be seen.

So, on Severe ME.Day, here’s to fighting the despair, hopelessness, resignation and bitterness that are so easy to succumb to – and to keeping up the good fight – the fight for a healthy future for all of us and those that come after us.

“The Universe is always changing. Everything can change in a moment. You never know what will happen in the future. Never stop fighting. I’m fighting with you. If you feel like giving up, give it to me. I will carry it for you.” Whitney Dafoe