A couple of years ago, there was hardly any discussion of spinal issues in ME/CFS. It’s become clear, though, that spinal issues are present in some patients and can even, in some instances, produce virtually all the symptoms found in this disease.  From cerebral spinal fluid leaks, to spinal stenosis, to intracranial hypertension, to craniocervical instability, the spine is now of intense interest.

This study was notable for a couple of things. For one, it appears that Sweden is moving rapidly on 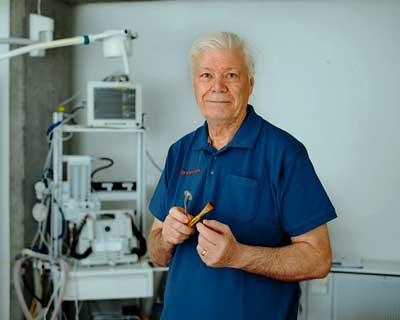 Something is happening in Stockholm – it now has two ME/CFS clinics. Bjorn Bragee – creator of the ME/CFS Bragee Clinic in Stockholm

ME/CFS. Not only has a large collaborative effort formed around the Open Medicine Foundation’s Uppsala Collaborative ME/CFS Research Center, but a newly formed – apparently quite busy – ME/CFS clinic (Bragee Clinic) has shown up in Stockholm. (That makes two ME/CFS clinics in Stockholm, now.)

Bjorn Bragee, the creator of the clinic, talked about it:

“We need quality research and a better understanding available in public health care regarding this diagnosis. At our clinic we will be working from a biomedical perspective and staying updated on new available treatments. So far, there is no treatment that works for everyone. “Many are bedridden at home and their quality of life is alarmingly low.”

Created in 2017, the clinic worked quickly to gather what may be the largest array of MRIs collected for ME/CFS.  These 200- plus MRIs were used to produce easily the biggest assessment of spinal issues in ME/CFS. The group used the MRIs and a clinical examination to assess intracranial hypertension, joint hypermobility, Ehlers Danlos Syndrome, various conditions that can obstruct spinal fluid flows, spinal issues and craniocervical instability.

Nobody expected Sweden or anywhere else to so quickly focus on spinal issues but Bragee jumped on this issue quickly, and here we are with a quite large ME/CFS spinal study.

Intracranial hypertension occurs when high cerebral spinal fluid pressure is present. Its symptoms are similar to those produced by a brain tumor and include frequent headaches, blurry or double vision, poor peripheral vision, dizziness, nausea and/or vomiting, stiff neck, gait and coordination problems, tinnitus (ringing in the ears), forgetfulness and depression.

Craniocervical Instability refers to a condition where lax ligaments which hold the head up over the body allow the brain to impinge upon the brainstem, spinal cord or nerve roots. Symptoms can be diverse but generally include headache, neck pain, numbness, heavy feeling head, “bobble-head”, dizziness, vertigo, gait and coordination problems, muscle weakness, problems with sleep and visual disturbances. Jeff, Jen Brea and others diagnosed with ME/CFS were found to have CCI. Jeff and Jen Brea made full recoveries from severe cases of ME/CFS after surgery.

A major downside to this study concerns its mode of publication. Instead of being published in a peer-reviewed medical journal, it was published on a non-peer reviewed “open access site“. That will greatly limit access to the study and blunt its impact.

The authors didn’t say how they determined severity but reported that the study examined a severely ill patient group.

The authors used well-established non-invasive means of assessing IH including:

The group also looked for structural problems which could result in reduced spinal fluid flows and IH. They included:

The authors used something called the clivo-axial angle (CXA) to assess craniocervical instability (CCI).  Experts agreed in the 2013 Consensus Statement on Craniocervical Instability that four tests can be used to assess craniocervical instability. The Consensus states that a clivo-axial angle (CXA) 135º or less is possibly pathological, and that, in some circumstances, stress the brainstem and spinal cord. It is not a definitive test of CCI, but indicates that further investigation is warranted.

In the cervical spine MRIs, the researchers assessed a number of factors which could impact spinal cord functioning including: 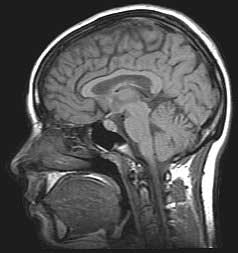 Over 200 brain MRIs were done.

An astonishing 96% of patients fulfilled the criteria for fibromyalgia. That number is quite high and may reflect the more severely ill group of ME/CFS patients the authors stated made up the study.  A 1000 person ME/CFS Spain study found that 54% had fibromyalgia.

Why the focus on joint hypermobility? Because connective tissue and lax ligament problems also underlie many of the spinal problems the authors looked at.  Lax ligaments, for instance, are responsible for craniocervical instability. Connective tissue problems can contribute to a lowered cerebellum, foramen magnum, as well. (EDS is not the only “lax ligament disorder. Others include: Loeys Dietz Syndome, Stickler Syndrome, Marfan Syndrome, Cleidocranial Dysostosis, Morquio Syndrome, Down syndrome, etc..) 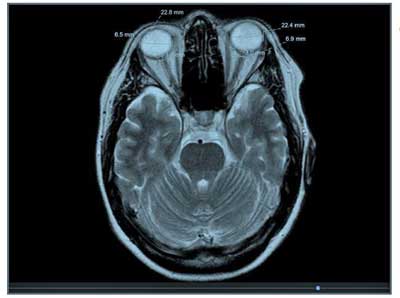 Eyeball diameter – see the two eyeballs at the top. (From the study)

Signs of intracranial hypertension (IH) were common with 55% having high ODNS ( >5.8 mm) and 83% having an ODNS/EDS ratio of greater than .25. The author reported that an ODNS/EDS ratio >.25 was associated with IH with severe symptoms.

Drooping Cerebrellar Tonsils – Fifty-six percent of patients (as opposed to a general population prevalence of 25%) had evidence of drooping cerebrellar tonsils which could be obstructing spinal fluid flows.  Seventeen percent had evidence of the more severe Chiari malformation.

The authors reported that only a fraction (11%) of the patients had what is considered a normal position of the cerebellar tonsils.

Spondylolisthesis and osteophytes were found in 6 and 9% of patients. These findings appear to be similar to those found in the population at large.  Spinal cysts or syrinxes were not found.

The authors did not break out bulging discs from herniated discs. Bulging discs are quite common and often do not cause problems. Herniated discs on the other hand are rare and almost always cause problems. The authors reported that eighty percent of the patients had one or more obstructions in the cervical spine. More than one vertebral segment from the neck to the lumbar region was obstructed in 64% of participants.

A Clivo-axial angle (CXA) angle of less than 150 degrees was found in 114 of the patients (56%). Normal CXAs are reported to range from 150-170 degrees. Henderson reported that “the CXA has a normal range of 145° to 160° in the neutral position”. One study reported a mean CXA 148° for the healthy controls  – which was identical to that found in this study.

While Van Gilder (somewhere – I couldn’t find the citation) reported that a CXA of less than 150° was associated with neurological changes, most authors and the CCI Consensus Statement report that only a much smaller CXA angle (135 degrees) is considered possibly “pathological” and indicative of craniocervical instability (CCI). The authors of this paper did not report how many patients met the more restrictive criteria. 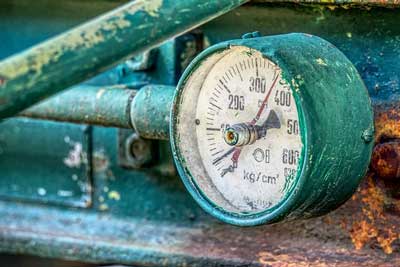 High cerebral spinal fluid pressure – the main finding in this study – can produce many symptoms associated with ME/CFS.

A very high incidence of fibromyalgia comorbidity and the almost 50% incidence of hypermobility suggested that this patient population was indeed severely ill.  The incidence of Ehlers Danlos Syndrome (EDS) appeared to be quite high (20%) as well.

It was not easy to assess the incidence of spinal issues but they appeared in line with those found in the general population. Eighty percent of the participants tested, however, had either bulging or herniated discs.

Craniocervical instability (CCI) was assessed by Clivo-axial angle. Most sources suggest that the mean CXA in ME/CFS (148 degrees), was low normal or borderline (normal = 150-170 degrees). (CXAs of 135 degrees or less are likely pathological and may be indicative of CCI). Because the authors only provided a mean for the group, it’s not clear how many patients had lowered CXAs, but some clearly did. As a whole, though, the group’s CXA – and therefore, one would assume the rate of CCI  – did not appear strikingly abnormal.

The big news was the very high rates of intracranial hypertension found.  Depending on which measure was being assessed, estimates ranged from a whopping 55% to over 80% of the group. Plus, the study suggested that a strikingly high percentage of patients (17%) relative to the general population (<1%) may have Chiari malformation.

It seems the more ME/CFS is studied, the more possibilities turn up. Since IH can produce or contribute many symptoms found in ME/CFS, this study, while unpublished, will hopefully incentivize others to assess spinal issues in ME/CFS. Hopefully, the CDC’s multi-site study will shed more light on the spine. Avindra Nath is also assessing spinal issues in the intramural study.

Unfortunately, the study was not published in a peer-reviewed scientific journal and therefore will not get much traction in the medical community. Doctors will need studies published in medical journals to begin to assess and diagnose spinal issues present in ME/CFS. Hopefully, the CDC’s multisite study will address these issues.

Check out a deeper dive in intracranial hypertension

Pressure is building.  Thanks to the 182 people contributing to our drive we’re almost 50% of the way to our goal. 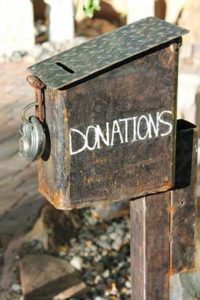 Ask yourself where you get the kind of detailed analyses that you find on Health Rising and then please consider supporting HR.

Health Rising is not a hobby site. It’s the only source of support for its one full time employee (me) and it pays for a part-time employee (Stavya).  HR doesn’t need much – our needs and its expenses are quite modest – but we do need to keep the lights on.

Please consider supporting HR in a manner that works for you.