It’s complex; it causes fatigue, pain, sleep and cognitive problems; it’s underfunded; and it’s not chronic fatigue syndrome (ME/CFS) or fibromyalgia (FM) – it’s Gulf War IIlness (GWI) – and it may be more relevant than you think.

We do have quite a bit in common. Imagine being healthy and strong, and then suddenly not being that way and then staying that way for decades. We can relate. 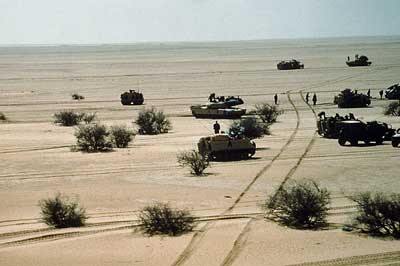 It took less than a week for Coalition ground forces to prevail during the first Gulf War, but nearly three decades later many are still suffering

It’s a remarkable thing that several wars and almost 3 decades later, about 30% of Gulf War Veterans are still sick. That’s obviously not what they signed up for, but then again we never signed up for fibromyalgia (FM) or chronic fatigue syndrome (ME/CFS) either. This study points to ways, though, that we may all be able to help each other.

Few disorders cause such a wide range of often debilitating symptoms as GWI – and few fit so well with ME/CFS and FM.  While GWI was initiated by a toxic trigger, it’s very possible that whatever is causing the fatigue, pain, sleep and cognitive problems in GWI is also causing them in ME/CFS and FM.

Jarred Younger believes that small tweaks in the microglia – the cells believed to be causing the neuroinflammation – could easily account for the slightly different symptoms found in these diseases.

The idea is that something – an infection, toxins, some stressor – primed the microglia in these diseases to become hyper-reactive and continuously pump out a vast array of nasty substances (reactive oxygen and nitrogen species (free radicals), cytokines, chemokines, inflammatory prostaglandins, proteases, excitotoxins, glutamate) that are causing pain, fatigue, etc. Once they’re primed, it just takes little, little stressors to keep them going.

Getting them primed may not be so difficult. Animal and human studies suggest that many things – infections, toxins, physical trauma, stress (including high cortisol levels), sleep disturbances, heat – can send glial cells into hyper mode. Interestingly, rodent studies suggest that experiencing a double whammy (e.g. being exposed to a toxin while you’re being physically or emotionally stressed) can really send your glial cells into a tizzy.

The study (15 GWI and 33 healthy controls, including 8 healthy veterans of the Gulf War) used positron emission tomography (PET) and a radioligand called [11C]PBR28 which binds to a mitochondrial protein (TSPO) that becomes dramatically increased during microglia/macrophage and reactive astrocyte activation. It’s considered a surrogate marker of neuroinflammation.

(Note that activated macrophages in the brain would produce the same signal. Macrophages should not be found in the brain – they belong in the body – but if they get into the brain though a leaky blood-brain-barrier (BBB), they can cause a lot of trouble. Jarred Younger is currently assessing that possibility in ME/CFS. (Past research suggests that the BBB has been compromised in GWI.))

Marco Loggia, PhD, a Harvard neuroscientist and senior author of the study, has been focused on understanding the relationship between the brain and pain. In 2016 Loggia, a leader in the field, wrote “In Vivo Imaging of Human Neuroinflammation“, which provided “an overview of state-of-the-art techniques for imaging human neuroinflammation”.

Despite the fact that GWI and fibromyalgia are triggered by very different events, Loggia hypothesized that given the huge overlap in symptoms the same pattern of neuroinflammation would prevail.

The first neuroinflammation study ever done in GWI found evidence of neuroinflammation throughout the cortical or outer areas of the brain (precuneus, prefrontal cortex, and primary motor and somatosensory areas), as well as underlying white matter and the basal ganglia. The cortical areas of the brain are involved in ‘higher-order’ functions, such as memory, concentration and reasoning.

That made sense given the cognitive issues in GWI, but the key finding may be the unusually widespread nature of the neuroinflammation – and the similarity to other findings in fibromyalgia, chronic fatigue syndrome (ME/CFS) and migraine.

Compare that to the long roll call of apparently inflamed brain areas in Gulf War Syndrome: the precuneus, prefrontal cortex, the primary motor and somatosensory areas, and the basal ganglia, as well as underlying white matter.

FM is common in migraine as well, and Loggia’s migraine study also found evidence of widespread neuroinflammation (thalamus and primary/secondary somatosensory, insular cortex, visual cortex, basal ganglia) with quite an overlap with both FM and GWI. 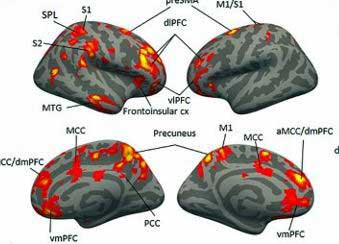 Another view of the brain showing widespread neuroinflammation in GWI compared to controls.

Loggia came to GWI through FM. It was only after finding neuroinflammation in FM that he decided to take on GWI. A bit obssessed with neuroinflammation, Loggia’s found it in chronic pain, depression, anxiety, autism, amyotrophic lateral sclerosis (ALS), multiple sclerosis (MS), Huntington’s disease, migraine, and now GWI.

With several studies that have used different  methods to find evidence of neuroinflammation in fibromyalgia, that finding is getting pretty robust.

It’s hard to imagine that Loggia is not right about inflamed brains causing problems. The FM, GWI and ME/CFS studies, after all, found no evidence at all of neuroinflammation in the healthy controls. It’s only showing up in people with diseases, and right now with the widespread neuroinflammation findings, people with GWI, FM, ME/CFS and migraine are sticking out like a sore thumb.

With improved scans the field seems to be booming: neuroinflammation has only shown up in PET scans in FM, GWI and migraine in the last year (thank you very much Mr. Loggia),

Neuroinflammation is a known factor in epilepsy, for instance. A 2019 Nature review targeted four potential neuroinflammatory pathways to attack (IL-1 TLR-4 axis, arachidonic acid–prostaglandin cascade, oxidative stress and transforming growth factor-β) at least three of which have been discussed in ME/CFS or FM. Neuroinflammation has become a major field in Alzheimer’s research as well.  The need to develop effective anti-inflammatories for the brain is clearer than ever, and with ME/CFS, FM and GWI joining the neuroinflammatory disease clique, hopefully they will benefit as well.

For More on Neuroinflammation in Fibromyalgia: