Could Fibromyalgia Patients Linalool Their Pain Away (Someday)?

This is the second in a series of short blogs on possible future treatments for fibromyalgia.

The smell of mint is uplifting, basil is stimulating, and lavender is known for its calming properties. What do all these plants have in common? They all come from the Lamiaceae or mint family – and they, as well as black tea and citrus fruits, all feature a substance with the whacky name of linalool.

In fact, over two hundred plants contain appreciable amounts of linalool. If you’ve ever smelled the pungent scent of fresh bay leaves from California Bay Laurel (also referred to as pepperwood, spicebush, cinnamon bush, peppernut tree, headache tree, mountain laurel, and balm of heaven (!) ), you’ve been inhaling linalool. The cinnamon on your cinnamon toast contains it. 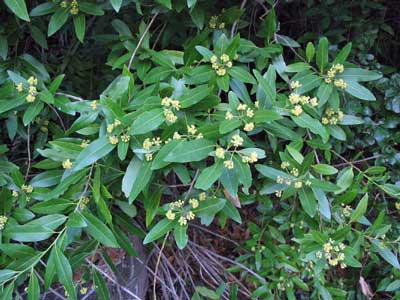 The Bay Laurel tree leaves have a pungent odor that leaves ordinary bay leaves in the dust.

Plants with this substance have been used through the ages to support health. Bay Laurel tree (Umbellularia californica) were used to treat rheumatism and neuralgias. Tea leaves treated stomach aches, colds and sore throats. They treated headaches by placing a single leaf in the nostril. It is powerful stuff.

Cannabis is another linalool-containing plant. Besides THC and CBD, Cannabis contains one hundred and eighteen other phytocannabinoids and 700 other chemicals (!). Of these, about 50 are present in significant amounts, and linalool is one of them. Some Cannabis users claim linalool strains such as Bubba Kush have calming, anxiety-reducing, sleep and possibly-immune enhancing effects.

Linalool has been reported in the scientific literature to have anticonvulsant, anti-inflammatory, antidepressant, antioxidant, antibacterial, antimicrobial, neuroprotective and even anti-tumor effects. It also may have anti-hyperalgesic effects: i.e. it be able to reduce pain – and that brings us to fibromyalgia (FM).

A 2014 Brazilian study, “Linalool and linalool complexed in β-cyclodextrin produce anti-hyperalgesic activity and increase Fos protein expression in animal model for fibromyalgia“, found that a linalool complex was perking up the descending inhibitory pain pathways that are inhibited in FM. (The ascending pain stimulating pathways are upregulated, and the descending downregulated pain pathways are inhibited in FM.)

Other studies suggest that plants like lavender and rosemary both (high in linalool) may be exerting their calming effects through the modulation of T-type calcium channels (TTCCs) involved in neuronal excitability, neuroprotection, sensory processes and sleep.

That’s all good stuff – but there’s a problem. Linalool (and other monoterpenes) are highly volatile (escape into the air quickly), are not very soluble in water, and, worst of all, have low bioavailability; i.e. it takes large quantities of them to have an effect.

There’s a possible fix though – embed the linalool in nanoparticles called polymeric nanocapsules – and you should be able to increase their stability and bioavailability. These nanocapsules contain an oil-filled cavity circled by a narrow polymeric envelope.

We saw in the intranasal blog that nanoparticles are also being used to package intranasal compounds. They’re basically a more sophisticated drug delivery system which promises to expand the treatment options available and deliver more effective treatments as well. 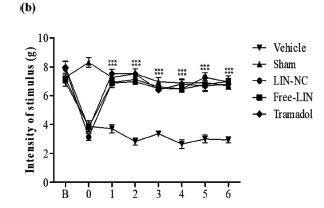 The bottom line refers to the linalool-treated mice. Tramadol was no help!

Linalool was known for its healthful effects, but no one had tried to embed it in nanoparticles until this Brazilian team did. First they got the substance in them, then they did all sorts of sophisticated measurements (laser diffractometry, high-performance liquid chromatography, electron microscopy) to determine if the linalool nanoparticles were stable and effective. They were. They found that volatility was significantly reduced and the particles were stable.

The fact that the nanoparticles released linalool over an extended period of time also potentially meant more pain-free time. In short, the animal trial was a success.

Human trials may be another matter – you never know – but while mint can be uplifting, and lavender seems calming, and while you can apparently use bay laurel leaves to cure (or cause?) a headache, it’s possible that future nanoparticle-based formulations of linalool (or other substances) may potentially get at the really tough stuff – the pain found in fibromyalgia.

Check out the first blog in the series.