Anyone who’s been around the scientific literature on chronic fatigue syndrome (ME/CFS) knows that dysautonomia – a dysregulation of the autonomic nervous system – is common. Two different kinds of orthostatic intolerance – postural orthostatic tachycardia syndrome (POTS) and neurally mediated hypotension (NMH) have been found. Virtually everyone with ME/CFS has reduced blood flows to the brain, and low heart rate variability is ubiquitous as well.

If long COVID is anything like ME/CFS, then dysautonomia is going to show up in the medical literature – and it’s starting to. Recent long-COVID studies are starting to validate the dysautonomia link, and as they do that, they’re validating the connection between long COVID and ME/CFS. Because they’re coming from around the world, they also open the possibility – so long as ME/CFS and long COVID are firmly linked – of creating a new global understanding of ME/CFS.

A recent Indian/French study is a good example. I can’t remember the last Indian or French study on ME/CFS, but this long COVID study found evidence of small fiber neuropathy (SFN) in about 25% of long-Covid patients. Because the study measured just one possible facet of SFN (sudomotor dysfunction), it’s possible that even more people had SFN. It stated, interestingly, that infections such as mumps, HIV, Hepatitis C, Epstein-Barr, and Coxsackie B often produce dysautonomia (who knew?). Interestingly, people who had been treated at home instead of the hospital (i.e. had a less severe illness) were more likely to show evidence of SFN.

The only real disappointment from the study was that it neglected to mention fibromyalgia (!).

Last month, in “Autonomic dysfunction in ‘long COVID’: rationale, physiology and management strategies“, Hammersmith and Imperial College researchers in London raised the specter of widespread dysautonomia – a subject one suspects many doctors have little knowledge of.

ME/CFS was not mentioned but postural orthostatic tachycardia syndrome (POTS), of course, were. The authors reviewed symptoms, tests and drug and other treatments that might be helpful and told doctors to be on the lookout.

“We suggest that all physicians should be equipped to recognize such cases, appreciate the symptom burden and provide supportive management.”

They also posited a cause that was right up POTS and ME/CFS’s alley – an autoimmune-induced hurt to the autonomic nervous system. This idea will hopefully be fully explored in the long-COVID studies.

“We posit that this condition may be related to a virus- or immune-mediated disruption of the autonomic nervous system resulting in orthostatic intolerance syndromes. ….we speculate that there is an underlying autoimmune component to the post-COVID syndromes that we report.”

Next, in a letter to the editor, “COVID-19, fatigue, and dysautonomia“, a Singapore researcher reported increased fatigue was found in 50% of recovered COVID-19 patients after 6 months – a fatigue that he believed was likely due to autonomic dysfunction and problems with the neuro-cardiac axis. 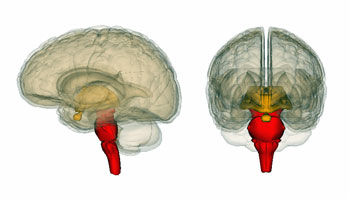 But why are these autonomic nervous system problems occurring? One answer might lie in the brainstem. The brainstem is the first recipient of all the sensory and “motor” signals from the spinal cord. It regulates very basic functions – like breathing, heart rate, blood pressure, digestion, alertness, sleep/wake – a lot of which has gone wrong in chronic fatigue syndrome (ME/CFS).

In “The Vagal Autonomic Pathway of COVID-19 at the Crossroad of Alzheimer’s Disease and Aging: A Review of Knowledge“, French researchers report that the SARS-CoV-2 coronavirus has a predilection for nestling itself within the vagus nerve. They propose that a failure of the vagus nerve to institute an anti-inflammatory response may lay behind the oft-noted cytokine storm that can accompany COVID-19. (Could an inhibited ant-inflammatory response also explain why people with more severe symptoms are more likely to come down with ME/CFS in the wake of an infection?)

From there, it moves into the dorsal vagal center of the brainstem – an “integrative center” which regulates both respiration and inflammation. Mice experiments indicate that past SARS viruses have a propensity to attach to the brainstem. Plus, the brainstem has high levels of the ACE2 receptor that the virus binds to.

When the virus gets to this part of the brainstem, they believe it begins affecting the “autonomic nervous centers” that regulate breathing and other cardiovascular factors. A recent paper, “Computing the Effects of SARS-CoV-2 on Respiration Regulatory Mechanisms in COVID-19“, stated that “overwhelming evidence” linked acute respiratory failure in COVID-19 to viral entry into the brainstem. The virus produces a “neurogenic switch” which causes, among other things, hypoventilation – which has been found in abundance in ME/CFS.

Another potential consequence involves increased sympathetic (“fight or flight”) and decreased parasympathetic (“rest and digest”) tone – exactly what is found in ME/CFS and fibromyalgia (FM).

The brainstem popped up again this month in “Persistent Brainstem Dysfunction in Long-COVID: A Hypothesis“, by Shin Jie Yong, a Malaysian researcher. Yong noted that most explanations for long COVID involve some sort of tissue damage, persistence of the virus, and chronic, unresolved inflammation, but none of those, he thinks are correct. The problem, Yong proposes, is “persistent, low-grade brainstem dysfunction” driven by a virus which loves to inhabit the brainstem.

Avindra Nath found numerous small blood vessel bleeds in the brainstems of the COVID patients he autopsied. Interestingly, most apparently initially had a mild illness presentation.

Since the brainstem is an important source of serotonin, norepinephrine and dopamine producing neurons, it could produce a vast array of symptoms including fatigue, pain, headache, depression, anxiety, sleep and cognitive impairments.

Yong believes damage to the brainstem could also be responsible for the gastrointestinal symptoms (vomiting, diarrhea, and abdominal pain) seen in long COVID. The ventral tegmental area and substantia nigra also reside in the brainstem’s midbrain, which supplies dopaminergic neurons to the higher brain regions.

Then comes the clincher. After noting that brainstem damage has been found in migraine, Yong writes:

As Yong noted, there are papers by Barnden in Australia that have been painstakingly showing that the brainstem is affected in ME/CFS. Jeff and Jen Brea’s craniocervical stories demonstrate that a damaged brainstem can produce all the symptoms of ME/CFS. The French researchers believe this organ is at particularly high risk in a coronavirus infection.

ACE2 presents another intriguing possible connection between ME/CFS and the coronavirus. As was noted, the virus binds to the ACE2 receptor, and the ACE2 protein is densely found in the brainstem (and the amygdala). The first thing that happens once the virus gets into the dorsal vagal nerve is that ACE2 levels drop, Ang II levels rise, the anti-inflammatory component of the renin-aldosterone-angiotensin (RAS) Ang (1-7), declines, and problems with baroreflex sensitivity occur.

Compare that to what appears to be happening in ME/CFS. The ACE2 inhibition found in ME/CFS also appears to result in high levels of Ang II and low levels of the anti-inflammatory Ang (1-7). The high Ang II levels in ME/CFS could be contributing to a host of problems including a ramped-up fight/flight system, narrowed blood vessels, inflammation, heart rate and blood pressure issues, and possibly reduced blood flows to the brain.

Hypoventilation and ventilation problems during exertion, in particular, and shortness of breath have been found in ME/CFS. Low CO2 levels may be common. Time will tell if the many respiratory problems found in COVID-19 are cousins to those found in ME/CFS.  Given what we know so far, it would be very interesting to see what happens when people with long COVID are put on an exercise bike. Avindra Nath reportedly is going to do just that.

It’s nice to see so many possible fruitful connections pop up between chronic fatigue syndrome and long COVID. It’s good, as well, to see long-COVID researchers heading to the autonomic nervous system, the brainstem and the renin-angiotensin-aldosterone – three areas one suspects not many doctors and researchers are all that aware of.

It would also make sense that the brainstem might have been missed in ME/CFS and other diseases. VanElzakker has pointed out that most brain imaging studies don’t produce a clear picture of the bottom of the brain. With the massive funding long COVID is about to get, though, hopefully the brainstem and the autonomic nervous system will get their shot. It would be shocking if the potential autoimmunity issue wasn’t fully addressed as well. The presences of small fiber neuropathy adds another intriguing factor.

Are the stars lining up? Time will tell. Note that if these findings are validated in long-COVID studies, they all showed up first in ME/CFS and fibromyalgia.