The first of two of three blogs exploring the renin-angiotensin-aldosterone system in ME/CFS and COVID-19. Warning – this blog is complex…

Back in 1997, they had a couple of important things right – orthostatic intolerance (OI) is basically caused by not getting enough blood to the brain when one stands (or sits). Even back then, researchers knew that problem could be caused in different ways. Blood pooling in the lower body upon standing – probably because of damaged autonomic nerves – was one. Low blood volume (@75% of normal) was another factor making it difficult to get blood to the brain upon standing.

The 1997 paper, “Hypovolemia in Syncope and Orthostatic Intolerance Role of the Renin-Angiotensin System“, brought a big surprise, though. Not only did they find markedly low blood volume – in some cases 1,000 ml low (about the size of a large Coke bottle) – but they found low plasma renin activity as well – and that didn’t make sense. 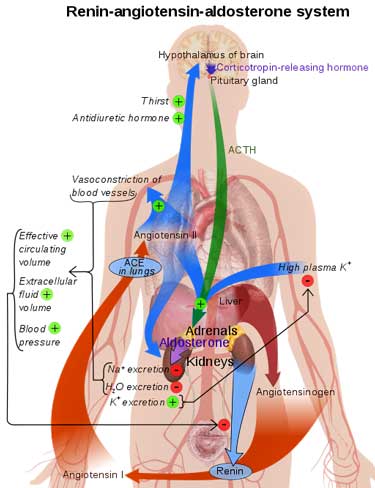 The renin-angiotensin-aldosterone system that regulates blood volume presents a paradox in ME/CFS and FM.

Renin is the first leg of the renin-angiotensin-aldosterone system (RAAS) that’s designed to deliver optimal blood volume levels. If blood volume is low, renin activity should be high.

Given the “profound” low blood volume found, both renin and aldosterone levels should have been dramatically increased, but the opposite was happening; they were both decreased in postural orthostatic tachycardia syndrome (POTS). With that, the “renin-aldosterone paradox” had been born.

The authors believed that reduced angiotensin levels were probably responsible, but also suggested the damaged autonomic nerves in the kidney could be a factor.

More surprises were in store.

In a 2006 paper, Stewart and Medow found that low blood volume was not universal at all in POTS. It was decreased in patients they called low-flow POTS, but not in two other subgroups. 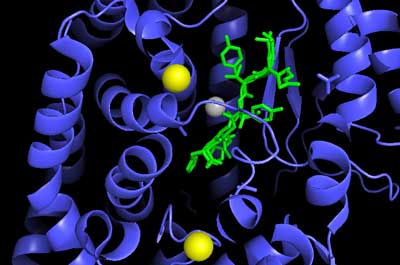 Angiotensin enzyme in conjunction with angiotensin. Very high levels of Ang II may be wreaking havoc in POTS and ME/CFS

The big news, though, was that instead of having low Ang II levels, the low blood volume and low-flow POTS patients had dramatically increased Ang II levels (2-3 times normal), as well as low renin levels.

Angiotensin II does more than increase blood volume. At high levels it can have some decidedly negative effects. Ang II ramps up vasoconstriction (narrowing) in the blood vessels by prompting the release of norepinephrine from the sympathetic nerves. It also jacks up oxidative stress levels through the formation of the superoxide radical and ultimately peroxynitrite. Increased peroxynitrite, then, can reduce the levels of nitric oxide – an important vasodilator.

High Ang II levels potentially set the stage for a ramped up fight/flight system, narrowed blood vessels, inflammation and possibly reduced blood flows to the brain. Since Ang II acts like a neurotransmitter in the brain, it could have multiple effects there as well.

High Ang II levels also appear to be responsible for the defects in the vasodilation in the small blood vessels in the skin, which sometimes cause acrocyanosis (bluish color) in the hands and feet.

There was another twist as well. With all that sympathetic nervous system activity going on, the low blood volume POTS patients should have high blood pressure – instead, they often have the opposite.

Five years later, a deeper dive into the renin-aldosterone paradox produced more answers – and more questions. In “Abnormalities of Angiotensin Regulation in Postural Tachycardia Syndrome“, Vanderbilt researchers suggested they’d found a reason for the high Ang II levels – reduced activity of the angiotensin converting enzyme 2 (ACE-2) that breaks down angiotensin. That was a timely finding as the ACE-2 enzyme had only been discovered seven years earlier. 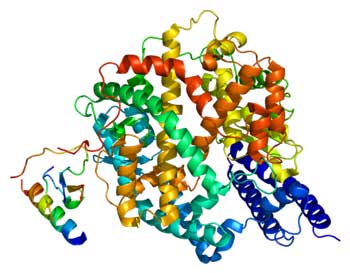 ACE-2 has been referred to as the “protective arm of the renin-angiotensin system“. It breaks down angiotensin to angiotensin (1-9) and angiotensin II into angiotensin (1-7). Basically, it protects against high Ang II levels being present. Plus, in contrast to Ang II, ACE-2’s end product, angiotensin (1-7), opens up the blood vessels (i.e. is a vasodilator). The low levels of Ang (1-7) found in this study suggested that ACE-2 enzyme activity was low.

Note that ACE-2 also cleaves or breaks up other peptides including bradykinin.

The Vanderbilt researchers didn’t waste any time. The very next year, in Altered Systemic Hemodynamic & Baroreflex Response to Angiotensin II in Postural Tachycardia Syndrome, they investigated the impact of high Ang II levels in POTS patients.

That suggested that Ang II receptors lining the smooth muscles of the blood vessels were simply not responding well in POTS and that the desensitization hypothesis might be correct.

Interestingly, the study found that Ang II was, on the other hand, doing its job of retaining sodium. That indicated that problems with sodium retention were not causing the low blood volume seen in many POTS patients.

Then they found another possible high Ang II-related problem – a balky baroreflex sensitivity response. The baroreflex response refers to the rapid changes seen in heart beat intervals when blood pressure changes. The heart should, in a matter of seconds, alter its beat in response to any changes in blood pressure. The diminished baroreflex sensitivity seen in the POTS patients was strongly correlated with increased Ang II levels. Since the baroreflex response impacts the heart rate, the researchers proposed that high Ang II levels likely contributed to the excessively high heart rate seen in POTS during resting and standing.

The findings suggested that the Ang II levels were having various effects: blood pressure was not being regulated normally, and the heart rate appeared to be affected. Sodium retention, though, was fine.

The cause of the ACE-2 inhibition – the putative cause of the high Ang II levels – was unclear. The authors speculated that genetic mutations might play a role, but then introduced a strange possibility: they might not be measuring Ang II at all; but might be measuring Ang 3 or 4. Perhaps Ang II levels were normal, but Ang III or IV levels were increased.

(Miwa also found that providing desmopressin, an antidiuretic which reduces the amount of water excreted in the urine, eliminated orthostatic intolerance during a standing test, and improved stroke volume (amount of blood pumped by the heart), and significantly improved daily living scores in 5/10 patients with low “urinary osmotic pressures” in the study.)

Treatments for the Impaired Renin-Angiotensin-Aldosterone System seen in ME/CFS and POTS.

Treatments help some and not others, and can come with side effects. Remarkably few studies have been done given how often some of the drugs are used in POTS. Possible treatments include:

At this point, much remains unclear.

It’s clear the renin-angiotensin-aldosterone system (RAAS) that regulates blood volume is messed up in ME/CFS and POTS, and is likely causing the low blood volume there.

Low, instead of high, plasma renin and aldosterone levels in the face of the low blood volume found has led researchers to term this situation “the renin-aldosterone” paradox in POTS and ME/CFS.

Two studies suggest that the activity of the ACE-2 enzyme is reduced (but it’s possible that Ang II levels are not being accurately assessed.) It’s not clear why ACE-2 activity is reduced, but genetic issues or low blood volume could account for it.

Drugs and other treatments can help some people with the renin-aldosterone paradox, but can come with side effects.

*Please note that other kinds of POTS exist which do not produce low blood volume or problems with RAA system. 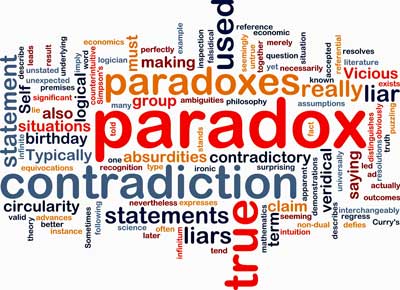 Why the focus now on the agonizingly complex renin-angiotensin-aldosterone system in ME/CFS and POTS? A system that has unresolved problems and no answers?

This is a setup blog to prepare for the next blog or two. Those blogs will cover an intriguing possible connection that’s shown up between ME/CFS and COVID-19 which features the same renin-angiotensin-aldosterone system this blog focused on.

A lot of thought is now being aimed at RAA system, and in particular, a “messenger” called bradykinin. Bradykinin, to my knowledge, has never been thought to be a major player in ME/CFS – that is, until 2018, when Wirth and Scheibenbogen pegged it as a possible major player in ME/CFS. Could COVID-19 already be informing us about what’s happening in ME/CFS and POTS? Time will tell.

Coming up next: RAS and Bradykinin – Where COVID-19 and Chronic Fatigue Syndrome (ME/CFS) Meet?

RAS and Bradykinin: Where COVID-19 and ME/CFS Meet?