Two New Zealanders combine neuroinflammation with the HPA axis to produce a unique explanation for ME/CFS and FM.

Neuroinflammation, the hypothalamus and a unifying hypothesis

The HPA’s nexus in two important systems – the stress response and the immune system, both of which almost everyone believes are impaired in ME/CFS – make it an obvious choice for study. The Mackay-Tate hypothesis, though, is unique in that it focuses on a dysfunction in one particular part of one part of the HPA axis – the paraventricular nucleus, in the hypothalamus. It also, notably, links problems in the HPA axis with one of the hottest topics in ME/CFS – neuroinflammation.

They believe their hypothesis could account for just about everything that happens in these diseases.

The heart of the neuroinflammatory matter in ME/CFS, they believe, is the limbic system – a primordial part of the brain packed between the brainstem and upper parts of the brain. Its name refers to the fact that it’s located at the limbus (the border) of the brain.

In 2011, Mackay joined Professor Warren Tate’s laboratory in the biochemistry department of the University of Otago, Dunedin, New Zealand. New Zealand is a small country – less than 5 million people – but it’s used to punching above its weight. It’s got the best rugby team in the world, and appears to have actually eliminated the COVID-19 virus. On the ME/CFS side, it’s got Warren Tate, Rosamund Vallings, has been publishing exercise studies, and now here comes Angus Mackay.

Angus Mackay, the lead author of their paper, came down with ME/CFS 15 years ago during a bout with glandular fever (infectious mononucleosis) while teaching. Mackay, an ex-British army officer, rugby coach and outdoor expedition leader – provides yet another example that this disease can fell the most rugged among us.  His disease has waxed and waned ever since then. 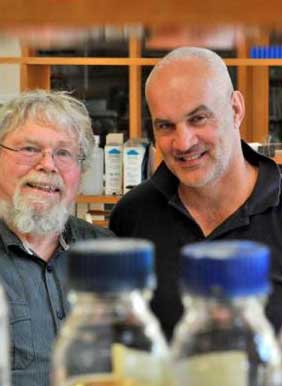 Mackay took his 1st Class Honors degree in Biochemistry from the University of Dundee, Scotland, and his intuitive understanding of ME/CFS, and teamed up with Tate, recipient of New Zealand’s highest award in science – the Rutherford Medal (2011) – to explore ME/CFS.

With the assistance and mentoring of Tate, Mackay molded his “de novo” ideas into a journal publication in 2018. A year later, Mackay published his neuroinflammatory model of ME/CFS in a New Zealand medical journal.

Mackay used his own symptoms to guide his inquiry. While in a PHD program examining a possible viral cause of ME/CFS, Mackay asked himself what could be causing his own voluminous array of symptoms (aching eyes, temples and spine, “brain fog” (concentration, decision-making and memory problems), lack of coordination, anxiety, depression and withdrawal, debilitating fatigue by day, insomnia at night, temperature regulation and gut problems).

The key organ embedded within the limbic system for ME/CFS may be the hypothalamus (Fig 1). This small – about the size of an almond – but vital organ links the nervous system to the endocrine system, and regulates both the HPA-axis and the autonomic nervous system. It controls body temperature, fatigue, sleep, and circadian rhythms among others.

That means that a lack of refreshing sleep, insomnia, difficulty tolerating temperatures, low cortisol, low blood pressure and heart rate, low blood volume, and gut issues such as bloating could all conceivably be linked to an inflamed hypothalamus. 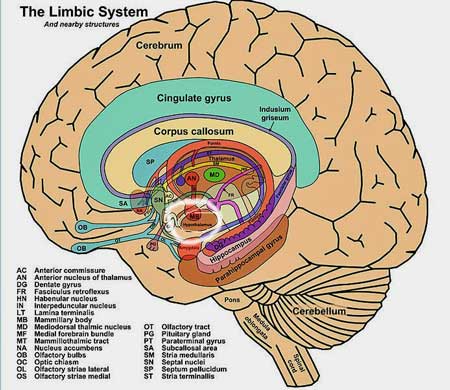 One may not need the entire hypothalamus, though, to cause ME/CFS. Mackay’s inquiry lead him to suspect one small part of an already small organ – the paraventricular nucleus (PVN) of the hypothalamus.

Every shock to the system – physiological or emotional – first gets funneled into the PVN, which then integrates the incoming data, decides what to do with it, and then tells the autonomic nervous system and HPA axis how to respond. That makes the PVN a prime target in a disease characterized by a low tolerance to just about any stress (Fig 2).

Talk about walking the knife’s edge. Just about any type of physical or mental exertion or emotional stressor seems to have the potential to produce an effect in ME/CFS. The fact a ludicrously small action – a short walk, mental work, a chemical odor, an emotional stress, or an unusually innocuous supplement or drug – can have a negative effect surely suggests that some part of the stress response system has gone haywire.

“… when a certain threshold for incoming stress signals is exceeded, might that trigger a flare-up originating in the hypothalamus but spreading out like a tidal wave to specific targets within the brain and central nervous system?” Angus Mackay

Mackay and Tate propose that exceeding a stress “tolerance level” causes the PVN in the hypothalamus of ME/CFS patients to go a bit nuts in an attempt to defend itself. Alarmed (possibly by alarmins from damaged mitochondria) it calls in the big immune guns of the brain – the glial cells (both microglia and astrocyte) – which jump into action producing pro-inflammatory cytokines.

If an invader was there, that would have been one thing – it would have been vanquished – but Mackay doesn’t need a pathogen to explain a whacky PVN. He just needs a system that’s gone seriously off track. He believes that the PVN might just be the vulnerable point in the ME/CFS armory.

Every time the PVN takes a hit, an already upregulated stress response system gets a bit touchier. Symptoms wax and wane as the neuroinflammation increases and then dies down. Higher amounts of neuroinflammation, though, and the touchier PVN that comes with that – will require longer reset periods.

Mackay believes his model is truly unifying because it can account for the diverse range of triggers. There’s no need for “subsets” – there’s just a touchy PVN that’s reacting in slightly different ways. Indeed, Mackay views ME/CFS (along with fibromyalgia) as a “spectrum disorder”. He believes the wide range of symptoms and the characteristic relapses seen in ME/CFS and fibromyalgia could be accounted for by his simple neuroinflammatory model.

The Hunt for Neuroinflammation in ME/CFS and Fibromyalgia

While signs of inflammation can be found in the blood or periphery, Mackay is more interested in inflammation in the brain. While neuroinflammation studies are much rarer than blood studies in ME/CFS, the findings have generally been more consistent. 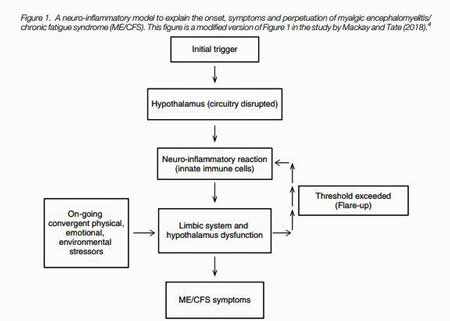 This field is still too underfunded, unfortunately, to follow up even on potentially fundamentally important findings in a reasonable timespan.

Mackay and Tate called for more of a focus on understanding the “neurological pathophysiology” of ME/CFS and they’re not alone.  Maes and Chaves-Filho recently postulated that microglial initiated neuroinflammation is at work in ME/CFS. Van Elzakker’s critical review asserted that the inflammation in ME/CFS is best studied in the brain, and Komaroff proposed inflammation was behind the neurologic issues in ME/CFS. Other prominent backers of a “neuroinflammatory concept” for ME/CFS include Drs. Shepherd, Bateman, and Ron Tomkins of the Harvard ME/CFS Collaborative Center. (Dr. Bateman proposed inflammation in the hypothalamus is key in ME/CFS).

Given Mackay’s interest in neuroinflammation, I asked him about the long wait to replicate the Watanabe paper. Mackay reported he’s been in regular contact with Watanabe, and that Watanabe has reported that not only will his larger cohort repeat study be published later this year, but that – working with the Karolina Institute – his earlier (2014) findings had been validated. (To Mackay’s delight, Watanabe also stated that inflammation in the hypothalamus had been detected.)

Mackay was probably not surprised. He’s been waiting for the neuroinflammatory face of ME/CFS to show itself for almost a decade. Both he and Tate believe that ME/CFS may be more akin to diseases like MS, Parkinson’s disease and Alzheimer’s than we know.

“There is evidence for a remarkable convergence in the mechanisms responsible for the … amplification of inflammatory processes that result in the production of neurotoxic mediators” in these diseases: i.e. a common neuroinflammatory pathway exists.

The common link is neuroinflammation with different ‘in situ’ drivers (amyloid plaques in the case of Alzheimer’s) determining what the final disease state is. The “driver” – the neurological factor which drives the process in ME/CFS and FM – is unclear, but the potentially good news for ME/CFS is that contrary to other neurodegenerative diseases, the absence of overt nerve damage means it might be possible to reverse it completely.

There’s more good news. The authors pointed out that brain imaging techniques are improving rapidly. It was that improvement, in fact, which enabled researchers to first find evidence of neuroinflammation (in the absence of neurodegeneration) in ME/CFS. 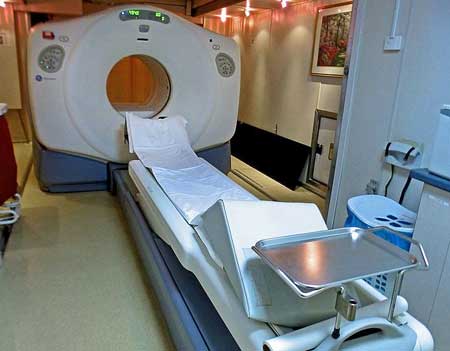 Mackay believes better PET/MRI scanning techniques – including those used in the upcoming Watanabe paper- plus more funding, a critical need, could produce a diagnosable brain signature for ME/CFS/FM.

Mackay said he expected that the upcoming Watanabe ME/CFS study would feature more advanced PET/MRI techniques and more reliable and accurate results. The rapid growth of technology in this area and ‘the race’ to produce the best brain signatures for various diseases would, he thought, “clearly benefit ME/CFS and fibromyalgia research” as these techniques are being constantly improved, fine-tuned and refined (allowing even lower levels of neuroinflammation to be detected).

He ultimately envisions a quick diagnostic brain scan test may be available.

Meanwhile, the MERUK (ME Research UK)-funded Jarred Younger study that’s looking for immune infiltrates that could be producing inflammation in ME/CFS patients’ brains could be a game-changer.

The paper didn’t refer to treatments, but the intranasals are one possibility. Jarred Younger, in particular, has been exploring treatments to turn down neuroinflammation using botanicals and drugs.

Dr. Klimas, interestingly enough, is doing clinical trials in Gulf War Illness and ME/CFS that aim to both reduce neuroinflammation (with etanercept) and reset the HPA axis (mifepristone). She will also be pairing an antioxidant with intranasal insulin in GWI.

Check out a long list of possible drugs and other substances including new drugs that are under development in Microglial Inhibiting Drugs, Supplements and Botanicals to Combat Neuroinflammation.

Your Support Makes These Reviews Possible