The exercise physiologists at the Workwell Foundation are pretty darn good at providing thought provoking case reports. A couple of years ago, a Workwell case report indicated that a very ill ME/CFS patient was able, using Workwell’s heart rate-based exercise program, to not just halt the steady decline in her health but improve it – an improvement which even showed up in her cardiopulmonary test results. She was not well – she had not fixed her energy production problems – but she was much stronger and the results showed that.

Saline has been used for years to increase blood volume and ameliorate crashes in ME/CFS. Since anesthesia is known to reduce blood volume, Pat, for instance, provided a letter from her doctor prior to her surgery asking that she be given saline before and after surgery.

“She has a chronic low blood volume state, the severity is well predicted by her baseline pulse. She will be more hemodynamically stable with at least one liter of normal saline on board pre-op, and the line continued for 24 hours post-op to allow additional fluids, continuing fluids at 100 to 150 cc/hour to allow an additional 2 liters post-op. She should then push fluids with electrolytes for 3-4 days to improve her recovery rate.”

She didn’t experience a relapse from any of the three surgeries she ultimately went through. I know of another person whose severe post-surgical relapse was resolved after she received saline infusions.

In their most recent case report Workwell assessed the effects of saline in a person with ME/CFS over almost two years. With the two-day cardiopulmonary exercise tests (CPETs) the folks at Workwell give for disability and research, they’re well aware of the help that saline infusions can give.

We know that low blood volume is common in ME/CFS – Hurwitz documented that over a decade ago – and is found in postural orthostatic tachycardia syndrome (POTS) as well. Since then, the evidence for it has only grown. The reduced preload, or reduced blood flows to the heart, and the microcirculatory problems Systrom found, are both suggestive of low blood volume. The reduced stroke volume sometimes seen in ME/CFS could, in part, be due to low blood volume.

Low blood volume isn’t the answer to ME/CFS – there’s more to the disease than that, but it does play a part. Getting blood up into your brain isn’t made any easier by not having enough blood to start with. 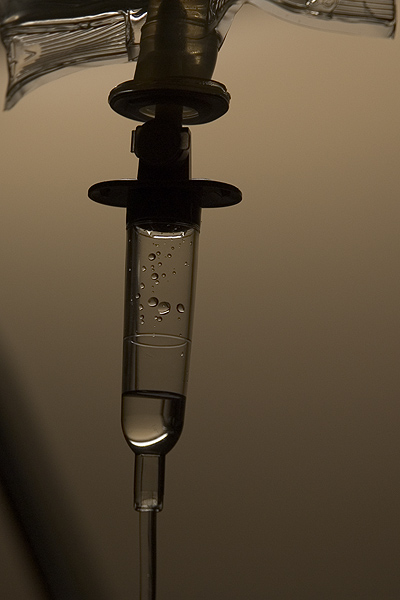 Saline has been used for years to increase blood volume and ameliorate crashes in ME/CFS. Workwell assessed the effects of saline in a person with ME/CFS over almost two years.

Saline infusions which increase blood volume have long been used to ameliorate crashes in people with ME/CFS.  But what about using saline regularly? Could that help?

Workwell went to work with a perfect subject – a 38-year-old woman with a classic post-infectious onset: she came down with chronic fatigue syndrome (ME/CFS) after a bout of infectious mononucleosis when she was 21. At the time, she was a full-time college student and intercollegiate basketball player, who reveled in physical exercise.

She had all the symptoms of ME/CFS, plus chronically low blood pressure (and did not appear to have POTS). Subsequently, she became unable to engage in sustained exercise and was unable to work.

Workwell’s testing revealed that the saline helped physiologically. Her peak VO2 levels – the maximum energy output she could muster during the exercise test – soared from 72% of normal to 98%. Her peak heart rate rose from 87% to 104%. Her systolic blood pressure – a major problem for her – rose 50% (115 mmHg to 174 mmHg); plus, she cut her recovery time from the exercise test from 5 to 2 days. By the time she stopped the saline, her heart rate and systolic blood pressure were continuing to improve.

A few other measurements hit a plateau earlier, and had declined a bit, but were still well above her baseline. As Workwell did not report improvements in her VO2 max or her time to enter anaerobic threshold, those aspects of exertion apparently did not improve. Still, her brain fog reduced steadily, and symptomatically, she was in her best shape at the end of the treatment period.

The results suggested that her lower blood pressure and her inability to reach peak heart may have largely been the result of her low blood volume. Increasing her blood volume allowed her heart to fill with more blood – thus improving stroke volume. The increased sodium load may have helped with exercise as well.

Workwell proposed that neuroinflammation-induced damage to the nervous system, which damaged the “central autonomic control structures”, could explain the low blood volume and orthostatic intolerance seen in ME/CFS.

While it didn’t cure her, saline, then, helped this patient quite a bit – as it has many people with ME/CFS/FM.

Despite the fact that saline is used regularly in ME/CFS, few studies have been done.  A 1997 study found that giving 1200 mg. sodium chloride daily for three weeks resolved the orthostatic hypotension (low blood pressure upon standing) in half of the ME/CFS patients tested. (Those who did not improve had low renin levels).

Similarly, Burklow, in a 1999 study, found that giving saline to adolescents who were prone to fainting allowed all of them to pass a 30 minute tilt table test (TTT) without fainting. Burklow believed the saline was improving autonomic nervous system functioning.

A 2017 study found that simply giving saline infusions (between 1.1 and 2.1 L) every 10 days or so for three to six months dramatically improved the symptoms of young women with postural orthostatic tachycardia (POTS – increased heart rate during standing).

Over 90% of the participants experienced significant improvement in symptoms lasting an average of three days post infusion. The average orthostatic hypotension score dropped in half (from 6.6 to 3.1). Dizziness symptom scores dropped from 7.2 to 2.8, fatigue scores from 8.2 to 4.3, weakness from 6.3 to 3.4. The patients’ ability to stand for a long time and walk for a short or long time about doubled. 50% of the participants reported no need for further infusions – except during times of stress – within three to six months of starting the intermittent infusions.

Those were remarkable findings given the patient population involved: every participant had tried and failed to improve on at least four drugs used in POTS.

Despite the blood volume depletion and several intriguing study results, saline IVs – even for temporary relief – aren’t  recommended or even discussed in several POTS journal  and web overviews.

Getting a venous line inserted and then getting saline regularly obviously isn’t an option for the vast majority of us. But what if there was another easier and cheaper way of increasing blood volume? Recent studies in ME/CFS and POTS suggest one particular oral rehydration solution may work very well.