At the 2020 IACFS/ME Zoom Conference, Marvin Medow spoke on a recent study, “The Benefits of Oral Rehydration on Orthostatic Intolerance in Children with Postural Tachycardia Syndrome“.

The study produced an unusual finding for this field – a potentially relatively cheap and easy source of help.

The study involved 10 patients with POTS and 15 healthy controls. Most of the POTS patients also met the criteria for chronic fatigue syndrome (ME/CFS).

Postural orthostatic tachycardia syndrome (POTS) refers to a condition which produces increased symptoms, racing heartbeat, reduced stroke volume and blood flows to the brain upon standing. Along with the low blood volume found in POTS, POTS patients have another problem – their blood tends to settle in their abdomen and lower body when they stand, reducing blood flows to their brains further. POTS is not uncommon in ME/CFS and can often be ameliorated by increasing blood volume.

Medow used  a lower body negative pressure (LBNP) technique to simulate a tilt table test (TTT) over three days. Air pressure was reduced until the participants were feeling faint, asked that the test be stopped, if their blood pressure fell too far, or if the test was concluded after 50 minutes. All the participants made it to a -45mm of air pressure for at least two minutes.

The participants were given the World Health Organization (WHO) oral rehydration solution (ORS) containing glucose (dextrose) (1 liter over 30 minutes) or a saline intravenous (IV) therapy for 30 minutes prior to the LBNP test.

At baseline – without being given saline IV’s or ORS – the POTS patients had 30% of the orthostatic tolerance of the healthy controls.

While studies indicate that saline IV’s are helpful in POTS, the big winner in the study was oral rehydration solution (ORS). Both saline IV’s and ORS were effective at maintaining blood press and both significantly improved orthostatic intolerance (as measured by the orthostatic index) – with the ORS being a bit more effective. 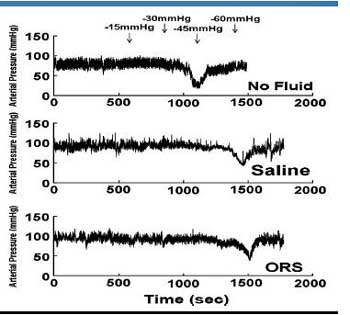 Studies indicate that saline IV’s help with POTS, and anecdotal reports of the help they provide to POTS and/or ME/CFS patients are common, but this small study suggests that oral rehydration solution (ORS) may be more effective. It was remarkable to see a relatively cheap and easily available ORS solution prove more effective in this study. The authors concluded that:

“Because ORS is inexpensive, safe, and easily administered, it may be considered an effective alternative to IV saline for rapid resolution of symptoms associated with orthostatic intolerance.”

Why might an ORS provide more benefits? While saline IV’s and ORS both increase blood volume, they do so in different ways. The authors suggested the ORS may be producing a “gastropressor effect or response”, which increased blood pressure, thus helping maintain blood flows to the brain.

The ORS Medow used derived from the World Health Organization formula and contained glucose (dextrose) – not sucrose.  Plus it’s vital that the ingredients be combined in the specific portions specified by the WHO.

The glucose/salt combination creates an osmotic gradient consistent which produces “nearly complete fluid and salt absorption via the intestinal Na+-glucose co-transport (GLUT2,symporter) carrier”. Sucrose, it should be noted, does not produce the same effect – many commercial oral rehydration or electrolyte enhancing solutions use sucrose. 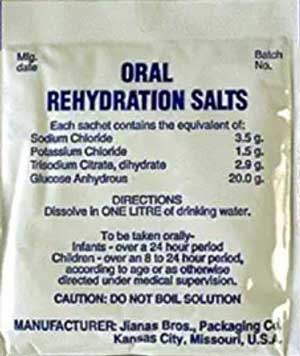 The oral rehydration salts from the Jianas Brothers are the cheapest option – if you buy directly from the company.

The ORS recipe Medow uses has proved lifesaving in cholera and other diseases that produce severe diarrhea. Medow recommended using Normalyte or an ORS solution from the Jianas Brothers. He cautioned against buying the Jianas product on Amazon as it is extremely expensive (almost $4/packet). Instead you can buy it direct from Jianas Brothers for 55 cents/packet (plus shipping). Trioral on Amazon also uses the WHO formula (86 centers/litre). I tried it and it works really well. It’s quite cheap when you buy several months supply.

Six packs of Normalyte (two packs per liter of water) cost $8.99 at Amazon. You can buy Normalyte Pure (without additives) in bulk at the Normalyte website (buy 10 and each pack costs $7.19)

David reports that in Canada MEC’s Adventure Medical Kit Oral Rehydration Solution  (3x 1litre solutions for $8.75CAD on mec.ca) a good option.  David states that MEC contains the original pure WHO formula with no additives and at a higher concentration than Normalcyte.  (The original recipe may have more glucose than the updated one.) If you spend over $50 shipping is free.

There is a potential catch – 20 grams of glucose per liter of water. One person in the question period asked if the amount of sugar (glucose) in the ORS solution could pose a problem for people with ME/CFS. Medow didn’t think this relatively small amount of glucose would affect glucose levels, but time will tell how well people with ME/CFS tolerate it.

ORS solution may not need to be taken every day, though, to have an effect. A 2017 study found that simply giving saline infusions (between 1.1 and 2.1 L) every 10 days or so for three to six months dramatically improved the symptoms of young women with postural orthostatic tachycardia (POTS – increased heart rate during standing).

Commercially available ORS contains sodium chloride (3.5 grams), potassium chloride (1.5 grams), trisodium citrate dihydrate (2.9 grams) and dextrose (20 grams), all of which is to be added to 1 liter of water.

It is possible to make the solution yourself. Doing so, however, come with a strong warning. Safe sources of dextrose and table salt are easily found. Because some of the other chemicals are used for industrial purposes and contain toxic elements, USP-grade/food grade sources MUST be used if you decide to create your own preparation.

That can be bit tricky. Amazon, for instance, sells potassium chloride that is not food grade. The product description states it’s  “used in fluxes, production of other chemicals, heat packs, along with a lot of other uses” – and people are using it as a dietary supplement. Amazon also sells a food-grade potassium chloride (in its industrial and scientific products section) which is actually substantially cheaper – which doesn’t really make sense. Food-grade sources of trisodium citrate dihydrate can be found as well.

All in all, given how sensitive people with ME/CFS are, it’s easier and probably much better to stick to the ORS packets – and use the Jianas ORS if money is an issue.

Many people try to increase their blood volume by adding salt to water. Drinking large amounts of salt water, however, can be dangerous – and Medow reported that “conventional oral hydration” techniques are not effective in improving orthostatic intolerance. Drinking a lot of salt water will cause the water to go into the tissues – not the circulation. Then the sodium has to be excreted – potentially causing declines in potassium.

Many other forms of ORS have been proposed. Dr. Cheney recommended his “Homebrew” formula, which uses no sugar, and a mixture of sea salt and No Salt (available at grocery stores) for those unable to tolerate Gookinaid – now called Vitalyte – which is glucose-based and contains fructose, potassium and sodium chloride, as well as some other factors.

This recipe uses water, salt and regular sugar. The Rehydrate website also recommends water, salt and table sugar. Hydrant – a fancy rehydration mix – uses sugar as well. – Medow would presumably not approve of any of these.

The World Health Organization’s glucose based oral rehydration solution is mostly used to prevent dehydration in cholera and severe diarrhea but it proved surprisingly effective at improving orthostatic intolerance in children with POTS – many of whom met the criteria for ME/CFS.

The ORS was used to increase the low blood volume in POTS. Blood volume is often low in ME/CFS as well. 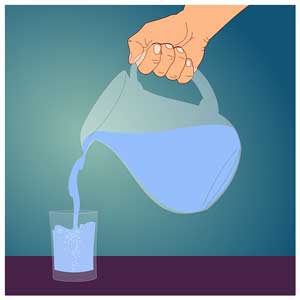 While both ORS and saline IV’s were effective at maintaining blood pressure, I liter of ORS was more effective at improving orthostatic intolerance (as measured by the orthostatic index). Only ORS normalized blood flows to the brain, increased cardiac output and mean arterial pressure in the POTS patients.

A recent study indicated that most people with ME/CFS, when they have POTS or orthostatic hypotension or not, have reduced blood flows to the brain.

The authors concluded that ORS is an inexpensive, safe, and “effective alternative to IV saline for rapid resolution of symptoms associated with orthostatic intolerance.”

The one possible catch for ME/CFS patients who are limiting carbohydrates is the amount of glucose contained in the preparation.

The WHO’s ORS solution is composed of glucose (dextrose) and salts. Medow recommended two commercial products: one produced by the Jianas Brothers and another called Normalyte. Several other commercial ORS solutions and recipes use sucrose – which is not effective.  Salt water is not very effective at improving orthostatic intolerance and drinking large amounts of it can be dangerous.

It is possible to make the preparation but because some of the factors in it are used for industrial purposes, food-grade sources must be used to avoid possible toxic exposures.