Study Finds ME/CFS Most Neglected Disease Relative To Its Needs

This is the third in a series of blogs on advocacy topics as we enter into the prime advocacy period of the year.

The stats are striking. A bit horrifying, to be sure – but certainly very striking.

We’re not talking about a sore throat here! Art Mirin, Mary Dimmock and Leonard Jason lay it out all so clearly in their 2020 blockbuster paper, “Research update: The relation between ME/CFS disease burden and research funding in the USA” . The study updates a 2016 piece which, for the first time, attempted to apply a crucial epidemiological statistic – disability adjusted life years (DALYs) – to ME/CFS.

DALYs were developed in the 1990s to get a more accurate measure of a disease’s true burden. Chris Murray’s commitment to use them to illuminate the true state of the world’s health led Bill Gates to fund the $125 million Institute for Health Metrics and Evaluation (IHME). Since then the IHME has become the most trusted institution regarding disease burden in the world.

Epic Measures: How One Man Changed the World (and Possibly Chronic Fatigue Syndrome and Fibromyalgia)

DALYs, then, are crucial statistics for any disease – and that hasn’t really sat well with an institution which doesn’t consider disease burden at all when giving out funding.  A 2011 study suggested that only a third of the National Institute of Health’s (NIH’s) funding could be accounted for by assessing disease burden. Two thirds of it was being produced by something else.

By 2015, the NIH, which with its $43 billion/year budget, is easily the biggest medical research funder in the world – had gotten so hammered by questions about where its funding was going that it produced a report. The results were a mishmash. The NIH was pumping lots of money into some of society’s most destructive disorders and was missing the boat on others. In general, the results weren’t great or terrible – they were kind of in-between. 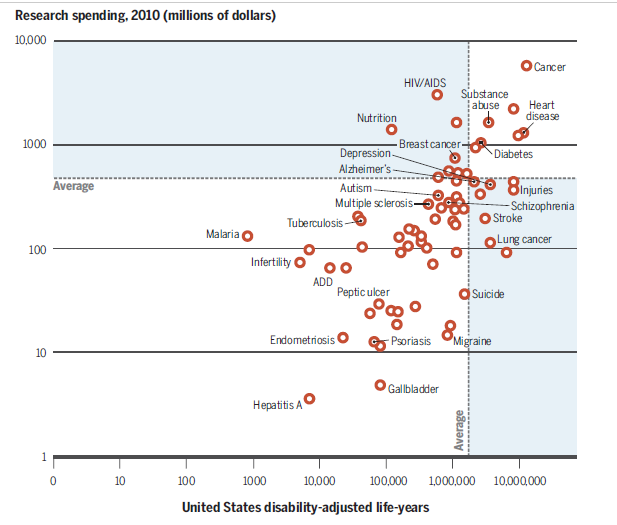 Some really ugly facts cropped up in those results. Emphysema, the third leading cause of death in the U.S., gets paltry funding compared to HIV/AIDS – which gets no less than 10% of the NIH’s entire research budget. Despite the fact that migraine actually poses more of a disease burden than HIV/AIDS in the U.S., it was getting more than a thousand times less funding.

Chronic fatigue syndrome (ME/CFS) was not included. This wasn’t the NIH’s fault, but it underscored – if it needed underscoring – just how penalized poorly studied diseases are – you can’t even get on the darn map. Just getting accurate DALYs for ME/CFS, however, required having epidemiological statistics that ME/CFS doesn’t have. As Mirin, Dimmock and Jason noted:

“The calculation of DALY for ME/CFS in this study is significantly limited by the lack of research and the poor quality of epidemiological studies assessing the natural progression of the disease, the prevalence of the disease overall and at different levels of severity, the corresponding levels of disability, and the magnitude and timing of premature death due to the disease and its complications.”

Still, you do what you can, and the Mirin-Dimmock-Jason 2020 update, “Research update: The relation between ME/CFS disease burden and research funding in the USA, of their 2016 study suggested that ME/CFS would have stuck out like a sore thumb. In it, the authors did a very clever thing: if the NIH didn’t include ME/CFS in their funding and disease burden assessment, they would. 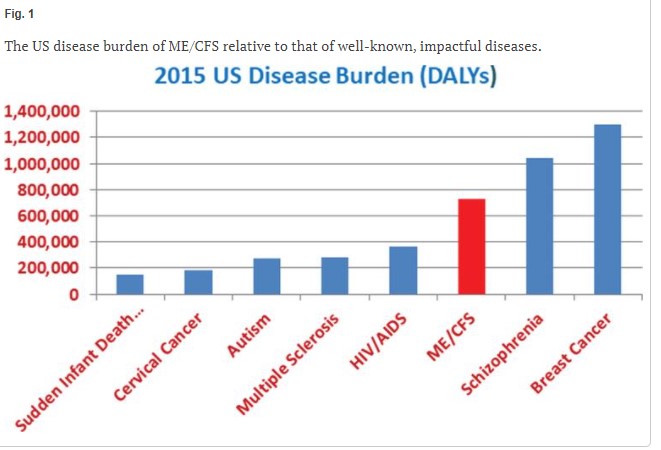 Next – comparing NIH funding with the burden produced by ME/CFS indicated that ME/CFS had one of the higher levels of disease burden – and one of the lowest levels of funding (A). Using the NIH’s own plot, the authors estimated that NIH funding would have to increase 14x’s to well over a hundred million dollars to be commensurate with the burden ME/CFS wreaks on people in the U.S. 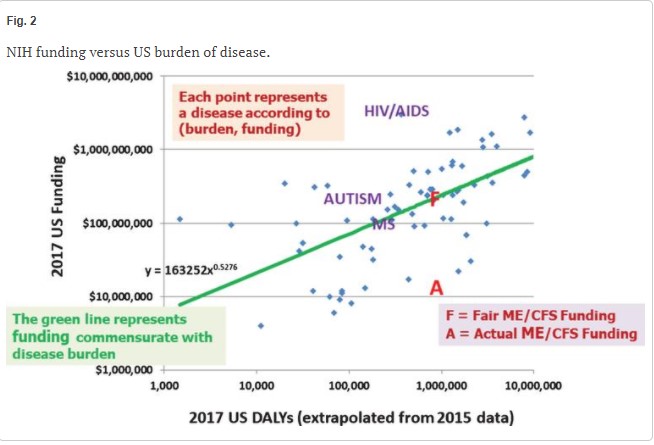 Next, they asked how ME/CFS fared funding-wise compared to diseases with similar disease burdens. 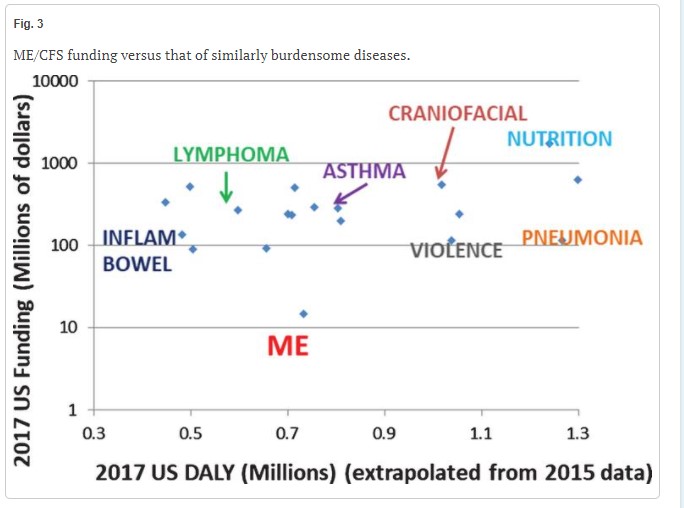 Ouch! ME/CFS is sitting way at the bottom with the least amount of funding. The situation is actually much worse than it looks. Since the data is plotted on a logarithmic scale, ME/CFS isn’t even close to getting the amount of funding than, other diseases which produce similar disease burdens. Inflammatory bowel disease and asthma, for instance, get over 10 times the funding that ME/CFS does.

Next they asked what percentage of funding each disease was getting if it were funded at the expected levels, given its disease burden. 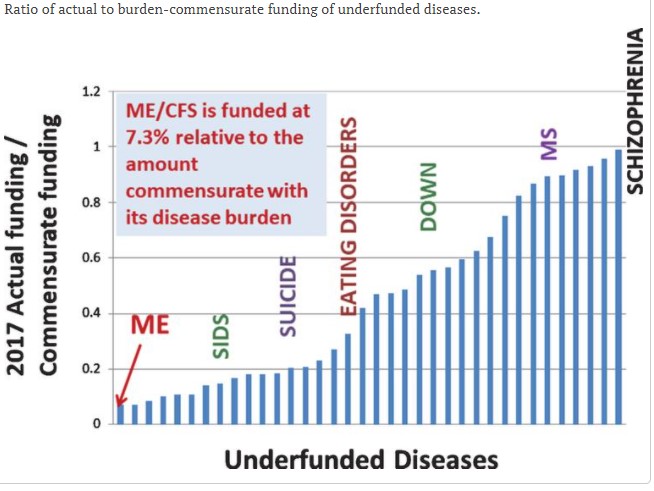 Percentage of funding relative to that expected, given a diseases disease burden.

Once again, ME/CFS demonstrated an uncanny ability to be at the very bottom of the barrel.

One could (and will) gnash one’s teeth, beat one’s chest and just generally groan at the lack of support provided by the NIH. The trick, though, is not to give into despair or even anger. The consequences of giving into the despair is that nothing ever does change. You do get to spare yourself the risk of trying to make a difference, but the lousy funding, little support, few doctors … that will stick around – and who really wants that? You might as well get into action.

The good news is that wehave a really, really, (really) strong case to make. The only things that I can see that have moved the NIH with respect to ME/CFS are Congress and NIH-originated reports (IOM, Pathways To Prevention report).

The NIH is difficult to directly intervene with. Its response to the hundreds of media reports on the long haulers was to basically ignore them. It was not until Congress gave the NIH over a billion dollars to study the long haulers that the NIH actually started to do something about them.

Congress, though, is another story. Congress gets it that there’s something wrong about providing peanuts to a disease that affects a million-plus people. There’s something immoral about funding a disease at 1/14th of what its disease burden indicates it should get.

Plus, Congress is the elephant in the NIH’s room. Congress yields a big stick – it funds the NIH. It turns out that, historically, it’s Congress that’s been the big mover at the NIH. Most major NIH initiatives (Brain Initiative, HEAL Initiative, 21st Century Cures) originated in Congress – not the NIH. If we can really get Congress on our side, the NIH’s history of neglect is over.

We don’t need to despair at those evocative graphs. They’re providing sweet tools for making our case. Our most potent opportunity to do that is coming up at Solve ME/CFS Initiative’s Lobby Day/Lobby Week.

On Lobby Day, we get to talk to the only people who can push the NIH around. Lobby Week goes from April 18th to the 24th. Representative Jamie Raskin will be giving a keynote address.

Register Here Before April Sixth To Make a Difference.

A big thank you to Art Mirin, Mary Dimmock and Leonard Jason for providing such evocative snapshots of where we are.