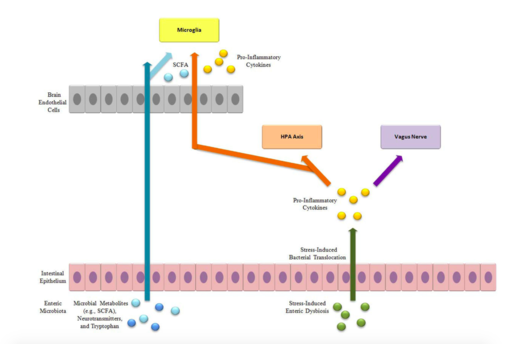 The gut-brain axis has been validated in many studies.

More studies need to be done, but it appears that something has gone awry in the gut flora of people that’s impacting the symptoms found in chronic fatigue syndrome (ME/CFS), fibromyalgia (FM), Gulf War Illness (GWI), and now, it appears, long COVID. That’s not a surprise. Studies and papers exploring the gut-brain axis abound and make it clear that gut issues can impact the central nervous system and can influence symptoms like fatigue, pain, and sleep.

First, this blog looks at what the gut flora studies have found in ME/CFS, FM, GWI, and long COVID. Then it’s onto a cheap and possibly effective gut flora modifier that might help.

A 2018 review concluded that the poor/fair quality and the mixed results of gut microbiome ME/CFS studies indicated there was “currently insufficient evidence for enteric dysbiosis playing a significant role in the pathomechanism of CFS/ME.” Indeed, Hanson’s 2018 study did not find significant evidence of dysbiosis in ME/CFS but Lipkin’s 100-person 2017 study, Hanson’s 2016 study, and a 2013 DeMeirleir study did. So did one of the most interesting and possibly consequential microbiome studies in ME/CFS. A small 2015 study found that exercise produced major changes in the gut microbiome, and problems with leaky gut in ME/CFS but not in healthy controls.

“Something Completely Different”: Ian Lipkin Talks at the CDC on ME/CFS

“Something Completely Different”: Ian Lipkin Talks at the CDC on ME/CFS – Health Rising

Plus, the 2018 review did not include Lipkin’s 2018 study, which was able to integrate fecal metagenomic data with plasma metabolomic data – thus linking together alterations in the gut with metabolic markers in the blood. Nor did it include the most recent ME/CFS microbiome study – a 105-person Italian study – which found similar results as past microbiome studies: i.e. decreased levels of bacteria from the Firmicutes phylum and increased levels of bacteria from the Bacteroidetes phylum were present.

The authors reported that this shift in gut flora mimics what has been found in autoimmune conditions such as Crohn’s disease, lupus, and diabetes. Interestingly, in the latest study, the alterations in gut flora in both people with ME/CFS and their near relatives were mainly due to increases of the notorious Clostridiales order which contains anaerobic bacteria (oxygen is toxic to them).

Many Clostridiales bacteria are not harmful but the order also includes notably toxic species such as Clostridium difficile and C. botulinum. Intriguingly, the Clostridiales bacteria found decreased in ME/CFS (Lachnospiraceae family) were “good” bacteria that produce butyric acid – an important energy source and gut lining protector. Increasing butyrate production will be a major theme in GWI studies (see below).

Another 2018 review found only two studies that attempted to use probiotics to improve ME/CFS symptoms. Both studies used a single probiotic (Lactobacillus casei strain Shirota, Bifidobacterium infantis 35624) to change the gut composition and both appeared successful in reducing anxiety or inflammatory markers. While the studies were successful, the authors called the evidence that probiotics can influence ME/CFS “limited”.

The gut microbiome hasn’t been studied as well in fibromyalgia, but similar findings have shown up there. A 2004 Pimental study, which unfortunately has not been replicated, found small-bowel bacterial overgrowth in 100% of FM patients, 84% of IBS patients, and only 20% of healthy controls. Pain levels in FM were positively correlated with breath hydrogen levels.

Back in 2008, in a study which one review article did not entirely trust, increased gut permeability was found in both FM and chronic regional pain patients compared to healthy controls. All in all, the results suggest a breakdown in the gut flora in FM has occurred, but a recent Australian review reported that “a paucity of quality research in this area” remains.

Gulf War Illness (GWI) may be on the firmest ground with regard to gut dysbiosis. It’s certainly moved the quickest with regard to testing potential gut treatments. This is presumably because of two overlapping emphases – both of which are missing in ME/CFS and FM. One is the focus from GWI research funders, such as the Department of Defense, on producing treatment options, and the other involves the rapid production of animal models to test potential treatments.

Several studies have found evidence of leaky gut in ME/CFS and GWI.

A 2019 placebo-controlled, double-blinded 120-person-plus GWI study, unfortunately, did not find that an antibiotic often used in IBS, called Rifaxmin, was helpful.  Another 2019 study found, though – similar to ME/CFS – increased levels of Firmicutes bacteria in GWI. Using the mouse model, a 2019 study suggested that alterations in the gut virome were contributing to leaky gut in GWI.

Gulf War Illness researchers then tried to reverse gut and other problems by using a nutraceutical, derived from the Chinese herb Sparstolonin B (SsnB), to boost butyrate-producing bacteria levels in their mouse model. By restoring the tight gut linings in the mice, SsnB reduced inflammation in the gut and in the central nervous system.

Continuing their focus on increasing butyrate production, GWI researchers next used a substance called lacto-N-fucopentaose-III (LNFPIII) found in mothers’ milk, which they reported has “no documented adverse outcomes and has shown promising immunomodulatory effects”. Interestingly, given the recent emphasis on the innate immune system in long COVID by Avindra Nath and Bruce Patterson, the FNFPIII treatment produces its effects by pushing that system in an anti-inflammatory direction. They reported that LNFPII produced “significant and lasting GWI effects” in the mice.

Note that, despite the emphasis on the gut in GWI research, no GWI studies have attempted to improve the gut microbiome using probiotics. Note also that the studies have focused on increasing the levels of the same kind of butyrate-producing bacteria found to be depleted in ME/CFS (butyrate bacteria), and that doing so has been helpful.

The fact that GWI studies are having success using gut modifiers – in GWI mice, for sure – suggests that successful gut modification in GWI (or, for that matter, ME/CFS, FM, or long COVID) may not necessarily entail using probiotics, antibiotics, fiber supplements or diet.

Few long-COVID studies have been done yet, but an oral microbiome study found similar bacterial species to those found in ME/CFS. A review of 4 long-COVID microbiome studies found a loss of microbiome biodiversity, an increase of inflammatory bacteria, decreased anti-inflammatory bacteria, and leaky gut – all of which have been found in ME/CFS. Two studies are underway to study a gut flora modifier called KB109 in long COVID.

It’s good to see new gut treatment options showing up. Recently, an ancient possibility – possibly the most ancient possibility – one which required no special supplements or drugs was tested in healthy controls. A complex Stanford study, “Gut Microbiota-Targeted Diets Modulate Human Immune Status“, explored the role fermented foods can play in returning the gut flora to health. The results were encouraging indeed.

Anyone wishing to try either diet should note that the study contained a 4-week ramp-up phase where the participants gradually increased their fiber/fermented foods intake (“ramp”), followed by a 6-week maintenance phase where they maintained a high level of either fiber or fermented foods (“maintenance”). During the final 4-week choice period, the participants were able to continue their diets as they wished.

Throughout the study, stool samples were assessed for microbiome composition, function, and metabolic output. The blood samples produced a “systems-level view of the immune system”, and included cytokine levels, cell-specific cytokine response signaling, and cell frequency and immune cell signaling at steady-state. In short, this was a heavy-duty study. It was funded by a variety of sources including several foundations, an NIH grant, and a fellowship.

The goal seems to have been to have the participants increase their fiber/fermented intake in a manner of their choosing. They were provided detailed instructions to encourage the two groups to increase their variety of fiber sources (legumes, seeds, whole grains, nuts, vegetables, and fruits) or fermented foods (fermented dairy products, fermented vegetables, fermented non-alcoholic drinks).

People in the high-fiber diet arm increased their fiber consumption from an average of 21.5±8.0 g per day (.75 ounces) at baseline to 45.1±10.7 g (1.6 ounces) per day by the end of the maintenance phase (Figure 1C) – about triple the average American intake of fiber/day.

High-fiber foods had some positive benefits but did not increase microbial diversity or decrease inflammation. A more diverse microbiome may be necessary to achieve the full benefits of high-fiber diets.

The high-fiber diet group reported an increase in stool softness over time.

Fiber-rich foods provide a good “fermentable” carbon source for the microbiome, but despite the high levels of dietary fiber reached in the high fiber group, microbiome diversity did not increase. Nor did inflammatory markers decrease.

That suggests that high-fiber diets may not as beneficial for people who already have a less diverse microbiome, and that finding ways (such as fermentable foods) to increase gut microbiome diversity may be helpful. The gas and bloating that some people experience when adding fiber to their diets may be due to a lack of gut flora diversity.

The fermented food cohort reported bloating during the ramp-up phase which disappeared over time.

In contrast to the high fiber group, microbiome diversity increased over time in the fermented foods group and reached its greatest peak during the last “choice” phase of the study. More was better in this case; the more fermented foods a person ate, the higher their microbial diversity. (Note again that the fermented portion of the diet was slowly increased and some bloating was found at first.)

The bacterial species that increased over time were all in the same Firmicutes phylum which has been found depleted in ME/CFS. Four of the species were found in the Lachnospiraceae family which has also been found depleted in ME/CFS.  Interestingly, the new species did not directly come from the fermented foods. Instead, the fermented foods appeared to open the gut flora for the introduction of new bacterial species.

The fermented foods also resulted in a broad dampening of inflammation markers. Nineteen of the 93 cytokines, chemokines, and other inflammatory serum proteins (including some biggies: IL-6, IL-10, and IL-12b) that were assessed during the study decreased significantly. Markers of immune activation also declined.

GWI interventions have largely focused on increasing butyrate levels. The increased butyrate levels found group-wide (but mostly in the high-fiber group) in the study were associated with decreased B-cell frequency – an interesting finding given the role B-cells play in autoimmunity.

The authors called the possibility that a high-fiber/high fermented food diet could synergistically improve both microbiome and immune system functioning “exciting”.

More studies are needed, but gut microbiome studies suggest microbiome diversity is reduced in ME/CFS, with bacteria from the Firmicutes phylum reduced and bacteria from the Bacteroidetes phylum increased. A similar pattern is found in autoimmune diseases as well as Gulf War Illness, where researchers have found that enhancing butyrate bacteria using gut treatments (the Chinese herb Sparstolonin B (SsnB), lacto-N-fucopentaose-III (LNFPIII), Andrographolide) has tightened gut linings and reduced gut inflammation and neuroinflammation. Thus far, the long-COVID gut studies suggest a similar process is occurring there.

Note that some bloating may be expected as fermented foods are incorporated into one’s diet but this study found that the bloating did disappear over time. People with mast cell activation syndrome (MCAS) may experience problems with fermented foods. That will be covered in the next blog.