Long-COVID exercise study brings it closer to ME/CFS – and suggests a wholesale shift in muscle production may have occurred.

People with long COVID will appreciate this study’s attempt to get at perhaps the core problem in the condition – energy production. People with chronic fatigue syndrome (ME/CFS), on the other hand, will appreciate seeing new researchers focusing on an area of great interest to them.

This study, “Decreased Fatty Acid Oxidation and Altered Lactate Production during Exercise in Patients with Post-acute COVID-19 Syndrome“, brings in a cadre of researchers from the Pulmonary Physiology Lab at the University of Colorado Anschutz medical campus, and, get this, the Center for Post COVID Care at National Jewish Health Hospital, in Denver. National Jewish Health, by the way, calls itself “the leading respiratory hospital in the nation and the only one devoted fully to the treatment of respiratory and related illnesses”.

This was a retrospective study; i.e. the data came from chart reviews of cardiopulmonary exercise (CPET) tests done from June 2020 to April 2021 on 50 people with long COVID. During the test, the participants exercised to exhaustion (or near) on a bicycle.

It was probably an evolutionary necessity that our bodies retain an ability – even when sick – to produce substantial amounts of energy for short periods of time when needed. Some people with ME/CFS retain their ability to do that while others don’t. This study suggests the same scenario plays out in long COVID – some people can produce normal amounts of energy on a one-time basis while others can’t.

VO2 max – which measures the amount of energy one is able to produce during one’s maximum effort – was normal in 68% of the participants but reduced in almost a third of the participants (32%). Peak VO2  – the absolute peak energy produced at one point during the test – findings were similar. Given that about a third of the long-COVID patients generated unusually low amounts of energy, one wonders how many more would have had trouble doing so in a two-day exercise study.

Then it got really interesting. As we’ve seen in ME/CFS, the long-COVID patients’ levels of lactate – a byproduct of anaerobic energy production – were increased. That suggested that the people with long COVID were rapidly blowing through their stores of clean energy produced by aerobic metabolism. We use aerobic metabolism in the mitochondria to produce most of our energy. It’s particularly needed when we do things like walk, run, or bike. 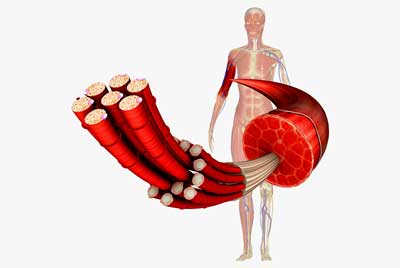 Could a mitochondrial dysfunction have changed the types of muscles found in long COVID and ME/CFS?

When the aerobic energy system is overwhelmed, the anaerobic energy production system steps in to give us a last boost of energy. That comes at a price, though. Less energy is produced, and substances like lactate build up and produce pain, fatigue, etc. That last extra pop, though,  might have given our ancestors enough energy to escape from the cave bears, dire wolves, or saber-tooth tigers they were running away from.

The increased levels of lactate found indicated that the long-COVID patients relied more on anaerobic energy production than expected.

In contrast to the third or so of long-COVID patients who failed to reach normal levels of energy production, the authors reported all 50 of the long-COVID participants produced significantly lower levels of fatty acid oxidation. That meant that a key source of the electrons needed to produce energy in the mitochondria was impaired.

The authors then plunged into an illuminating explanation. The anaerobic energy gets a bad name in ME/CFS, but it’s actually operating much of the time – at low levels. It’s only when we rely on it for things it’s not designed to do that we start experiencing pain and fatigue. Lizards, after all, don’t jog.

The high levels of lactate found in the long-COVID patients early in the exercise session (e.g. 0.9 mM at 150 W) suggested mitochondrial dysfunction was present. The lactate increase should occur later as our systems switch from relying on fatty acids to relying more on carbohydrates.

The authors noted that at these lower levels of exercise, the lactate we produce should be oxidized to provide fuel for the mitochondria found mostly in the slow-twitch muscle fibers; in other words, it should not build up. That suggested that this slow-twitch muscle fiber lactate uptake process may not be functioning well in people with long COVID.

The possibility of a muscle fiber switch in ME/CFS has been raised by David Systrom and Mark Van Ness more recently, but an Italian research group has led the way.

While the authors of the long-COVID paper didn’t mention it (they didn’t mention ME/CFS at all),  back in 2009, an ME/CFS study found an increased incidence of fast-twitch muscle fibers. The authors suggested an “increase in the more fatigue-prone, energetically expensive fast fibre type… might contribute to the early onset of fatigue typical of the skeletal muscles of CFS patients“.

While this shift can occur as a result of low activity, the Italian group’s findings suggested this was not so in the case of ME/CFS. They also noted that this muscle fiber shift found puts a further strain on ATP production, which the body typically resolves by increasing glycolysis (anaerobic energy production), which further increases lactate; i.e. it can produce a vicious circle.

They weren’t done with ME/CFS, though. Nine years later in “Old muscle in young body: an aphorism describing the Chronic Fatigue Syndrome“, they provided evidence suggesting that the muscles in people with ME/CFS were aging more rapidly than usual. They proposed that a mitochondrial dysfunction was producing large numbers of free radicals (reactive oxygen species) that were damaging the muscles. They even suggested that high levels of calcium (shades of Wirth/Scheibenbogen) in the muscles would lead to a chronic state of contracted muscles.

Another study reported that a group of ME/CFS patients with a severe infectious onset had the trifecta – high levels of free radicals even at rest, and, in what sounds like very old muscles indeed, their muscles were mostly dead to the world (didn’t respond to exercise).

Time will tell if critical parts of ME/CFS have been on display for all to see for quite a while.

The authors believed their study was the first to suggest mitochondrial dysfunction in long COVID.

It’s encouraging to see similar findings pop up in this most crucial of areas – energy production – in long COVID and ME/CFS. This retrospective study found normal exercise capacity overall (but reduced exercise capacity in a third of the long-COVID patients), but more importantly, perhaps, increased lactate levels early in the exercise process and reduced fatty acid oxidation, indicating that mitochondrial dysfunction was present and “metabolic reprogramming” had occurred.

The study pointed back to a possible issue in ME/CFS that achieved some prominence with an Italian research group but hasn’t been discussed much elsewhere: whether a switch to more anaerobic fast-twitch muscle fibers and away from more aerobic slow-twitch muscle fibers has occurred in these diseases. If this is so, the muscles simply may not have the capacity to produce much energy aerobically and could help explain why the people with ME/CFS and/or long COVID have so much trouble with exercise. It might also suggest that the best form of exercise for these conditions is very short, possibly intense bouts of weight-bearing exercise (???)

All of this may circle back to the main driver – a mitochondrial dysfunction – a distinct possibility not only in long COVID and ME/CFS but in fibromyalgia as well.

The study had a number of limitations: it was relatively small, was retrospective and it had no control group – so the results need to be validated in larger studies. Its results do appear to jive with what we see in ME/CFS however, and the authors stated they believe theirs is the first study to provide evidence of mitochondrial dysfunction in long COVID.