Progress in the U.K.

Now this is progress. Newcastle University – the home of Dr. Julia Newton- is teaming up with a hospital (Newcastle Hospital) and two Trusts (Tyne and Wear NHS Foundation Trusts) to translate scientific research findings into treatment possibilities. These Trusts employ more than 6,000 staff and serve a population of approximately 1.4 million people. The Trusts are listed as mental health and disability trusts but the focus is going to be on common age-related chronic diseases, such as dementia and musculoskeletal disease, cancer and diseases that affect the brain.

It’s always good when academia and medicine get tied at the hip but here’s the kicker: the publicity release featured their work on chronic fatigue syndrome.

There was no downplaying the seriousness of ME/CFS. The news release stated that chronic fatigue syndrome “causes crippling fatigue, often with severe muscle pain that does not go away, and can create long-term disability.” It related the case of a professional who “went from being a fully independent working mum, to becoming dependent on my partner to look after me and my 2 daughters in the space of two weeks.”

Having a professional become mysteriously disabled in two weeks is not exactly a recipe for a psychological disorder.

For this to happen in the land of CBT and GET seems like pretty much of a jaw-dropper but maybe not. The ME/CFS Community is very active in the UK and Dr. Julia Newton has been doing some stunning work.

First she found that people with ME/CFS produced twenty times more acid in their muscles during exercise than normal. That little abnormality piqued Dr. Newton’s interest so much that she took some muscle biopsies, grew them in the lab and then examined the biochemical changes that took place during exercise.

In 2015 Newton found greatly impaired production of an enzyme called AMP Kinase (AMPK) and a cytokine (IL-6) involved in AMPK activation. Described as a cellular energy sensor and metabolic regulator AMPK, AMPK activation switches the body from being in an energy consuming to an energy producing state.

AMPK ensures that proper ATP levels are present in our cells are. As ATP declines during say, exercise, AMPK triggers more ATP production. AMPK should, therefore, be activated in the muscles during exercise but when Newton whacked the muscle cells from ME/CFS patients with exercise, she found no evidence of AMPK activation.

AMPK is not just any enzyme. It’s getting enormous attention because of the central role it plays in so many processes. One review article stated AMPK has “umpteen downstream targets whose phosphorylation mediates dramatic changes in cell metabolism, cell growth, and other functions.” It’s most well-known because of the role it plays in type II diabetes but is being examined in a host of other illnesses. AMPK deactivation, for instance, is believed to contribute to the muscle weakness seen in chronic obstructive pulmonary disease (COPD).

The mitochondria need to have oxygen to produce ATP and it appears that AMPK helps out there as well by helping to increase blood flows to the muscles. That’s an intriguing connection given the reduced blood flows some studies suggest may occur in the muscles and brains of ME/CFS patients.

A thyroid connection may be present as well. Noting the similar symptoms found in low thyroid production and AMPK disorders Hardie found that thyroid treatment increased AMPK activity. Hypothyroidism appears to be quite common in ME/CFS. 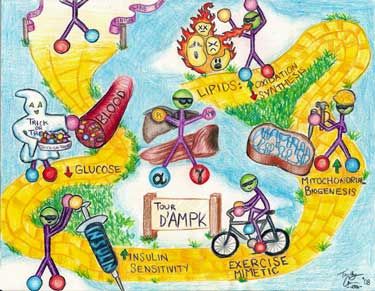 ME Research UK (MERUK) recently pointed out that this wasn’t the first time AMPK was postulated to play a role in ME/CFS. Over ten years before Dr. Newton found AMPK problems in ME/CFS Dr. Grahame Hardie at a MERUK Workshop talk in 2003 ( “Management of cellular energy by AMPK ” suggested AMPK problems might be present in ME/CFS. Hardie noted that AMPK gets (or should get) switched on when any cellular stressor (hypoxia, heat shock, glucose deprivation) that increases ATP consumption or inhibits it occurs.

Chronic fatigue syndrome is not diabetes but fatigue is one of the more disabling symptoms in diabetes. It turns out that high blood glucose slows the delivery of oxygen and nutrients to the cells.

“Fatigue is a constant and I have had to learn to do only what I can. I don’t push myself anymore as I pay for it dearly.”

” I sleep very little now for the past 7 or eight years and simply get by with rest. My exercise is almost nil ….as I am too fatigued most of the time. I never feel refreshed or rejuvenated after doing absolutely nothing. When I arise, I feel just as tired as when I went to bed.”

Several people with diabetes reported that supplements regularly used in ME/CFS and FM such as glutathione, CoQ10, B-12 and alpha lipoic acid have helped. Others, however, who found that exercise was quite helpful clearly have a different kind of illness.

From the Bench to the Bedside: Getting to Translational Medicine?

It’s one thing to find an abnormality. It’s quite another to test for possible solutions for it. Dr. Nancy Klimas recently noted one of the pitfalls of ME/CFS research has been a lack of follow through. The IOM panel she was on found many intriguing findings that they couldn’t use in their report because they were never validated. Despite a positive outcome the research for whatever reason simply stopped.

That’s not happening in this case. Dr. Newton stated that the new Allliance will allow her to carry out experiments to determine if the AMPK problems found in ME/CFS can be reversed. She hopes that these experiments will ultimately form the foundation for clinical trials. She called the new Alliance “an exciting step towards that holy grail of trialing medicinal products.”

With the Open Medicine’s Collaborative 2018 ME/CFS Research Center at Harvard focusing on the muscles as well we should have much more information on this potentially vital part of ME/CFS in the upcoming years.

Advocates have been working hard for many years in the UK and it looks like some of their efforts are paying off. Despite the years the UK government has devoted to making the conversation about ME/CFS about behavior the physiology just keeps leaking out.

When a hospital, two major Trusts and a University in the U.K. team up and use an abnormality in ME/CFS muscle physiology as an example of the breakthroughs they expect to produce, ME/CFS is clearly making strides.

Two factors – type II diabetes and obesity – are driving the interest in AMPK right now. AMPK activators are, in fact, being advertised an anti-obesity supplements.

If reduced AMPK synthesis is validated in chronic fatigue syndrome the interest in the enzyme should prove helpful. A variety of treatments that can enhance AMPK production in the laboratory have been identified. Most haven’t made it clinical trials; the Clinicaltrials.gov lists studies involving metformin, resveratrol, activamp, omeprazole and fish oil but the sheer variety of possibilities is encouraging.

With regards to drugs two of the main classes of Type II diabetes drugs, the biguanides (e.g., metformin) and the thiazolidinediones (e.g., rosiglitazone) have been shown to activate AMPK. Metformin’s ability to enhance AMPK production results in reduced glucose production in the liver and reduced insulin resistance in the muscle. A 2019 study suggested that metformin might be helpful in fibromyalgia.

Many other possibilities exist and new ones are being published almost monthly. A mice study found that the theaflavins found in black tea increased AMPK levels, oxygen availability (VO2) and energy expenditure for 12 hours. The researchers undoubtedly slammed the mice with theaflavins and the study noted that the bioavailability of theaflavins (their ability to penetrate to the tissues) is low – but the study points to a possible future avenue of drug development.

Another recent study found that a flavinol, rutin, increased AMPK activity in obese mice by 40% (and reduced their weight). Other studies in the past six months have reported that novel complexes from marine alginate, a Chinese medicine called Jinlada, and a drug called Dibenzoylmethane (DBM) have all increased AMPK activity.

The short fasting periods and ketogenic diets Courtney Craig has found success with both appear to increase AMPK levels.

“Clean Energy”: Can a Ketogenic Diet Help with ME/CFS and Fibromyalgia?

Some of these may be counter-productive. Berberine, for instance, increases AMPK activation by inhibiting mitochondrial functioning – thus triggering AMPK to activate ATP pathways. If exercise isn’t activating AMPK in ME/CFS then berberine might not be a good idea.

Most, if not all of these studies, are focused on increasing AMPK activity in type II diabetes – an immense problem facing health systems world-wide. Whether they might assist the kind of AMPK problems found in ME/CFS, of course, is unclear. Dr. Newton is apparently working on that now.