Who better to write this piece “This college dropout was bedridden for 11 years. Then he invented a surgery and cured himself” than Ryan Prior – who himself recovered from a debilitating mysterious disease. Doug Lindsay’s story is so powerful because anyone struggling with a disease for which no answers exist can relate – and none more than people with chronic fatigue syndrome (ME/CFS).

Twenty years ago, Doug Lindsay’s disease story started in a familiar way – at least to many people with ME/CFS.  After collapsing one day at school, he was told he had mono. 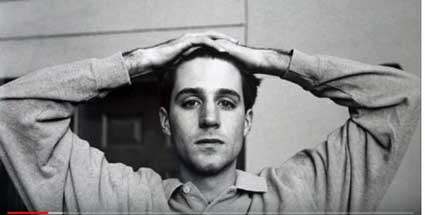 Doug Lindsay, about the time he got sick.

Six months of resting later, though, he still had “mono”: He still felt weak and dizzy and his heart was still racing – sometimes even when lying down.  Standing for more than a few minutes was out of the question. He was so weak, the former track athlete could barely walk.

In his heart, he knew what had happened. The other shoe – his family curse – had finally dropped. For as long as he could remember, his mother had been weak – too weak to walk or even pick him up when he was a child. As he grew up, she remained bedridden. By the time doctors had zeroed in on her thyroid, she was too weak to get the specialized treatment they thought could help.  In his CNN piece, Ryan Prior reported that she got to the point where she couldn’t tie her own shoes.

She, and now Doug, demonstrated the kind of extreme “fatigue” or inability to function so puzzling to see in ME/CFS.  A small stimuli – some food – could cause Doug’s heart to pound uncontrollably for hours. Resting helped not at all. Outside of the elderly, doctors rarely see this kind of complete debilitation in their patients.

Doug Lindsay was experiencing something else similar to those severely ill (and often not so severely ill) with ME/CFS – nothing helped! Despite seeing different specialists, Doug remained stubbornly bedridden. He was a medical mystery, and his future looked bleak:  he was a sick college dropout with a mysterious, debilitating disease – and his last referral had been to a psychiatrist.

He did have three assets, though: his cognitive functioning was apparently mostly intact; he had lots of time on his hands – and he had a 2,200 page endocrinology textbook to pour through. That book convinced him that neither he nor his mother had a thyroid problem at all: instead they had an adrenal gland problem. It turns out that adrenal issues can mimic thyroid issues.

Lindsay ended up hypothesizing that he had an adrenal dysautonomia. In fact, he believed that a whole class of adrenal-associated autonomic nervous system disorders existed which no one knew anything about.  (I’ve never heard of the adrenal gland being associated with dysautonomia either. It turns out, though, that the adrenal medulla is part of the autonomic nervous system and plays a role in motor control; i.e. movement. Could we be missing something?)

Like Jeff did with his craniocervical instability (CCI), Lindsay showed remarkable persistence. Unable to find a researcher to help him diagnose his problems, he paid for a row of seats on an airplane (so he could lie down), and posing as a Jesuit trained scientist (!), presented a poster at the American Autonomic Society’s annual conference in 2002. There, he talked to top researchers from Harvard, the Cleveland Clinic, etc. and got nowhere for 18 months until he met Dr. H. Cecil Coghlan, a dysautonomia specialist at Jarred Younger’s digs – the University of Alabama-Birmingham.

Convinced that his body was producing too much adrenaline, he got Coghlan to get him an IV drip of Levophed, which produces adrenaline’s opposite – noradrenaline. He improved, but he was not well – and the root cause of his illness was still a mystery.

Only two years and 4 scans later did his true problem emerge. He didn’t have a tumor – he had an enlarged adrenal medulla which was pumping out adrenaline non-stop. He had an extremely rare condition – only 32 cases had been reported – called bilateral adrenal medullary hyperplasia.

Surgery was the only cure, but the surgery itself was so daunting that Lindsay hit another dead end. It took a year for him to determine that it had successfully been done – in cats – in 1926 – and dogs in 1940 – but with no explanation how. Eventually he found a 1923 article from Argentina explaining how the surgery had been done in dogs. Eighteen months later, he went under the knife. Six months later, he was able to walk a couple of miles without incident. Today, almost a decade later, he’s not completely healthy – he still takes a boatload of medications and can’t handle physically demanding work – but he is upright and functional.

The question is whether people with ME/CFS/FM, etc. can take something – other than Lindsay’s remarkable persistence and creativity – from his story.  Could adrenal medulla hyperplasia or some other obscure adrenal problem be another case of a rare disease masquerading as ME/CFS in some people? (Please note Doug’s condition appears to have nothing to do with “adrenal fatigue” or cortisol issues; it involves the inside of the adrenal gland – the adrenal medulla – which helps regulate autonomic nervous system functioning)

First, it should be noted that the condition is very rare – and to make matters worse (or perhaps better) – Lindsay and his mother had an atypical presentation of it.  Extreme fatigue and remarkably reduced functionality were not mentioned in any of the studies I read. Instead, symptoms like high blood pressure, palpitations, headache, dizziness, tremor, flushing and sweating were.

Lindsay, then, like Jen Brea and Scott with their craniocervical instability, had an atypical case of adrenal medulla hyperplasia which had made him look like a very severe case of ME/CFS. The same may be true with Kyle McNease. I wonder how many people with heavy metal poisoning also suffer from extensive pathogen reactivation and severe orthostatic intolerance (as well as, come to think of it, adrenal issues).

Another take-away is the extreme hit to functioning that autonomic nervous system issues can produce at times.  It’s interesting that Dan Neuffer, another self-taught ill person, came to the same conclusion that Lindsay did, but with regard to Bob’s ME/CFS, the main problem was the ANS. Dan ended up recovering.

Unraveling the Cause of Chronic Fatigue Syndrome and Fibromyalgia? Recovered Author Asserts Single System to Blame

As to whether one might have this rare condition, a recent review states that an adrenal medullary hyperplasia (AMH) diagnosis is made by the presence of high blood pressure, increased urinary excretion of epinephrine, and the identification of the lesion. A 2009 study found reduced plasma epinephrine and urine metanephrine and higher plasma norepinephrine levels.

AMH’s closest cousin is something called pheochromocytoma, which results in the increased production of both epinephrine and norepinephrine and commonly results in high blood pressure, heavy sweating, headache, rapid heartbeat, tremors, pallor, and shortness of breath.  Note that these are all autonomic nervous system problems. 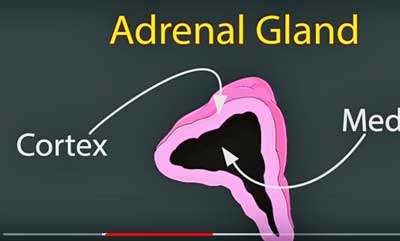 Note that Doug’s issue involved the adrenal medulla – the inside of the adrenal gland – not the adrenal cortex – which the vast amount of research focuses on. (From Doug Lindsay’s TedX talk – https://www.youtube.com/watch?v=w4s0uNy8Q2g)

That’s because, as mentioned above, the adrenal medulla – not the adrenal cortex, which the research in ME/CFS has been concerned with – is part of the autonomic nervous system. A recent study suggests it may even be a heretofore unrecognized serotonergic hub that uses serotonin to control the stress response (i.e. the sympathetic nervous system) – an obvious system of interest in ME/CFS.  Plus, two recent hypotheses: Cortene’s and Robert Phair’s Metabolic Hypothesis – suggest that problems with serotonin regulation could lie at the heart of ME/CFS.

One other potential link concerns the strong connections of the motor (i.e. movement) pathways of the brain to the adrenal medulla – something which makes sense given the sympathetic nervous system’s crucial role in preparing the muscles for and carrying out physical activity. Interestingly, these same parts of the brain play such a significant role in stress and depression that they’ve been suggested to form a “stress-depression connectome”. Since these parts of the brain also play a role in cognition, the trifecta they and the adrenal medulla present – movement, stress/depression and cognition – is intriguing.

Time will tell if there’s a link between the adrenal medulla and ME/CFS. In the meantime, Lindsay’s case is inspirational.  Besides finding a doctor who enabled him to figure out his condition and prescribe him drugs never before used for it, he convinced a team of doctors and the FDA to perform a unique operation on him.  Over his journey to better health, he contacted senior researchers at over two dozen institutions.

In his talk, Lindsay noted something critical: that most doctors operate from their experience. Anything outside their experience they tend to reject and, in fact, they told him: “Problems like you describe don’t exist”. This is because most doctors, most everybody really, are kind of lazy thinkers. They don’t try to recreate or rethink a problem: they rely on theirs and others’ past experiences.

There is a place for amateurs who rigorously do their homework, are respectful of researchers’ time, and can meet them on their own ground. Lindsay didn’t just have an idea – he’d spent time pouring through voluminous medical textbooks. In fact, it didn’t take Lindsay all that long. Once he had the tools, he came up with his proposed fix in just 18 months – and when he did talk to researchers, he was ready.

Lindsay’s story also suggests that we should keep our minds open, keep burrowing down all sorts of tunnels, and, above all, not lose hope. The medical profession thought it had nothing to give him, but in the end it did, and the answer, oddly enough, was hiding in plain sight in old medical textbooks!

That suggests we have no idea the surprises that may await us and from which corner they may come.  Who, even a couple of years ago, could have predicted the emergence of Cortene, the Metabolic Trap hypothesis, glycogen storage issues, red blood cell deformity, or craniocervical instability in ME/CFS?  Who knows what next month will bring?

Lindsay left some tips for people with complex, hard-to-understand diseases.