A Rapamycin Resurgence: An MD Moves the Needle on his ME/CFS

An MD with ME/CFS does a deep dive into the research – and lights upon an unusual drug that works for him.

The first blog in a series highlighting the different ways people have recovered or are recovering featured James’s remarkable improvement from a very severe case of ME/CFS while being treated for CIRS (chronic immune response syndrome) under the care of Dr. Heyman.

Up from the Ashes: James’s Severe ME/CFS Recovery/Recovering Story

The second in the series features another doctor felled by ME/CFS who’d fruitlessly tried many treatments over the course of his ten-year illness. His own research led him to try a drug that’s usually associated with longevity but which ended up working wonders with his ME/CFS. Here is Jeremy Waletzky’s ME/CFS recovery/recovering story.

I am a 79-year-old physician whose chronic fatigue syndrome (ME/CFS) was initially diagnosed 10 years ago by Dr. Anthony Komaroff, an internist and internationally recognized ME/CFS expert at Harvard. Immediately prior to my CFS, I was in very good health. My favorite activity was mountain hiking and a year earlier I had climbed to the top of an 18,000-foot extinct volcano in Chile. I frequently went on 1-to-2-hour aerobic hikes. “I was living life to the fullest.”

An upper respiratory infection triggered by ME/CFS. My main symptom was severe fatigue which produced brain fog. I suffered from a post-exertional malaise which usually peaked 24 to 48 hours after any demanding (including mental) activity. After working all my life in an intellectually challenging career, I found could only concentrate for two hours at a time. I was mainly housebound but could not do any household chores. At times I couldn’t walk a block. My social life was nonexistent. I recently found a note to myself that I was leading only 30% of my life.

Following Dr. Komaroff’s retirement, I was under the care of an excellent psychiatrist/neurologist at Johns Hopkins, who left practice in 2020. During my time with them, I tried antidepressants, antivirals, erythromycin, doxycycline, N acetylcysteine, trental, Nexavir, alpha-lipoic acid, three omega fatty acids, minocycline, S adenyl methionine, probiotics, courses of intensive Theta TMS (over 400 sessions), direct current brain stimulation, and infrared treatment – all without success. I made sure that all were administered at the correct dose for the correct time interval. I was also taking lithium 300 mg, lisinopril 10 mg, amlodipine 10 mg, Lamotrigine 75 mg, and amitriptyline 75 mg.

I noticed an improvement in three weeks and by six weeks I was in remission.

I was unresponsive to everything until beginning rapamycin treatment, 6 mg once weekly in December 2021. I noticed an improvement in three weeks and by six weeks I was in remission.

Rapamycin’s tale of discovery is unique and fantastic and can be readily found on the web. Rapamycin was initially approved by the FDA in 1999 to prevent organ rejection in liver transplant patients, is commonly used to prevent kidney transplant rejection, and is also used with similar drugs, called rapalogs for cancer treatment, and to prevent restenosis following coronary angioplasty.

Rapamycin has been used as a cancer treatment, in part because it’s able to reduce cell growth by inhibiting an enzymatic master regulator of growth called mTORC1 (mammalian target of rapamycin complex). 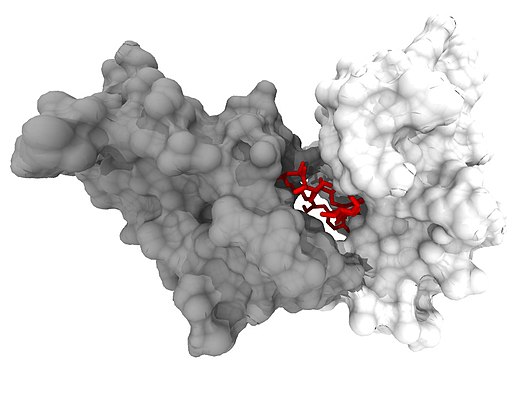 Rapamycin (in red) interacting with mTOR (Work done with the molecular visualization VMD program developed at the University of Illinois: From Wikimedia Commons)

This was the first time a drug had that effect and the journal Science listed it as one of the major breakthroughs of that year. Of special importance to me was the fact that the significant life extension of life occurred when the treatment was started in the mouse’s late middle age (19 months).

These findings have led to an explosion of research in the longevity field which has become incredibly complex. Over $20 billion in venture capital has been raised, including $3 billion from Jeff Bezos for the company Altos. (This doesn’t include the May announcement that Saudis will put between one to 20 billion dollars into this field).

It’s been said, “when you’re young you want to be rich, and when you are rich you want to be young”. Because Rapamycin is off-patent it will likely receive only a minute amount of research dollars from drug companies. Many other possible mechanisms to extend health span and lifespan are being investigated.

In the end, I turned to rapamycin because it’s an FDA-approved drug that studies suggest can help to make you younger, improve your immune functioning, and can work in the “elderly”.

Besides its possible longevity aspects, I knew that rapamycin has been used by millions of very sick patients following kidney transplants. I also knew that when used daily for immune suppression or cancer treatment, rapamycin was a dirty drug that produced many bad side effects.

Anecdotal reports suggested that when used intermittently – once weekly – at lower doses, these terrible side effects did not show up. While there is no comprehensive data about rapamycin use in smaller intermittent doses, some data also suggest that using the smaller dose use of rapalogs can enhance immunity. It is not FDA-approved for use in this way.

I had been unable to find any literature about the use of rapamycin in CFS or in long COVID, but after reviewing the literature and assessing for myself the risk/benefit ratio (having spent 10 years markedly limited by my CFS), I was very aware of the possibly profound physiological effects rapamycin might have. (In the comments Jeremy noted that he was also taking lithium which conceivably could have interacted with Rapamycin in a positive way.)

Several findings suggest, though, that rapamycin might be able to help with CFS. Its target – mTORC 1 – integrates multiple signals from growth factors, oxygen, energy levels, and nutrients to promote cell growth and proliferation by activation of anabolic processes, stimulation of energy metabolism, and inhibition of catabolic processes such as autophagy.

Rapamycin may help with autophagy – a process by which autophagosomes (pictured) clean up the cells. Autophagy may be inhibited in ME/CFS. (Illustration by Daniel Klionsky at the University of Michigan from Wikimedia Commons).

Some studies suggest that rapamycin’s inhibition of mTORC 1 may be able to reduce lactate production, increase ATP levels, improve cognition, and induce autophagy – a process the cell uses to clean itself up – and which a recent study suggests may be impaired in ME/CFS.

After learning of Rapamycin’s potential for extending health and lifespan on a podcast, over the next two months I reviewed podcasts, read books, and did a very thorough review of the medical literature. After assessing for myself the risk/benefit ratio (having spent 10 years markedly limited by my CFS), I was very aware of the profound physiological effects rapamycin can produce and hoped it might “reset” me. I decided to use a low dose of rapamycin once weekly.

I consulted with Dr. Alan Green, a retired forensic pathologist who initially treated himself with Rapamycin successfully in 2017 for congenital cardiomyopathy and noticed tremendous benefits to his overall well-being. Following that he unretired and has since successfully treated over 900 patients – focusing mostly on those with the aPOE4 gene that confers an increased risk for Alzheimer’s.

Using my Oura ring to monitor my resting heart rate and keep it within a safe activity level, I found I was able to slowly ramp my activity levels. At 79 years old with 10 years of inactivity behind me, progress has been slower than I wished, but I have made remarkable progress. As noted above, by six weeks I was in remission. Seven months after first trying rapamycin, I am no longer housebound, can do my share of household chores, can engage in a full day’s activity, and am regularly increasing my exercise.

My hiking distance is 2 1/2 miles, and I routinely exercise at 85% of my maximum heart rate (age-adjusted) for at least 20 minutes per day. I have now been free of symptoms of CFS for five months despite having re-engaged in full activity. My wife said she doesn’t recognize the new me. She is very, very happy. 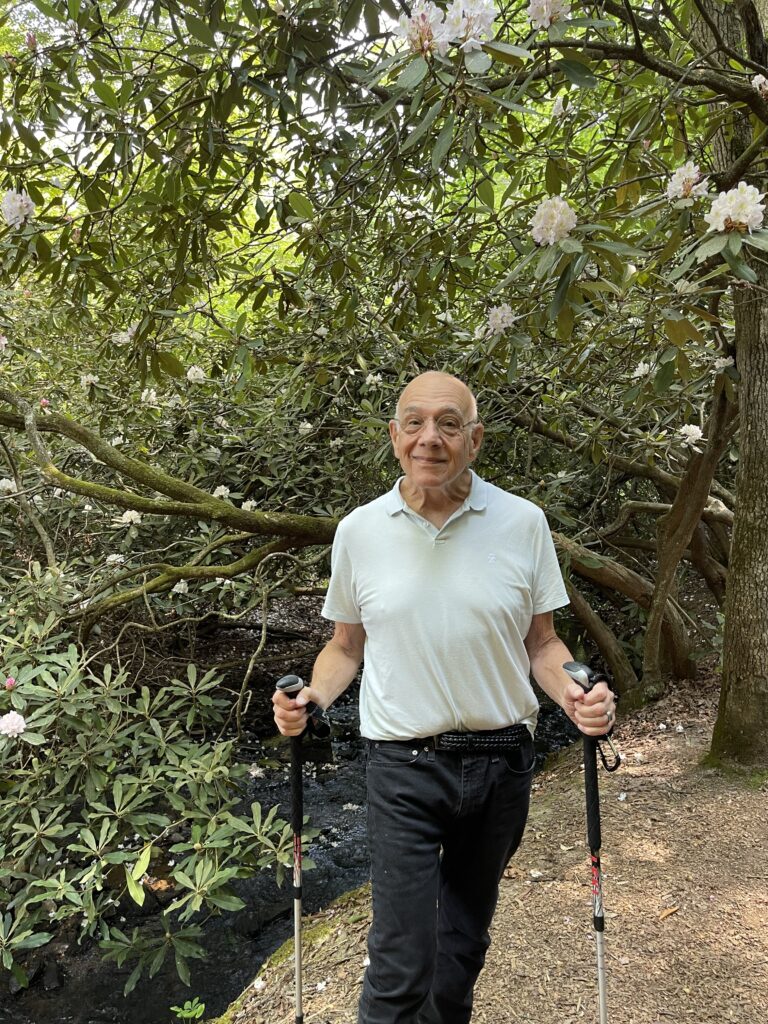 At the age of 79, Jeremy is back – after ten years with ME/CFS – to exercising regularly.

The only side effect I experienced was a two-day canker sore on my tongue three weeks after starting rapamycin – a common side effect. Note that there has been a warning about increased bacterial infections because of immune suppression, but this has not been my experience. (One review concluded that Rapamycin is probably more of an immunomodulator than an immune suppressor, and noted that animal studies suggest it may enhance vaccine effectiveness.)

Please note this is not medical advice – it is only my personal experience. This is also not an FDA-approved use of this drug. You will need to consult your physician.