Glial Cells to the Fore Again 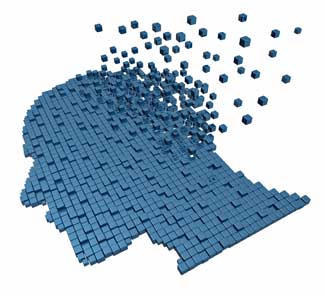 Could the “brain fog” in long COVID, ME/CFS, cancer fatigue, and similar conditions be caused by the same process?

Chemo fog, brain fog, fibro fog – even “COVID fog” – it’s a foggy world out there for people with cancer-related fatigue (chemo fog), brain fog (ME/CFS), fibromyalgia (fibro-fog) and COVID-fog (long COVID). Terms like this don’t spring up out of anywhere – all these conditions are characterized by cognitive problems, fatigue, and exertion problems.

The fog isn’t only in the patients’ brains. Despite the fact that the symptoms of cancer fatigue or chemo-brain are very similar to ME/CFS, and that cancer fatigue has been recognized for a couple of decades, few studies have assessed the two together. Unbeknownst to most of us, though, cancer fatigue and chemo-brain studies have been focusing on a familiar topic in ME/CFS – the microglial cells and neuroinflammation – to explain it.

In 2018, a Stanford neuro-oncologist and MacArthur “genius” grant recipient, Michelle Monje, who has been studying microglial activity for over 20 years, created a chemo-brain mouse model which found that chemotherapy resulted in microglial and astrocyte activation and cognitive problems. The study an unusual long-term depletion of specialized cells called oligodendrocyte progenitor cells (OPC) which produce the myelin sheath that protects the nerves and aids in signal transmission.

Similar findings are present in multiple sclerosis. In fact, the authors reported that the OPC problems “remain a pressing question” in cancer-related fatigue, multiple sclerosis, and neuroinflammatory diseases.

A couple of years later, a pandemic producing very similar phenomena called “covid-fog” or brain-fog piqued Monje’s interest. Just as the ME/CFS community did, Monje told Stat News that she suspected a syndrome similar to cancer fatigue was about to show up.

“I worried back in the spring of 2020 that we would perhaps see a syndrome very similar to what we see after cancer therapy, that we might start to see a cognitive syndrome characterized by things like impairment in memory, executive function, attention, speed of information processing, multitasking. And then, you know, within months, reports of exactly that sort of complaint started to emerge.”

She was most interested in the same type of COVID-19 patients that the ME/CFS field is interested in: people with mild COVID-19 infections who come down with long COVID. 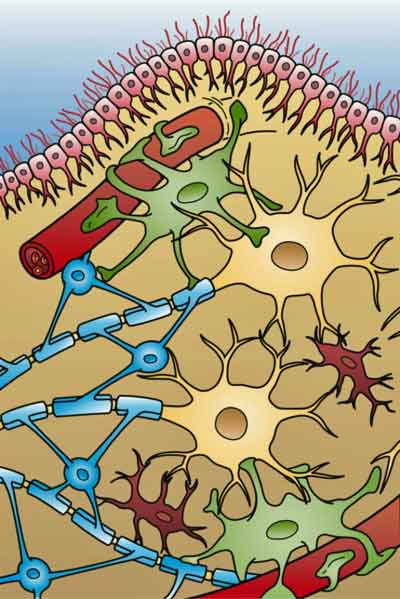 Taken together, the findings presented here illustrate striking similarities between neuropathophysiology after cancer therapy and after SARS-CoV-2 infection, and elucidate cellular deficits that may contribute to lasting neurological symptoms following even mild SARS-CoV-2 infection.  Fernández-Castañeda and Monje et. al.

Monje’s recent preprint, “Mild respiratory SARS-CoV-2 infection can cause multi-lineage cellular dysregulation and myelin loss in the brain,” (which includes Avindra Nath as one of many co-authors) indicated that a COVID-19 mouse model, plus autopsy results, and bloodwork from long COVID patients, revealed an eerily similar phenomenon to what was found in her chemo-brain study.

As the title indicated, it didn’t take much of a coronavirus infection at all – just a mild respiratory infection – to potentially produce “a profound multi-cellular dysregulation in the brain”. There was activation of the microglial cells associated with myelin sheathing covering the axons of the nerve cells – the long “wires” that connect one nerve cell to the other. Since myelin plays an important role in the transmission of nerve signals, even a small loss of myelin could impact cognitive functioning. Plus, the microglial activation could induce the astrocytes to kill neurons.

Why is the SARS-CoV-2 infection, in particular, so effective in producing such negative effects in some people? Monje noted the much broader inflammatory response – well beyond the typical immune response seen with other respiratory viral infections – the virus is able to evoke. The world just happens to have stumbled upon a pandemic that is very effective at producing long haulers.

She noted that even mild SARS-Cov-2 infection can induce prominent elevations in CCL11, a chemokine that’s been associated with “brain fog”. Increased levels CCL11 levels, encouragingly, have shown up in spades in ME/CFS including one study in which they were correlated with worsened cognition (and increased pain.) and a cerebrospinal study that proposed they reflected immune activation of the central nervous system. Higher CC11 levels have also been found in fibromyalgia, in people experiencing neuropathic pain, and in other long COVID studies.

Of course, the coronavirus is only the most prominent agent of cognitive impairment that we’re dealing with. Monje pointed out that other triggers – such as bacterial toxins, people who experience post-intensive care syndrome (PICU), and who come down with influenza – can also show declines in cognitive functioning.

Next Steps for Treatment

Monje et al. ended by reporting that “microglial depletion strategies”, and anti-inflammatory and neuro-regenerative strategies – most being assessed now in animal studies – have been shown to “rescue cognition.” CSF1R inhibitors, such as PLX5622, and similar agents that are currently in clinical trials can “restore similar multi-cellular deficits and rescue cognitive performance” in mouse models. The authors called these approaches “promising therapeutic avenue(s) to ameliorate the chemofog found in cancer fatigue”.

Beth Stevens, a Harvard Medical School professor, who discovered that the microglial cells in the brain were the brain’s main immune cells – a rather important finding – told Stat News that “clear next steps” regarding testing therapies for long COVID exist”. That doesn’t mean drugs would be available tomorrow but that the often arduous process of testing should begin now.

Monje was being prudent: “I don’t want to speculate about what therapies might be useful because I can’t recommend anything we haven’t tested. ” However, she stated that testing is beginning: “We will be testing potential interventions first in preclinical models and then there will be carefully controlled clinical trials so that we can identify the best and safest. But I wouldn’t want people to think, ‘Oh, I read somewhere that x y z, you know, calms down microglia.’ I’ve seen that happen on Twitter.”

Unfortunately, not a word was mentioned about glial cells in the big post-infectious disease (ME/CFS) or fibromyalgia. It’s certainly not for lack of interest in either disease. From Jarred Younger’s  ME/CFS thermography study and his longstanding interest in glial cells and neuroinflammation, to Herbert Renz-Polster’s recent “The Case for Neuroglial Failure” hypothesis for ME/CFS, to the fascinating fibromyalgia study which found that antibodies from FM patients had wrapped themselves around the glial cells in the dorsal root ganglia, plenty of data is also pointing to the glial cells in these diseases.

Since myelin enhances signal transmission, Barnden believes the increased myelination he’s seen in ME/CFS (which has also shown up in other diseases) is an attempt to compensate for balky signals emanating from a demyelinated brainstem. These areas, interestingly enough, regulate movement, encode sensory information (heat, cold, touch), produce executive functioning, and regulate limbic system activity – all areas of concern in ME/CFS. Given that, it’s perhaps no surprise that brainstem problems have already shown up in long COVID.

While Monje didn’t make the connection between ME/CFS and long COVID and cancer fatigue in her long- COVID paper, the Washington Post, in an impressive article, “How covid brain fog may overlap with ‘chemo brain’ and Alzheimer’s“, did.

The article cited Avindra Nath, who’s taken seemingly every opportunity to plug the connection between long COVID, ME/CFS, and other post-infectious conditions. Nath stated, “There is humongous overlap” between long covid and these other conditions.”, and that, “We as a research community are very interested to see how whatever knowledge we have about other diseases can make a difference with long covid”. Let’s hope!

(Nath – one of the few researchers who had any interest in post-infectious illnesses prior to the coronavirus pandemic – has, by the way, actually been tracking symptoms in 200 Ebola patients and 400 HIV patients for years.)

The more different eyes, the more that researchers from long COVID, ME/CFS, GWI, cancer fatigue, Post-ICU illness, etc., fields collaborate and learn each other’s work, obviously the better off each field is. In that vein, the entrance of another ME/CFS/FM-related field – cancer fatigue – into the long-COVID fray is potentially a very good sign.

Dr. Lekshmi Santhosh – the founder and medical director of U.C.S.F.‘s Long Covid and Post-I.C.U. Clinic – noted how important that all these fields be studied on a recent Ezra Klein podcast. She emphasized the strong overlap between long COVID and ME/CFS as well as post-intensive care syndrome – which has been featured in several Health Rising blogs.

Even Alzheimer’s researchers may get in the act, as some long-COVID researchers have found – to the researchers’ surprise – increased high levels of the phosphorylated tau proteins that are typically found in Alzheimer’s. The proteins were not found in the higher learning centers of the brain – as occurs in Alzheimer’s – but, interestingly enough, in the parts of the brain that control movement.  We don’t think of GWI or ME/CFS in the same vein as diseases like Alzheimer’s, but recently, high levels of antibodies to the phosphorylated tau proteins – were found in Gulf War Illness, and the 2005 Baraniuk brain proteome study suggested increased levels of amyloidic proteins were present in ME/CFS patients’ brains.

It would seem to make sense that these diseases would be dramatically different. Long COVID, is, after all, triggered by the coronavirus virus; ME/CFS by viruses, bacteria, fungi, toxins, and probably other things; post-Lyme disease by tick-borne bacteria; post-intensive care syndrome by being in the ICU; cancer fatigue by chemotherapy; and Gulf War Illness by toxin exposure. These are all very different triggers, yet these different triggers still manage to produce quite similar symptom patterns.

The latest cancer-fatigue research suggests that deep in the brain, similar processes may be going on. That would be a great win for all of these diseases, as core problems would provide core targets for treatments – potentially speeding up the process of finding treatments greatly. In that vein, it’s interesting that Nancy Klimas’s modeling work suggests that the same treatment (etanercept/mifepristone) protocol should work in two diseases with very different triggers (Gulf War Illness/ME/CFS) and quite different immune signatures. May that pattern continue!

Please Help Keep Us on the Web