Is the Entire Autonomic Nervous System Messed Up in Fibromyalgia?

Fibromyalgia (FM) researchers recently pointed an arrow at a rarely studied part of the brain – the brainstem – and proposed that a “convergence of autonomic regulation and pain modulation systems” had occurred in FM.

The Brainstem – Is it THE Pain Conductor in Fibromyalgia?

A Spanish FM research group probably couldn’t agree more. Their 2022 study, “Blunted short-term autonomic cardiovascular reactivity to orthostatic and clinostatic challenges in fibromyalgia as an indicator of the severity of chronic pain,” added an intriguing variable to the ANS picture in FM – the problems that occur when a person with FM stands.

In doing so, it brought FM a bit closer to the ME/CFS/POTS/OI complex of diseases characterized by problems with orthostatic intolerance or, more simply put, the ability to stand and remain standing (or in some cases sit and remain sitting) without having your system go bananas.

Seventy-four women with and without FM and healthy controls did a second-by-second “Chronic Pain Autonomic Stress Test”. The test consisted of doing an electrocardiogram, monitoring blood pressure, and doing an impedance cardiography test while standing and lying down.

Standing, it should be noted, puts quite a stress test on the autonomic nervous system. Blood vessel, blood pressure, muscle, and heart rate changes are all needed for us to successfully stand (or sit).

The study found – reported in ME/CFS for years – that providing a stressor – in this case standing – helped flush out problems that weren’t evident while lying down. In contrast to some ME/CFS studies, though, the study did not find evidence of increased heart rate at rest. 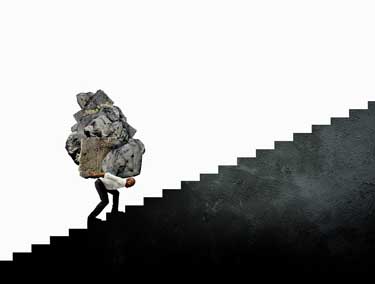 The authors linked their findings to a possible “inadequate mobilization of energy for coping with everyday life.”

In fact, it found no indication of increased sympathetic nervous system activation – quite the opposite, actually. While standing or lying down – the sympathetic nervous failed to perform up to snuff – something the authors called a “cardiovascular hyporeactivity”.

This hyporeactivity was particularly noticeable during the first 10-20 seconds of standing as the sympathetic nervous systems of the FM patients struggled to get into gear. That likely led to the same situation that’s been found in ME/CFS and postural orthostatic tachycardia syndrome (POTS) – a reduction in blood flows to the brain.

An odd pattern formed: heart rates should quickly ramp up during standing but then ramp down. In FM, heart rates never rose very high but failed to ramp down as much; i.e. while they were lower at first, they remained elevated longer than normal.

The same strange pattern occurred with the systolic and diastolic blood pressure readings – they both showed less variation during standing. Reduced stroke volume was found as well. 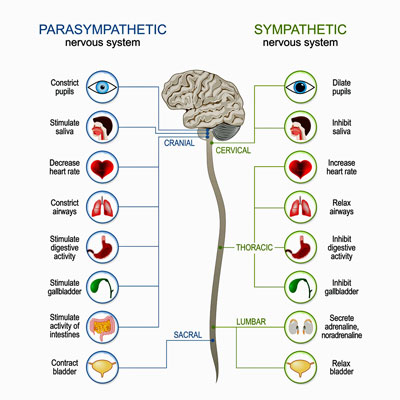 The authors concluded that both sides of the autonomic nervous system were impaired in FM.

Since the ANS constitutes one of the two major stress axes in the body, these findings suggest that physiologically, the bodies of FM patients are not doing well handling stressors. The authors proposed – in terms we often see in ME/CFS but not in fibromyalgia – that this results in “an inadequate mobilization of energy for coping with everyday life“.

It also likely increases pain. The worse the autonomic and cardiovascular readings, the more pain the FM patients reported. The authors focused on the inadequate baroreflex activation found in FM. The baroreflex both plays an integral role in the ANS and turns on the pain inhibition response. While it’s doing that, it’s also dampening one’s emotional response to what’s going on. If the baroreflex has gone whacky – and some studies suggest it has – it could be messing up the autonomic nervous system, ramping up pain levels, and making one suffer more.

Finally, this ANS letdown also probably impacts immune functioning as the ANS controls the cholinergic arm of the immune system.

Anxiety? Just the Opposite

A 2018 paper from this group produced similar results as well as one of the oddest results yet. Besides finding that people with FM weren’t able to sweat – a function of the autonomic nervous system – as well as healthy controls, their autonomic nervous systems also punked out when they were put into something called “state anxiety”. (This was apparently accomplished via a deep breathing exercise that included breath holding at the end of it.)

In what will only agitate those who believe FM is simply anxiety, the authors found that the FM patients’ autonomic nervous systems were largely unresponsive to being put into a “state anxiety” state. (The healthy controls ANS’s, on the other hand, responded dramatically to being put in this state.)

The authors stated this suggested that “a lower physiological activation in response to anxiety” was present in FM – which again suggests an unresponsive, “hypoactive” autonomic nervous system response. That’s kind of hilarious given recent attempts to categorize FM, ME/CFS, and similar diseases as anxiety diseases.

Increased Fight/Flight vs ANS Withdrawal or Both?

If that’s true, then finding ways to calm the fight/flight system could certainly help – but the main need may be to revitalize the entire autonomic nervous system.

Similar kinds of second-by-second cardiovascular assessments during standing have not, to my knowledge, been done in ME/CFS, but a similar pattern may apply as the sympathetic nervous system has appeared to “poop out” early during exercise. This study – as many others have –  designates FM as an autonomic nervous system disorder (dysautonomia), allying it with other dysautonomias such as ME/CFS, POTS, and long COVID.