In part III of Health Rising’s coverage of the 2022 IACFS/ME Conference, we cover presentations by members of Maureen Hanson’s NIH-funded ME/CFS research center.

Hanson’s focus on using exercise stressors to elucidate the problems in ME/CFS has led to some fascinating results. Arnaud Germain’s plasma proteomics study was big (n=130) and complex. We rarely see these kinds of studies outside the NIH. 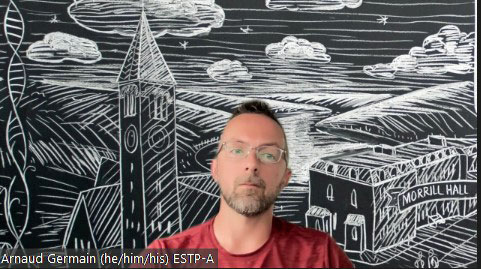 Germain reported that his study was unusual in the range of proteins – from very, very small to large – that it covered. He used Workwell’s 2-day CPET exercise protocol to assess the levels of over 6,000 protein levels before and after each exercise period. Quite a few interesting findings came out of this study – several of which had to do with large differences in how men and women with ME/CFS react to exercise.

The most significant difference found between the sedentary controls and females with ME/CFS – myoglobin – is new, but it appeared to fit the whole oxygen depletion/mitochondrial disruption theme, as myoglobin facilitates the movement of oxygen within the muscle. Myoglobin is distantly related to hemoglobin – which transports oxygen in the blood – but is found only in the skeletal muscle.

The really interesting thing about myoglobin and ME/CFS was that exercise really didn’t affect it at all. It was low (I think) before and after exercise in the females with ME/CFS.

Men and women exhibited remarkably different alterations in protein production depending on which stage of the study they were in. Exercise immediately and dramatically altered the proteins in women with ME/CFS, but it was not until 24 hours later during the recovery period that dramatic alterations in the men’s proteins occurred. When they occurred, though, the change was immense, with almost 1,500 proteins changed. (Does this suggest that the act of generating energy is more impaired in women, while the recovery processes that occur after exercise are more inhibited in men?)

This was brought out in a different analysis which showed a huge spike in altered proteins in the males during the “recovery” period but not for the females. In fact, males and females showed altered protein responses in every stage of the study – before the first exercise test, during the recovery period, and after the second exercise test.

Some of the major pathways affected were similar: the immune system, oxidative stress, and blood vessel pathways were affected in both sexes – just at different stages at times.

Since this was a two-day exercise study, they compared the effects of exercise on day 1 vs day 2. Interestingly, they found that exercise triggered a bigger change in proteins that occurred in the sedentary, but healthy, controls than in the ME/CFS patients.

That suggested a loss of adaptation in the ME/CFS patients. The healthy controls responded to the rigors of the second exercise test by scrambling their protein mix more. Lacking the same ability to do so, the ME/CFS patients did not.

Platelets, Microclots, and Monocytes, Oh My…

Grimson’s analysis of thousands of immune cells and thousands of genes per cell in 30 patients and 30 sedentary controls did something noteworthy – it used something called single-cell RNA-seq. Instead of analyzing the results of all the immune cells together, this technique separates the different immune cells into their various categories, and then assesses the gene expression found in those categories; i.e. it’s a more fine-tuned approach.

Grimson assessed the immune cells (WBMCs) at the time of the cardiopulmonary exercise test and 24 hours later – it didn’t seem so promising at first. Grimson found no large-scale changes in immune cell populations; that is, ME/CFS does not appear to be causing some immune cells to explode in numbers. Nor were unusual clusters of immune cells found.

The abnormalities came in the genes expressed in certain clusters of immune cells. Some dysregulation in NK cells and T-cell clusters were found. What really jumped out, though, was an immune cell that we heard almost nothing about until long COVID popped up – monocytes.

Monocytes are attracted to sites of inflammation. They’re large white blood cells that leave the bloodstream and burrow into inflamed sites, where they often turn into macrophages which engulf pathogens and clean up the area. As they do all that, they’re sending out signals (chemokines) telling the immune system where the trouble is present.

The type of monocyte that showed up in this study – classical monocytes – are aggressive monotypes that are particularly apt at ferreting out areas where damage has occurred, sending out signals to the immune system, and then blasting away at pathogens. (Non-classical monocytes appear to be more focused on the healing stages.)

A lot of dysregulation was found in the classical monocytes. Some aspects of monocyte functioning appeared to be upregulated, while others were downregulated. Increased levels of the chemokine CCL4 – otherwise known as “macrophage inflammatory protein” – which specifically attaches to CCR5 receptors, were found.

The many areas highlighted (granulocyte chemotaxis, chemokine activity, small molecule biosynthesis) led Grimson to conclude that the classical monocytes in ME/CFS patients’ blood are primed to move into the tissues where they would turn into macrophages.

Grimson believes the slow trickle of monocytes into tissues surrounding the blood vessels may be sparking inflammation.  That’s similar to what Nath believes may be happening in the brains of people with long COVID.

Monocytes/macrophages (monocytes can turn into macrophages) popped up big time in both Nath’s and Bruce Patterson’s studies.

Nath found evidence that macrophages – which monocytes turn into – had invaded tissues found outside the blood vessels in the brain in COVID-19. He believed small blood vessel leaks are occurring in COVID-19 and probably long COVID.

Patterson found evidence that monocytes are attacking the endothelial cells in long COVID – and a major part of his protocol involves stopping them. While Patterson found low levels of CCL4 in his long-COVID patients, though, Grimson found high levels of it in his ME/CFS patients.

We’ll see if that finding holds up, but if it does that really strong probability factor suggests that diseased monocytes may in some way play a major role in ME/CFS. 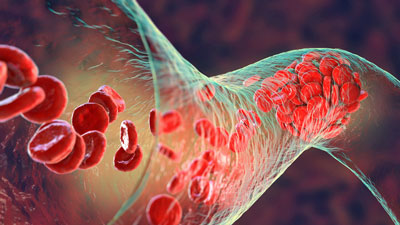 Platelet activation during exercise could be producing microclots in ME/CFS – and long COVID.

Next came some really exciting findings on what exercise does to the gene expression of ME/CFS patients. This study compared the changes in gene expression that occurred as a result of an exercise stressor in healthy controls (HCs) and people with ME/CFS. We’ve had gene expression exercise findings before but never like this. Perhaps the technology is better now, but this time, the gene expression data pointed an arrow straight at an area of great interest in ME/CFS – the platelets in the blood.

Platelets are unusual cells that don’t have a nucleus and are derived from the bone marrow or lungs. Their job is primarily to stop bleeding by gathering and plugging the hole where the bleeding occurs while sending out messages to begin a coagulation cascade.

It wasn’t just that differences in platelets showed up – the altered gene expression coming from platelets was about the only thing that was really different between the people with ME/CFS and HCs. Grimson said the “vast, vast” majority of the altered signal he found in ME/CFS was derived from the platelets.

That finding could jive with what’s suspected to occur in long COVID. Platelet activation could drive inflammation, clotting, and damage to the endothelial cells lining the blood vessels. It’s fascinating to see these kinds of side issues like clotting that have shown up in ME/CFS in the past but never attracted much attention show up in spades in long COVID, and now in this NIH-funded study.

The platelets in ME/CFS patients also appear to have a communication problem. Platelets communicate a lot with other immune cells through toll-like receptors (TLRs), but the cell signaling pathways in ME/CFS appeared messed up.