“I didn’t hold back, I tried just about everything from the Keto diet to IV Ketamine, an hallucinogenic that physically repairs the brain. I truly believe that I have found the perfect combination of therapies to help relieve the majority of the fatigue issues that you may be feeling whether they are caused by COVID, EBV, LYME or any other triggers.”

The third in a series of reports on how people recover or are recovering from chronic fatigue syndrome (ME/CFS), fibromyalgia (FM), and/or long COVID accentuates the very different ways people can recover from these diseases. None of the first three recovery stories have anything, that I can see, in common with each other.

The almost 70 recovery stories found on Health Rising’s Recovery/Recovering pages run the gamut from mind/body to antiviral, to alternative health, to dietary approaches, that have worked. 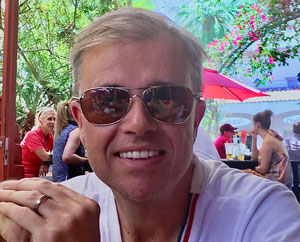 After Jason’s 16-year journey with ME/CFS, he reported that he now leads a “near-normal” life.

Jason’s story is particularly interesting because he found many of his answers in the farther reaches of the alternative health fields. He came down with the flu/EBV (or, he believes, XMRV) in the early 2000s and was sick for 3 weeks with fever, cough, etc.

In the beginning, he was fatigued most of the time but had some good days – which he invariably ruined by trying to exercise – which caused him to crash badly the next day. His health slowly but steadily declined with the crashes lasting longer and longer until any type of exercise left him bedbound for several days.

Over time he learned how to carefully manage his energy levels, which meant no exercise at all and very short walks. Frustrated by the fact that he couldn’t exercise or even play with his kids for any length of time, he became depressed.

After going down the antidepressant/just exercise path, his primary care doctors recommended he seek ME/CFS specialists, who opened his eyes to a new world. Jason fearlessly tried everything from mind/body work (Lightning Process, meditation) to nebulized hydrogen peroxide, to a cervical collar, that could help him and in doing, so he’s tried many things that, for the lack of money or knowledge or even fear, many of us have not tried. Some of them have worked out really well for him. While time-consuming and costly, his approach has allowed him to live a relatively normal life.

As he experimented on himself, he recorded his results for each of the many types of therapy he tried. Eventually, he took all the information he’d gathered together on many different treatment options and wrote a book to help others navigate the myriad of therapies out there.

I found the book well-written, quite thought-provoking, and at times, hilarious (his sense of humor is still abundantly intact). Jason frequently cites studies (but does not provide citations) but thankfully, provides abundant explanations.

First, a brief look at things that helped Jason with his recovery, and then a deeper dive into his book:

Jason’s One-Two Punch for His ME/CFS

I don’t know anything about nebulizing hydrogen peroxide. Jason states that the therapy purports to release large amounts of oxygen in the blood and is very effective at killing pathogens. He also states that the therapy is regularly used in Europe. For me, I tried intravenous hydrogen peroxide when nothing else was working but it – like everything else – failed to do anything.  Jason, however, takes the nebulized approach, which I haven’t tried. He provides instructions on how to do it and notes that food-grade hydrogen peroxide must be used in its 3% form (not its 12%, 30%, or 35% forms). (He uses saline solution to dilute it to 2%.) It should also never be drunk – only inhaled or used in an IV. (A future blog will check out the pro’s and con’s of taking nebulized hydrogen peroxide.)

Jason stated that his use of nebulized 3 ml hydrogen peroxide in the morning and nebulized 3 ml liposomal glutathione (s-acetyl-glutathione) in the evening provided “the remedy for fatigue, that I have been seeking for all these years”.

As his functionality declined further and further, Jason, not surprisingly, became depressed. The first treatment chapter in the book exhorts the reader if they are depressed, to find a way to treat it. That includes taking the standard antidepressants, as well as trying supplements such as St. John’s wort (but not with an antidepressant), SAM-e, 5-HTP, GABA, magnesium, folic acid, vitamin B-6 and anti-inflammatory supplements (omega-3, curcumin) and diets, seeing a therapist, immersing yourself in humorous movies, TV shows, and books, trying EMDR therapy, and forgiving others.

Jason – as he often does – ventures onto the skinnier branches of the alternative health care movement, and health care in general, noting that psychedelic drugs such as LSD, esketamine (Spravato), and psilocybin have, in the few trials published thus far, been found to be helpful. One example of how serious psychedelic research is getting came with a 200-plus patient treatment-resistant depression psilocybin study that was done solely to determine which dose (1 mg, 10 mg, 25 mg) was most effective (25 mg).

Psilocybin, of course, is now being trialed in fibromyalgia. A Health Rising poll reported that about 75% of people would be willing to enroll in a microdosing trial or use the drug if they could get it and knew how to use it safely. Sixty percent of the people who tried microdosing reported it was “very helpful”.

Letting the Sun Shine In? Psychedelics Are Being Trialed in Fibromyalgia

Jason found ketamine – an old-time anesthetic being repurposed to treat depression and chronic pain – “to be an incredible medication to help reset the brain”. He had a psychedelic-like experience that left him with a “sense of calm, exhilaration and euphoria”. The next morning, he felt “absolutely wonderful, with more energy and a lightness of mood” that he hadn’t felt in many months. Five out of the six sessions were “wonderful experiences” which left him with a lighter mood and much more energy. He called ketamine therapy “a real game changer”.  Recently he reported that he continues to receive similar benefits.

Ketamine is one of the most intriguing drugs around, and anecdotal reports have been promising. Two ketamine trials – including a quite large Belgium study – are underway in fibromyalgia. 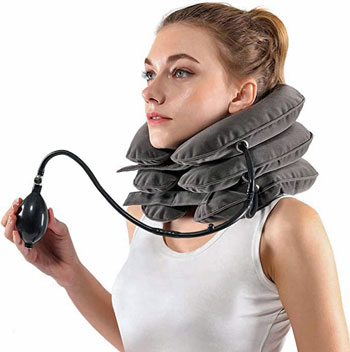 Jason found the brief periods of wearing a cervical collar – particularly while in a crash state – to be helpful.

Jason’s chapter on sleep is quite comprehensive and mentioned some things (Sermorelin, the COVE device, the DreamOn device, the Tap Tap method) that I had not heard of). Ditto with the autonomic nervous system chapter, where he links sympathetic nervous system problems to chronic inflammation and possibly cervicocranial instability. He reported that brief periods (10 minutes 3x’s a day) of wearing a $19 inflatable cervical collar from Amazon (many options are available) produced an “extraordinary effect” in relieving his fatigue – particularly on crash days. (He noted that side effects can occur and recommended checking with your chiropractor.)

That prompted him to contact a spine specialist, who confirmed that his vagus nerve was being pinched by his slightly misaligned vertebrae at the top of his spinal column. Physical manipulations by his chiropractic – shown by changes on his x-rays – have been able to relieve the pressure.

His absolute must, though, is an hour of meditation a day to calm the sympathetic nervous system down. Do not skip this – he adjures us – at any cost. His technique involves counting – up to 1,000 breaths at a time. At 6-700 breaths, he tends to enter a “theta-wave” brain state which disappears brain fog and leaves him relaxed and with a clear mind. He also recommends trying the MUSE device, particularly if meditation isn’t working. Other ideas include yoga or tai chi if you’re strong enough, singing or humming, eating fermented foods, aromatherapy, cold therapy, binaural beats, vagus nerve stimulation, the Alpha-Stim device, getting out in the sun, and humor. 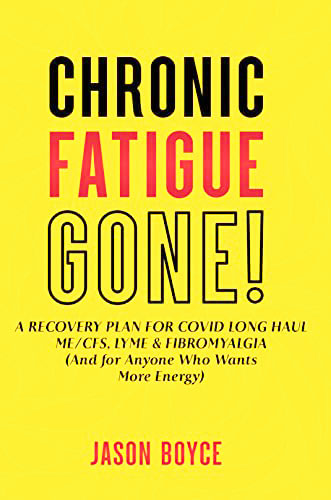 Jason’s book, “Chronic Fatigue Gone!: A Recovery Plan for Covid Long Haul, ME/CFS, Lyme & Fibromyalgia (And for Anyone Who Wants More Energy)”, can be purchased on Amazon.

With regard to exercise, Jason’s experience is that exercise is possible – if you combine it with oxygen therapy. EWOT (Exercise With Oxygen Therapy) involves inhaling oxygen produced from an oxygen generation unit when you exercise. He reports that EWOT improves circulation, restores blood flows, and increases ATP generation, and prefers it to HBOT given that it’s cheaper (but still expensive – $3,000), can be used at home as you exercise, and will probably provide a bigger energy boost.

He uses it every day for 15 minutes and gets a rush of energy from it. He said he “couldn’t recommend this therapy highly enough”. (See https://www.ewot.com/, https://liveo2.com/, https://www.hypermaxoxygen.com/, and https://www.promolife.com/ for more.)

A possible substitute for EWOT is doing the Wim Hoff breathing technique, which Jason says can be particularly helpful if you do it just before exercise. (I found this to be true when I tried it. I stopped it when I was getting neck pain, but it allowed me to briefly exercise (pushups) without generating any PEM).

Jason called taking hi-dose vitamin D one of the keys to his recovery, and cited a Harvard-trained neurologist whose research showed a link between a lack of deep sleep and low D3 levels. The neurologist recommended 20,000 IU of vitamin D a day for 6 weeks and then a reduction to 10,000 IU. Jason discusses what he believes are unnecessary fears about vitamin D toxicity but does recommend that everyone have their calcium levels checked if they embark on high-dose vitamin D regimen.

Jason tried the Lightning Process in 2019 when his fatigue was bad and his mood was worse, and it helped. While he still had a long way to go, he regarded it as ‘the very first step” in his recovery. In one of the last chapters, he emphasizes how helpful it is to monitor your internal dialogue and be positive.

Health Rising recently featured a blog on PEM busters, and Jason, not surprisingly, has developed his own unique one for when he had to do something on a low-energy day. He explains the whys of each step in the book.

Jason also has chapters on hyperbaric oxygen therapy (HBOT), CBD, diet (intermittent fasting “is a must and an important part of your recovery”), and positive thinking, and reports briefly on mind/body therapies or tools such as Mickel therapy, Mymee.com, and the Curable app. Other subjects briefly covered include fecal transplants, ozone therapy, halotherapy, biocharger therapy, biomagnetic therapy, chelation therapy, Gerson therapy, laser therapy, and others.

Lastly, Jason provides a list of supplements that he takes and the justifications for each. They include:

Jason’s book was clearly a labor of love that he poured a great deal of energy into. I found it a fascinating read. If you’re into alternative therapies, in particular, it’s well worth a shot.