Disturbances in circulation and provision of oxygen to tissues could underlie many symptoms of ME/CFS. The authors 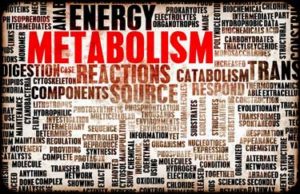 Metabolomics has become a hot research topic in ME/CFS.

Metabolomics has quickly become one of the hottest research trends in chronic fatigue syndrome (ME/CFS).  The metabolomic work in ME/CFS started with the Australians, picked up speed when Ron Davis and Bob Naviaux took it up, and is now being done all over the place. Hanson, Unutmaz and Lipkin make up the short list of new researchers involved.

With Ian Likpin and the Simmaron Research Foundation producing the first metabolomics study of cerebral spinal fluid (CSF), we should soon learn if the metabolomics profiles found thus far – which Hanson’s study reported have demonstrated an unusual consistency in ME/CFS – extend to the CSF and therefore the brain as well.

This study, partially funded by the Solve ME/CFS Initiative (SMCI), demonstrated how hot a topic metabolomics has become. The SMCI did a clever thing when, seeing that ME/CFS samples from prior NIH awards to Dr. Hanson were available, paid Metabolon to analyze them for her.

This study was, with its 832 metabolites surveyed, easily the deepest single look into the metabolomics of ME/CFS ever.   Metabolon, the company doing the analysis, broke down the metabolites found into eight super pathways and 83 (!) sub pathways, making its analysis a very fine-tuned one.

No magic bullet was found – no single metabolite is yet able to explain ME/CFS – but the study did point an arrow in a promising direction.

After an extensive analysis, nine metabolites belonging to four super-pathways (cofactors and vitamins, energy, nucleotides and peptides) were highlighted in the chronic fatigue syndrome group.

With several studies suggesting that the energy production processes in ME/CFS have taken a hit, having a key factor in the Krebs energy cycle – alpha ketoglutarate – pop up was rather stunning. Oddly, though, the levels of alpha ketoglutarate were higher, not lower, than in the controls- something the authors did not attempt to explain. 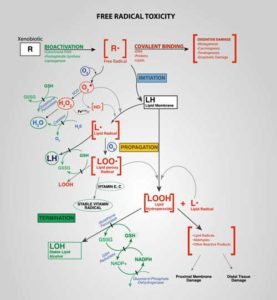 Studies suggest that oxidative stress could impact the brain, the muscles and energy production in ME/CFS. (By Dan Cojocari – Own work, CC BY-SA 4.0, https://commons.wikimedia.org/w/index.php?curid=46529393)

Indeed, energy production problems were not the theme of this study.  Instead, an old “friend”, oxidative stress, was. Virtually every study that has looked for increased oxidative stress (free radicals) in ME/CFS has found it.

Free radicals have been linked, for instance, to reduced energy production in the muscles of people with ME/CFS.  Plus, the membranes of the muscle cells – major targets of free radicals  – appeared to be damaged as well.

Muscle biopsies have turned up evidence of oxidative damage as well.   Plus a muscle gene expression found, guess what, altered expression of the genes involved in mitochondrial functioning, oxidative stress, and muscle structure and fiber type.

The higher levels of heme and three forms of bilirubin in this study suggested a general disturbance of the heme degradation pathway – reflecting perhaps an attempt to cope with high levels of oxidative stress. A disruption in the metabolism of vitamin E- an antioxidant – suggested that the antioxidant system in ME/CFS may not be up to snuff.  All in all, the oxidative stress component appeared to be fairly well established but left a central question unanswered: why was it happening?

A further analysis of the metabolites provided a possible answer. Citing an anoxia metabolite set seen in this study and a past metabolomic study, an asphyxia metabolite in another study, and a similar metabolite profile in infants with hypoxic-ischemic encephalopathy (which is caused by oxygen deprivation), the authors got down to brass tacks and proposed that poor oxygen delivery was the tie that may bind these results together.

That was a nice conclusion given that low oxygen states produce enormous amounts of free radicals (oxidative stress).

The idea that energy and other problems in ME/CFS could derive from an inability to utilize oxygen properly seems to make more sense as time goes on.  Oxygen utilization problems, after all, are certainly behind the early anaerobic thresholds reached during exercise in chronic fatigue syndrome.

In 2014, Vermeulen, a Dutch researcher, asserted just that. His massive ME/CFS exercise study (n=426) indicated that the energy production problems resulted from poor oxygen delivery to the muscles.  Vermeulen was sure enough of that conclusion to plunk it into the title of his study (“Decreased oxygen extraction during cardiopulmonary exercise test in patients with chronic fatigue syndrome.”) 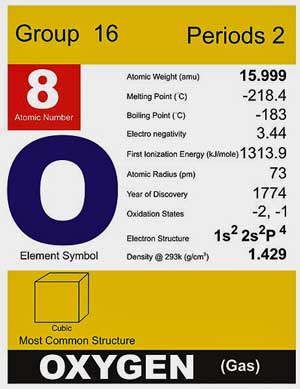 Cells gasping for oxygen – and turning instead to anaerobic energy production to produce energy – could be a core feature of ME/CFS.

Seven years earlier, Dr. David Bell, who, some years into retirement, seems to show up again and again, published a book called “Cellular hypoxia and Neuro-immune fatigue” positing that low oxygen levels at the cellular level were likely behind ME/CFS.

Since then, the evidence has been piling up. Health Rising recently reported on a condition call “stagnant hypoxia” found in POTS which occurs when the blood oxygen content is normal but the blood is flowing too slowly to deliver normal amounts of oxygen to the cells. The hyperventilation found in ME/CFS upon standing or during exercise (as Systrom has reported), could be a compensatory response to stagnant hypoxia.

The consequences of hypoxia in healthy people – fatigue, confusion, headaches and numbness of extremities – aren’t a perfect match for ME/CFS but are close enough to suggest that some form of hypoxia may be present.

For the past five years or so, Shungu’s findings have suggested that a similar scenario is occurring in the brains of ME/CFS and fibromyalgia patients. He believes that high levels of oxidative stress are constricting the blood vessels, impairing blood delivery and creating a hypoxic condition. That hypoxic condition wipes out the aerobic energy production process causing the brain to rely more on anaerobic energy production and produce the high brain lactate levels he has consistently found.

Recently, Ron Davis and SJSU researchers identified red blood cell deformation problems in ME/CFS that could easily impair microcirculation and oxygen delivery. The authors of that study, by the way, concluded that the red blood cell problems were likely caused by oxidative stress. The fact that methemoglobin – a form of hemoglobin that does not carry oxygen – was most closely associated with symptoms in one ME/CFS study suggested that red blood cell problems in ME/CFS could extend past deformability issues.

Several studies have also found reduced blood flow to the muscles in fibromyalgia as well as muscle abnormalities.  An overactive sympathetic nervous system in FM may be producing a low oxygen (hypoxic) state caused by vasoconstriction (narrowing) of the blood vessels.

Many studies have suggested that oxidative stress associated mitochondrial issues exist in fibromyalgia. The latest suggested that the mitochondria in FM were in “hibernation” – perhaps a good place to be if a hypoxic environment is present.

The authors hypothesized that high levels of oxidative stress may be interfering with basic enzymatic processes involving coenzymes such as NAD+/NADH, FAD+/FADH and others.

Pointing to evidence of these problems from their past work, they asserted that, “dehydrogenase, transferase, and oxidase deficiencies are prevalent” and that a, “general imbalance”; i.e. a redox or oxidative stress issue – is affecting basic enzymatic processes in ME/CFS.

A big question with metabolomics, as with all the omics, is whether it will be able to deliver precise enough information for therapeutic intervention. The Hanson study – which pointed to a number of interesting findings, which jive with what we seem to be learning elsewhere about ME/CFS – was a case in point.  The findings seem to make perfect sense, but the authors noted that the study was still too small to provide medical advice.

There’s no answer to the oxygen delivery dilemma – if that’s happening in ME/CFS and FM – yet but some approaches may provide some help. Anti-inflammatory diets and antioxidants have been used in ME/CFS for years to try and tamp down inflammation and the wear and tear of oxidative stress.  Shungu reported at the last IACFS/ME conference that NAC was helpful, and Dr. Klimas will be exploring ways to reduce inflammation and oxidative stress with her new Gulf War Illness grant.

The fact that phenylephrine, by getting more blood (i.e. oxygen) to the brain, virtually stopped orthostatic intolerance in its tracks in a small ME/CFS cohort seems all the more notable given these findings.  Dr. Julian Stewart suggested that some way has to be found to get more blood to the brain.

Mestinon, which affects parasympathetic nervous system functioning, enabled one ME/CFS patient to exercise for the first time in decades.

Blood flow enhancing devices such as the Hummingbird and the Avacen devices described in these pages might be helpful as well.

Hyperbaric oxygen therapy (HBOT) is controversial but one Isreali study got good results in fibromyalgia.

Migraine – A Disease to Keep an Eye on

Migraine, with its blood flow issues and high prevalence in ME/CFS and fibromyalgia (and the recent breakthroughs in treatment), is certainly a disease to keep an eye on.  In fact, a recent study broke new ground when researchers were able to trigger migraines – something they’ve had difficulty doing – by subjecting migraineurs to low oxygen conditions. Doing that caused their blood vessels to dilate – which the phenylephrine study suggests may be happening in ME/CFS – and their brain lactate levels to mount – something which is happening in ME/CFS.

The authors noted that the study’s small size (52 participants) relative to its wide scope (over 800 metabolites) probably made it impossible to distinguish all the important metabolites in ME/CFS.

The authors reported that

“Future work in which a larger and independent cohort is analyzed and compared to other fatiguing illnesses will likely increase the prediction confidence and will reveal whether plasma metabolomics may serve as a reliable tool for objective identification and monitoring of ME/CFS patients.”

Translation = we need bigger studies – with more disease sets – not an uncommon conclusion.

The largest ME/CFS metabolomics study to date highlighted metabolites involved in energy production, oxidative stress and low oxygen conditions. While the study was too small to be determinative it did point an arrow in a familiar direction with its suggestion that low oxygen conditions are creating massive amounts of oxidative stress which are affecting energy production and possibly disrupting fundamental enzymatic processes in the body.