Conferences are exciting because they’re virtually the only place one can go to learn about breaking research.  The NIH ME/CFS conference, with its bevy of new faces that’s taking place on the NIH campus itself on April 4th and 5th, certainly fulfills that need.

Many of the heavy hitters in the field will be presenting (Ron Davis, Nancy Klimas, Maureen Hanson, Ian Lipkin, Peter Rowe, Jarred Younger, Jose Montoya, etc.) but the NIH, thankfully, went beyond the usual suspects to bring in researchers who have never published on the disease but are making some major contributions.

David Systrom, the Boston pulmonologist doing those nasty, expensive and extremely revealing invasive exercise tests is foremost among them.  Systrom’s tale should provide us some hope. Although Systrom has yet to publish specifically on ME/CFS, he’s had his eye on this field for over five years. Hopefully he’s just one of many lying in wait for their opportunity to dive into ME/CFS research.

Systrom first (kind of) showed up with a poster presentation given by one of his graduate students at the 2014 San Francisco IACFS/ME conference.  That poster, which honestly didn’t seem to get much attention, was, with its insights into the exercise physiology of ME/CFS, a head turner.

Systrom, to my knowledge didn’t attend the IACFS/ME Fort Lauderdale conference, and his huge 600 person-plus 2016 exercise intolerance paper hardly mentioned ME/CFS. Despite contributing central insights into the exercise intolerance in this and other diseases, he was still flying under our radar.

That and subsequent papers indicated, however, that the brand of exercise intolerance found in ME/CFS and other diseases is likely due to cardiovascular issues and/or mitochondrial issues associated with autoimmunity or a pathogen. Thanks to funding from an anonymous donor, Systrom is now collaborating with the SMCI and is focused tightly on ME/CFS for the first time.

Systrom now appears to be at the center of a potentially vital hub of research in Boston – that involves Anne Oaklander, Michael Van Elzakker, and autonomic neurologist Peter Novak – which could end up redefining chronic fatigue syndrome  (ME/CFS), fibromyalgia (FM) and other diseases.

That brings us to Anne Oaklander, a leader in the fibromyalgia field who uncovered the small fiber neuropathy in that disease. She’s never published a single paper on ME/CFS either, but given the work she’s doing, she’s a spectacular choice for this conference.

Both Oaklander and Systrom believe the small nerve fiber issues found in the skin of both fibromyalgia and, according to Systrom, ME/CFS patients, are just the tip of iceberg. Those damaged sensory and autonomic nerve fibers, they believe, may occur throughout the bodies of ME/CFS and FM patients.  If they are right, those damaged nerve fibers could conceivably produce just about all the symptoms found in ME/CFS and fibromyalgia.

Oaklander has already published one study examining the effectiveness of IVIG in these patients and hopes to find a less expensive and equally effective way to treat the illness.  (The really good news with these small nerve fibers is that, if they are at the heart of ME/CFS and FM, they can regenerate.)

Michael Van Elzakker is the third leg of the Boston triangle. The author of the 2013 Vagus Nerve Hypothesis for ME/CFS, Van Elzakker hasn’t published any hard data, but recently produced a paper asserting that the kind of brain scans used in ME/CFS aren’t able to peer deeply into the brainstem where he believes the real problem lies.  He’s been slowly digging away doing specialized imaging of the brainstem in ME/CFS and hopefully will be able to report on that.

Mark Davis – the Stanford immunologist working with Ron Davis on the big NIH-funded T-cell grant – is another welcome surprise.  Mark Davis has yet to publish a paper on ME/CFS, but his Open Medicine Foundation funded findings suggesting that the T-cells in ME/CFS have become activated – and his efforts to find out what activated them resulted in Ron Davis receiving a major NIH grant reward. They also jazzed NINDS director Walter Koreshetz who repeatedly referred to them as the kind of exciting work he believes will move this field forward.  Let’s hope that Davis has some early data he can report on.

Another intriguing new face belongs to Oliver Fiehn, the leader of the Fiehn Metabolomics Lab at UC Davis, and the Director of the NIH West Coast Metabolomics Center which operates no less than 16 mass spectrometers.  He’s published over 200 papers on metabolomics. Although he doesn’t appear to be particularly old, he’s already received a Lifetime Achievement Award from the Metabolomics Society.  It’ll be interesting to hear what a central figure in the metabolomics field has to say about ME/CFS.

Bob Naviaux, another metabolomic pioneer, who’s enthralled the ME/CFS community with his studies, is a bit of surprise speaker, given the cold shoulder his work has basically received from the NIH. His recent journal papers, though, are receiving an enormous amount of interest. It’s good to see the NIH give him and his hypothesis some airtime.

Bhupesh Prusty – a Solve ME/CFS Initiative-funded German HHV-6 researcher has been making waves in that field with his startling findings.  Prusty, who won the HHV-6 Foundation’s 2015 Young Investigator of the Year award, believes that HHV-6 targets the mitochondria of cells in ME/CFS, causing drops in energy production. Dr. Dharam Ablashi, the co-discoverer of the HHV-6 virus, has this to say about Prusty: 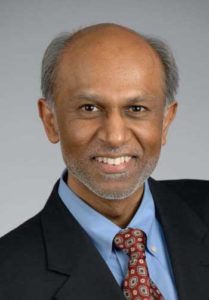 Hopefully, Nath will have some early results from the NIH intramural study.

All the NIH research center directors (Hanson, Unutmaz, Lipkin) will be speaking.  In the October NIH call, Koroshetz noted that the studies were just beginning and not much data was available.  Since this conference was produced in large part to show off the NIH research centers, let’s hope that six months later we’ll get a peak at some early data.

Some other things we might hear from the speakers:

A Clinician Session will also occur.

Avindra Nath Speaks…(But What Will He Say?)

The huge and complex intramural NIH study has been a kind of a mystery with Avindra Nath being unable or unwilling to say much about it on the NIH calls. The NIH is, not surprisingly, pinning a lot on this study and it would be shocking if it didn’t deliver the goods. Hopefully, we’ll get some preliminary results from the thus far cose-mouthed one at the conference.

Kudo’s to the Solve ME/CFS Initiative and the Open Medicine Foundation for supporting this conference. The OMF is providing the lunches and coffee breaks during the meeting and participating in the planning of the Young Investigator’s meeting and the NIH Conference itself.

The meeting will be live streamed or can be attended in person.  The more people that tune in, the better for us. (The NIH measures everything.) Check out the agenda here and register for it here.

Want to personally accelerate research?  We could really use your help. Participate in the joint Solve ME/CFS Initiative / ME Action Lobby Day that occurs the day before the Conference.