Oxaloacetate: the Best Mitochondrial Supplement for ME/CFS (and Long COVID?) 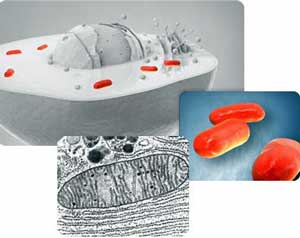 Studies suggest mitochondrial problems are present in ME/CFS and FM. Could supplements help?

Like the last overview on n-acetyl-cysteine (NAC), this supplement – called oxaloacetate (OAA) – does not appear in Lee Know’s book “Mitochondria and the Future of Medicine”. The supplement is unusual in other ways: for one, it’s rare that for an “omics” study to spark an interest in a new treatment or that an experienced ME/CFS doctor has gotten excited about a supplement.

Dr. David Kaufman, MD, clearly watches the ME/CFS research literature closely, and when he saw that Arnaud Germain’s 32-person 2017 metabolomics study found a significant depletion of oxaloacetate, and was the main metabolite found to affect energy issues in ME/CFS, he acted. Kaufman got in touch with a manufacturer and set up his own in-house study.

(Check out Germain’s presentation of a recently completed, larger ME/CFS metabolomic study at the IACFS/ME conference.

When oxaloacetate (OAA) is reduced to malate, it generates NAD+, which plays a role in many cellular processes. It plays a role in gluconeogenesis, amino acid and fatty acid synthesis, and the Krebs/citric acid cycle that produces most of our energy. It’s reportedly able to cross the blood-brain barrier and is sometimes used as a nootropic. Animal trials suggest it may be activating mitochondrial biogenesis pathways and enhancing antioxidant and brain insulin signaling pathways in the brain.

Kaufman’s OAA ME/CFS trial did not have a control group, but Kaufman proposed that the placebo effect in his patients is probably quite low as they’ve generally tried many treatments with little benefit.

After emphasizing that his results were preliminary, and noting that no control groups were used, Kaufman called oxaloacetate’s effects “extraordinary” and highlighted its support of mitochondrial biosynthesis, reduction of inflammation, and enhancement of NAD and NAD+ in the Krebs cycle.

Kaufman tracked the results in 52 patients. The average age was 49, 77% were women, and the average duration of disease was 6.1 years. Patients who’d had the disease as long as 30 years participated in the study.

At 500 mg/ 2x’s a day, the Chalder Fatigue Scale score dropped significantly within 2 weeks and then dropped a bit further. By 6 weeks, it had dropped about 25% on average. The Fatigue Severity and Promis fatigue scores dropped less – by from about 5 to about 15%.

At 1,000 mg/ 2x’s a day, the Fatigue Severity Score didn’t budge much, while the PROMIS Fatigue Score dropped by about 15%. Again, the Chalder Fatigue Scale score dropped further by about 35% (to the low 60’s). Kaufman reported that his patients wanted to stay on the drug and many have been reporting their scores to him 6 months later.

It’s not clear why the scores should differ so much, but Dr. Kaufman believes that the Chalder Fatigue Scale, the only one developed for ME/CFS, is probably the most accurate. If you’re interested, check them out below.

The Chalder Fatigue Scale was developed for ME/CFS and has been around since the early 1990s. Three versions exist. One version asks the participants to rate their answers to the below questions on a 0-3 scale.

The FSS was developed in 1998 to measure fatigue in neurological diseases like multiple sclerosis. The participants use a 7-point scale to report whether they agree or disagree with the following statements: 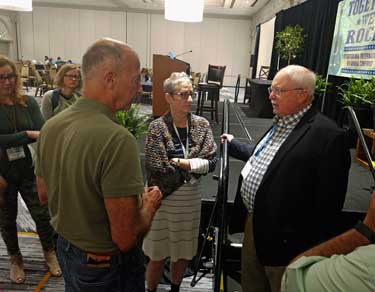 Dr. David Kaufman (on the left) questioning a presenter at the 2018 Dysautonomia Conference

Kaufman – who’s been in this business for quite a while now, and has tried every treatment under the sun – called the results “striking and surprising” and durable as well. More also appears to be better with this supplement: the response appears to increase with the dose.

Calling the numbers “very significant”, Kaufman reported that 80% of patients reported an improvement – not something he usually sees in any intervention for ME/CFS. Some people showed very dramatic reductions in fatigue – by as much as 80%. Increases in well-being are being reported as well, and side effects are rare (a rarity in ME/CFS).

Dose appears to matter. Although the study did not track them, at 1,000 mg 3x’s day, Kaufman stated fatigue improved even more and referred to a 55-year-old man who’d had ME/CFS for 10 years and who received few gains at 500 mg/2x’s a day but whose fatigue plummeted (from 60-20 on the Chalder scale) when he took 1,000 mg/3x’s day.

Kaufman hopes to get funding to do a placebo-controlled trial. He’s also working with a company to do the metabolomics needed to assess oxaloacetate levels before and after supplementation.

When someone asked if supplementation to boost NAD as well would help, Kaufman replied that boosting NAD would be a good thing but is a difficult thing to do.

The worm in the ointment is the cost. You can purchase oxaloacetate online, but it’s very expensive – probably around $5-600 a month at the higher, more effective doses. The oxaloacetate Kaufman (Jubilance) used can be found here. (It’s advertised as a PMS/mood supplement.)

Kaufman, who seems to attend every conference possible, and appears determined to unearth every treatment option possible, also reported on New Frontiers for ME/CFS at the IACFS/ME conference. Kaufman was the doctor who enabled Jeff to break the craniocervical instability (CCI) issue in ME/CFS. Now he’s leading again with the oxaloacetate supplement.

The supplement’s high cost will undoubtedly put it out of reach for many, but one wonders if a successful placebo-controlled trial could change that. Time will hopefully tell how well oxaloacetate works in ME/CFS. If OAA is, as Kaufman believes, uniquely effective in ME/CFS, that in itself should help us learn which parts of the mitochondria (or other systems) are primarily affected in ME/CFS.

OAA studies are being pursued in Alzheimer’s, ALS, myasthenia gravis, cancer, ME/CFS and long COVID. The long-COVID double-armed, randomized, double-blinded placebo-controlled trial is being funded by the same company (Terra Biological) that provided the supplement to Kaufman. It will consist of 40 patients taking 500 mg 2x’s/day. Contact: Alan B Cash (858-947-5722), acash@TerraBiological.com.

Check out two ME/CFS OAA trials in this blog.

Is ME/CFS Having A Moment? An ME/CFS Researcher and an ME/CFS Clinic Go Gangbusters 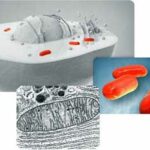