A procedure developed in the 1930s that shoots anesthetics into big nerve bodies found on each side of the neck? Does that sound sketchy or what? It’s reported, though, to be quite safe and it aims to do two potentially important things in long COVID, fibromyalgia, chronic fatigue syndrome, and related diseases: calm down the sympathetic nervous system and restore blood flows. It’s called stellate ganglion block (SGB) and it was just tried in long COVID.

The goal was to block fight/flight signals to the brain – allowing the system to reset itself.

Various drugs and mindfulness/meditation techniques have been used in an attempt to calm the fight or flight response down in these diseases. One intriguing technique, though, called stellate ganglion block (SGB) has almost never popped up in the ME/CFS, FM, or POTS medical literature. Demonstrating again, long COVID’s ability to shake things up and get investigators peering into all sorts of corners, it just showed up in a case series report for long COVID.

This old technique – developed in the 1930s – essentially jams a central waypoint for sympathetic nervous system activity called the stellate ganglion. These nerve bodies transport fight or flight messages to the upper spinal cord and brain. The technique consists of injecting an anesthetic near this big nerve body to temporarily block the fight or flight messages and hopefully reset the system.

One side of the neck is usually done in one day and the other side the other day. The procedure usually takes about 30 minutes after which the patient can return home. Different patients require different protocols. From 2 to 10 injections can be done, and the risks are described as “very low”.

This recent paper, “Stellate ganglion block reduces symptoms of Long COVID: A case series” – from two doctors associated with the Neuroversion clinic in Anchorage, Alaska – described two people with long COVID who received positive long-term results from this procedure. The clinic – whose motto is “Break the cycle of pain” – states its goal is “resetting the nerves rather than hiding the symptoms with opioids”.  It appears to specialize in injections and infusions of all kinds. 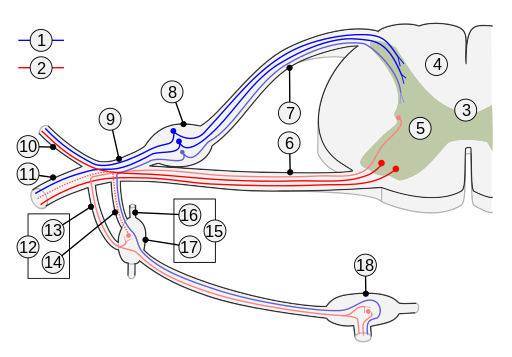 Eight months after a relatively mild COVID-19 infection, a 42-year-old female experienced smell and taste problems, severe fatigue, cognitive problems, sleep difficulty, elevated heart rate, and other symptoms. She lost her full-time job and was struggling to keep up with a part-time job.

Her symptoms improved immediately after the block: smell and taste were restored, she was quickly able to drive again, her cognition dramatically improved, and she resumed longer working hours. Two months later her improvements remained.

Like patient number one, patient number two experienced a relatively mild case of COVID-19. Like patient one, though, she experienced severe cognitive difficulties and underwent “intense, occupational, physical, and speech” therapy for her “profound memory deficits”, her speech impediments, her inability to concentrate, coordination problems, and extreme fatigue. She also experienced significant body pain, headaches, and reported that mental or physical exertion would cause her symptoms to flare up.

Showing up at the Neurovision clinic about seven months after coming down with COVID-19, the second patient received the same set of injections on the right and left sides of her neck. Like the first patient, her taste and smell issues quickly disappeared. One week after the treatment she began teaching again. Two months later she reported she was back to normal – her fatigue and cognitive problems and PEM had all disappeared.

A recent review of stellate ganglion block studies focused on reducing sympathetic nervous system-driven pain disorders (which may include fibromyalgia) reported that the pain reduction achieved was “highly significant” and that the procedure was “safe and effective”.

Increased sympathetic nervous system activity is believed to reduce blood flows by clamping down on the blood vessels. SGB’s ability to increase blood flows is well documented. Given all the interest in the microcirculation in ME/CFS, FM, and long COVID, it was eye-opening to see a 1988 fibromyalgia stellate ganglion block study “Regional sympathetic blockade in primary fibromyalgia” that attributed its positive results to improvements in the microcirculation. This study concluded, rather presciently, that increased sympathetic nervous system activity may contribute to fibromyalgia.

While SGB has not been studied in ME/CFS was featured prominently in a part of the discussion section focused on brain blood flows. Noting the Van Campen/Visser/Rowe ME/CFS findings of reduced blood flows to the brain, the authors reported that SGB has been shown to increase brain blood flows as well.

Just what exactly, happening, though, is unclear as the effects of SGB tend to last much longer than would be expected from the short-term use of this drug. The authors list three possibilities:

Another long-COVID study has opened – or in the case of fibromyalgia reopened – a treatment possibility for diseases like ME/CFS, fibromyalgia, and one might guess POTS. The combination of a procedure that reduces sympathetic nervous activity (which we know is high), and has been shown to improve the circulation (apparently impaired to both the muscles and brain), is intriguing.

Whether doctors will want to try this approach is unclear, but the fact that a fibromyalgia study was done may help. Clinical studies report that the procedure is safe and takes about 30 minutes.

Until large, randomized, placebo-controlled trials are done, though, there’s no way to tell how representative these two successful case reports are. Doctors typically write case reports to get their findings into the medical literature and provide a basis for clinical trials. With an old but successful fibromyalgia clinical trial, and now these two cases reports, this procedure will hopefully get more study.

Thanks to the almost 450 people who’ve supported Health Rising during its year-end fundraising drive!

Happy Holidays to everyone and thanks for your help!

I don’t know if you’ve ever heard of stellate ganglion blocks. I hardly had. Health Rising, though, keeps a close eye on the research literature, and when this report popped up, we checked it out only to find that this procedure may present a possible treatment option for these diseases.

If scouring the research literature for possible treatments unblocks your blood vessels, please support us!