All Together Now? Did Lipkin’s Latest ME/CFS Study Put the Pieces Together?

The really neat thing about Ian Lipkin’s latest work on ME/CFS is how well all the results fit together. Health Rising reported on the preprint of this paper earlier, but the final version that recently came out has fleshed out some things.

This big NIH-funded Ian Lipkin study had several things going for it. It was larger, and assessed more metabolites than any other study; it used patients diagnosed by ME/CFS experts, and employed, in its words, “complete and cautious statistical approaches”; i.e. it’s a rigorous and trustworthy metabolomic study.

In short, it’s a major paper – and boy, were its findings interesting – not just because they fingered a potential new player – peroxisomes – but because of how well they all fit together – and that’s what this blog will focus on.

Metabolism is a big deal. In some ways, it’s the big deal. It’s concerned with nothing less than the “chemical processes that occur within a living organism in order to maintain life”. Breaking down foods to provide energy, proteins, or fats, etc. is metabolism. So is protein, carbohydrate, and fat synthesis. Any chemical reaction that transforms one compound into something else comes under the rubric of metabolism. 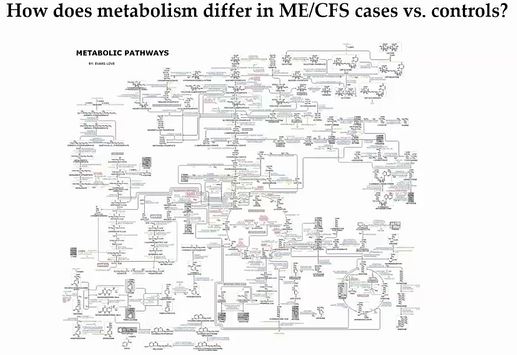 It’s metabolism that produces the sometimes huge, head-spinning diagrams of metabolic pathways. If some part of a pathway gets blocked – the upstream portions of the pathway build up – and the downstream parts of the pathway decline. Or, if a particular pathway is getting hit hard by something (infection, toxin, etc.) that will show up. It’s these kinds of abnormalities metabolomic studies are looking for.

Small organelles show up in a big way. The peroxisome is the little purple circle at the bottom of the cell.

Fatty Acid Breakdown – Reductions in plasmalogens that protect the phospholipids which, in turn, support the all-important cellular membranes (the “skin” surrounding the cell) pointed an arrow at the peroxisomes – small organelles in the cells which manufacture them.

That’s precisely what this study suggests may be happening in ME/CFS. The authors believe the peroxisome-fatty acid-mitochondria connection has been cut.

“We posit that this crosstalk between mitochondria and peroxisomes plays an important role in maintaining energy homeostasis and that dysregulation contributes to the fatigue and cognitive dysfunction that are hallmarks of ME/CFS.”

Several findings suggested the membranes surrounding the mitochondrial and other cells were suffering.

Low levels of carnitines may turn out to be a big deal as they can also flip a switch that tells the peroxisomes to start producing carnitine – thus presumably inhibiting their ability to break down long chain fatty acids.

Because peroxisomes also regulate the mopping up of free radicals (reactive oxygen species (ROS)), the impaired peroxisome functioning could also contribute to a hot mess of inflammation.

That brings us back to the cellular membranes that protect the cell – a prime target of free radicals. Thus far, we’ve two potential hits to them (low plasmologen and carnitine levels), and now comes a third: low levels of an important membranal component – phosphatidylcholine (PC).

Look how quickly a potential suite of hits to the mitochondria have shown up:

More was coming, though.

The authors reported that the low levels of lysophosphatidylcholines, phospholipid ethers, and prostaglandins (D2, F2α) have been associated with mitochondrial damage and/or increased oxidative stress which, given the poor state the mitochondrial membranes appear to be in, is not a happy situation.

About those membranes… the low levels of  PCs, ceramides, sphingomyelins, and phospholipid ethers provide further evidence of membrane damage, as they all play important roles found in the membranes as well. Cells get their marching orders through receptors found in their membranes. Because ceramides play an important role in the propagation of signals through the membranes, the low ceramide levels found could render a cell dead in the water unable to respond to the signals it’s getting.

Because choline also enhances the functioning of the G-protein coupled receptors that regulate autonomic nervous system (ANS) functioning and play a role in the production of epinephrine, as well, the authors proposed that the lower choline levels might be impacting ANS functioning, resulting in problems with blood flows and oxygen supply to the tissues.

It was the coherence of its findings that made this study so intriguing – every major finding seemed to fit together in some way. What we really want out of a study is the ability to tell a biological tale, and this one certainly did regarding the mitochondria.

Of course, we must remember that correlation is not causation, and that the body is very complex and can and does frequently fool us. The authors said so in so many words. While noting the strengths of the study (rigorously defined patients, a “complete and cautious statistical approach”, etc.), the authors stated that it was “imperative that the validity of novel findings reported here be independently tested in other cohorts”, and that larger studies with more ME/CFS patients be done.

Still, the emergence of such a coherent pattern of dysfunction is nothing if not encouraging, particularly since one of the central findings – problems with long chain fatty acid metabolism – was also found by the Fisher research group in Australia, and has popped up in fibromyalgia as well.

The funding for the NIH-funded ME/CFS research centers has been renewed – at the same pitiful levels they began with – and which caused some researchers to shy away.

I don’t know how much longer the NIH can keep up the farce of spending a billion-plus dollars on long COVID while ignoring ME/CFS, but let’s hope that studies like this one from Lipkin and those from Maureen Hanson’s NIH-funded centers will change its mind, and Lipkin will be able to get the funding to do a larger study containing both ME/CFS and long-COVID patients, one which is able to get definitive results.

The NIH Kicks Chronic Fatigue Syndrome (ME/CFS) in the Teeth – Again. It May Regret It

The long-COVID studies that have been done suggest the mitochondria have been impacted, and a recent hypothesis paper proposed that “NAD+ metabolome disruption” plays a central role in the condition, suggesting that intravenous NAD+ trials begin.