Is the Brain Causing the Small Fiber Neuropathy in Fibromyalgia (and ME/CFS?)

It seemed ever so clear. The reduction in the number of small nerves in the skin and eyes of roughly forty percent or so of the people with fibromyalgia (FM) and chronic fatigue syndrome (ME/CFS) must bring the body – as opposed to the brain – into play. How could nerve damage in the body, after all, be explained by central sensitization in the brain?  Something separate must be going on in the body.

The only problem with that notion is that, thus far, researchers have been unable to track down that something. Given the small nerve “burnout” found, the immune system was immediately fingered, but immune studies, including a recent study that looked for an autoimmune cause, have been unrewarding.

Plus, the oddness of the small fiber neuropathy (SFN) occurring in FM had to be taken into account.  The SFN in FM appears to result in smaller nerves as well as reduced nerve density – an unusual combination.  Functionally, the nerve problems appear to be different as well. One study suggests that the nerve conduction velocity in FM slows as nerve activity increases. (That is reminiscent of a similar pattern in ME/CFS of pooping out under the stress of an increased workload.)

Plus, the SFN symptoms in FM are a bit different. The traditional stocking presentation seen in diabetes, where the symptoms first start in the feet and moves upwards, often doesn’t occur in FM.  Nor is the symptom presentation quite as expected. One study suggested that the SFN in FM is not increasing pain levels but is associated with pins and needles (paresthesias) sensations, and interestingly, autonomic nervous system symptoms.

To our knowledge, this is the first demonstration of an entirely “top-down” pathogenic mechanism by which increased CNS excitatory tone not only increased pain behavior but also altered the density and length of peripheral nerve fibers. Harte et al. 2017

Perhaps we are ready for a different interpretation of the SFN in FM. That new interpretation first showed up in a 2017 study by Stephen Harte and Christopher Watson. Harte and Watson noted that brain imaging scans indicated that increased activity exists in the connections between the two brain regions (insula and anterior cingulate cortex (ACC)) involved in producing pain sensations. (Both of these regions have been implicated in ME/CFS as well.)

A part of the limbic system – the insula – regulates basic processes such as pain levels, the autonomic nervous system, and the emotions. Problems with the insula have been implicated in both ME/CFS and FM.

Harte and Watson’s novel idea proposed a very strong brain/body connection existed indeed. They proposed that hyperactivity in the insula is producing such strong pain sensations that the body was effectively burning out the nerves in the periphery in an attempt to stop them.

Increasing the glutamate levels in the insulas of rats resulted in increased sensitivity to heat and pressure and – a reduction in the nerve fiber density in the rodents’ hind paws. The authors presented two possibilities: the peripheral nervous system “reorganization” to stop the flow of sensory stimuli to an already overheated brain; and the possibility that the alterations in the insula – a major autonomic nervous system regulator – could be impacting the small autonomic nervous system fibers found in conjunction with the sensory nerve fibers in the skin.

Six years ago Marco proposed that glutamate could be causing the problems in ME/CFS/FM – including small fiber neuropathy.

The study also offered some hope for FM patients. Despite increasing the insula’s glutamate levels high enough to produce dramatically increased pain and reduce nerve density in the rodents’ feet, no nerve damage was found in the insula. It had been thought that glutamate-induced excitotoxity could be damaging neurons in FM – a more difficult situation. This study, though, found that both the insula and the anterior cingulate cruciate were fully intact; they were simply being supercharged. Neuron repair, then, in FM might not be needed.

The Chicken or the Egg? The Brain and Pain Sensitization in the Skin

A recent Brazilian study, “Potency of descending pain modulatory system is linked with peripheral sensory dysfunction in fibromyalgia: An exploratory study“, expands on the brain-body / body-brain connection in FM. The study, which used humans this time, determined whether a factor associated with reduced pain inhibition in the brain called BDNF was associated with problems with skin sensitization as measured by NPS (numerical pain scale) and QST (quantitative sensory testing) testing. This testing was used as an analogue for small nerve fiber problems.

If increased sensitization in the skin was purely a peripheral (or body) phenomenon, it should not be related to problems in the brain. If, on the other hand, increased pain levels at the skin were associated with weaker brain inhibitory pain pathways – the two are likely related.

Reduced small nerve fiber densities in the skin or the eyes has been found in about 45% of people with fibromyalgia patients.

An experiement to increase glutamate levels in the insula of rats suggested that idea may be wrong.   Increased activity in that key pain producing area of the brain resulted in reduced nerve fiber levels in the rats feet.

The authors proposed that body may be reducing nerve fiber levels in an attempt to reduce the levels of stimuli reaching an already over-heated area of the brain.

Another study indirectly associated problems with nerve fibers in the skin with reductions in the pain producing pathways in the brain.

Another possibility is that autonomic nervous system issues are driving the small nerve fiber problems in FM.

Lastly, a just published study suggests that the small nerve issues are associated with increased pain levels and disease burden in FM.

The study measured a factor called BDNF (brain-derived-neurotrophic-factor) which has been found increased in FM. BDNF strengthens the excitatory and pain-triggering nerve pathways in the brain and weakens the inhibitory and pain reducing pathways. In fact, one study suggests this bad boy may even be able to turn pain inhibiting pathways into pain producing pathways (!).

This study confirmed our hypothesis that the peripheral sensory dysfunction is associated with the disengagement of the descending pain modularity system (DPMS) in FM. The authors

The evidence is pretty preliminary, but it suggests that nerve problems in the skin and altered pain pathways in the brain may be linked in FM. If this is true, four possibilities have been raised: strange signal transmissions from the small nerve fibers in the skin are causing the pain inhibitory pathways in the brain to go bananas (turn themselves off). Or, as Harte suggested, a weakened pain inhibiting system is causing the body to wreak havoc on the small nerve fibers in an attempt to protect itself.  A third possibility is that both are happening. 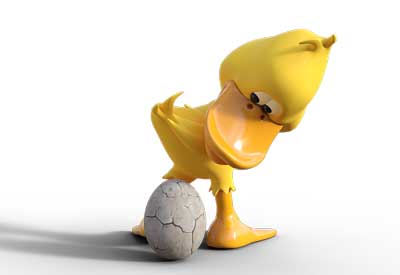 Which comes first? The small fiber neuropathy or the brain dysfunction? Or do they both arise together? (Image-by-Noupload-from-Pixabay)

It’s also possible that something as yet unidentified in the skin is damaging the small nerve fibers there. Plenty of evidence – from increased levels of oxidative stress, mitochondrial problems, inflammation, pain mediators to sympathetic nervous system alterations – suggests problems exist in the skin of FM patients.

A just published study put an extra pin in the possible importance of SFN in FM and possibly ME/CFS. This large study suggests that reduced small nerve fiber density is strongly associated with increased pain levels and disease burden in FM. That casts doubt on Harte’s and Clauw’s claim that SFN is a kind of secondary factor in FM and suggests that finding out its cause may be more critical than ever.