We recommend that all ME/CFS and Fibromyalgia patients have a NASA 10-minute Lean Test to assess for orthostatic intolerance. Batetman Horne Center

The saga of the effort to introduce and validate the NASA Lean Test (NLT) for ME/CFS just seems so right in so many ways. First the Bateman Horne Center identified a test – from NASA no less –  that can easily be used to identify orthostatic intolerance (symptoms when standing).

Then they enrolled a large number of patients, got researchers involved, validated the test, and in doing so, learned something new about ME/CFS in the process. It’s taken years to get through all this – but in the end, it provides something that’s really needed – an easy test to identify orthostatic intolerance (OI) and get doctors engaged in treating ME/CFS as a biological phenomena they can help with. 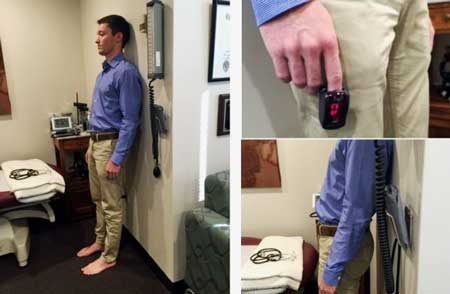 Orthostatic intolerance refers to the inability to stand without symptoms. Although most of us are completely unaware of it, successful standing up requires an array of processes to work properly.

The blood pressure at your arm momentarily drops as your blood starts to flow downwards, but then should bound back up as baroreceptors in the blood vessels tell your heart to beat faster. All this occurs automatically and below the level of consciousness.

Tilt tables have traditionally been used to assess OI but many medical practices don’t have access to them. The NASA Lean Test, on the other hand, can be done using the tools found in a doctor’s office. It requires only three things: an exam table, a pulse oximeter (placed on one hand), and a blood pressure cuff (placed on the opposite arm).

First, the person rests lying down for 10 minutes, then she/he stands up, and with her/his heels 6-8 inches from the wall, and shoulder blades touching it, stays there for ten minutes (or until it’s clear they have OI). Heart rate, blood pressure and symptoms are recorded. Just as the tilt table test does, the NLT removes the skeletal muscle pump action from the equation. You, your baroreceptors, your heart, and your autonomic nervous system are on your own. 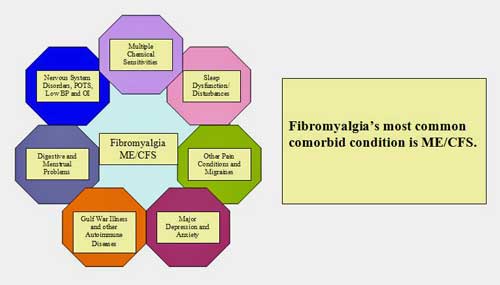 Many people don’t associated FM with orthostatic intolerance, but it is one of its comorbid conditions. Although the study was on ME/CFS, Dr. Bateman clearly states the NASA Lean Test should be used in both ME/CFS and FM. (Image from Wikimedia – https://commons.wikimedia.org/wiki/File:Fibromyalgia_and_comorbid_conditions.jpg)

Besides heart rate and blood pressure, something called pulse pressure was measured as well. Pulse pressure is the difference between systolic and diastolic blood pressure. It represents the stroke volume – the volume of blood ejected by the heart when it beats.

Postural orthostatic tachycardia syndrome (POTS) was defined as a heart rate increase of >30 beats per minute (bpm) upon standing or a heart rate of greater than 120 bpm.

Duration Matters – Less is not More

Time matters – this study validated the results of another tilt table study which indicated that the 1-3 minute orthostatic assessment typically carried out in doctors’ offices isn’t enough. Even a 2-5 minute tilt table test will miss a considerable set of POTS patients.

The Lee-Bateman study found that at least 5 minutes of the NASA lean test are necessary to pick up signs of orthostatic intolerance in most of the participants and a full ten minutes are needed to pick up more.

Interlude – the Plash study – More Can Be Tricky

In 2013, Plash also found that test duration matters. Everyone’s physiology, whether healthy or not, starts to suffer after being tilted or being forced to stand for awhile.

The Lee/Bateman study found the same. At the end of ten minutes, 33% of healthy controls meet the criteria for POTS (increase of <30 bpm). (Forty percent of the people with ME/CFS did.)

The issue arises because even the heart rates of healthy people tend to increase over time when they are tilted. Plash suggested that at the 10 minute mark, the criteria for having POTS should be increased from 30 bpm to 37 bpm, and at the 30 minute mark, to 47 bpm.

Note that even using this stiffened criteria, the tests were not completely accurate; i.e. they still falsely identified from 20-27% of healthy controls as having POTS. This isn’t much of an issue for people with ME/CFS/FM with orthostatic intolerance issues (symptoms increase upon standing or after standing for awhile, but it’s interesting that some healthy people – and probably not a few – have POTS-like increased heart rates upon standing. For some reason, they don’t suffer from POTS.

The issue also makes clear that increased heart rates by themselves don’t necessarily produce POTS. It’s a multidimensional illness – some aspects of which we clearly don’t know much about.

Plash concluded that POTS should only be identified in people with symptoms of orthostatic intolerance and high heart rates on a TILT or standing test like the NASA Lean Test (NLT). The Bateman Horne Center concludes the same – high heart rates during the NLT are only diagnostic for POTS if they are accompanied by symptoms as well.

Symptoms, however, were not hard to find in the chronic fatigue syndrome (ME/CFS) group. The test provoked far more symptoms in the people with ME/CFS patients – even in those without POTS (see below) – than it did in the healthy controls.

The ME/CFS group also has worse cardiovascular scores. While both groups’ heart rates increased over time, the heart rates of the ME/CFS group started out higher (that high baseline heart rate issue) and went up faster. In fact, every measured test result (blood pressure/ heart rate/ pulse pressure) was worse in the ME/CFS patients than the healthy control group.

Higher heart rates (both resting and standing) and “pathologic” drops in pulse pressure particularly distinguished the ME/CFS patients from the healthy controls.

The “striking finding” of the very abnormally narrowed pulse pressure in shorter duration ME/CFS patients (<4 years) appears to have reflected a reduced stroke volume; i.e. reduced blood outflows from the heart. That is usually the result of a heart problem, but studies suggest the heart in ME/CFS is generally fine. Instead, the authors asserted that narrowed pulse pressure was almost certainly caused by reduced blood inflows to the heart.

That ties in nicely with what Systrom found (reduced preload) in his invasive exercise study. Systrom believes several things may be in play, including microcirculatory problems which are reducing blood flows to the venous system (the left to right shunt) causing less blood to be available to the heart.

The Exercise Intolerance in POTS, ME/CFS and Fibromyalgia Explained?

Newbies Are the Worst Off

Interestingly, the more recently a person came down with ME/CFS, the worse off they were. The relative newbies – those who have been ill for less than 4 years – had the worst drops in pulse pressure, followed by those who had had ME/CFS for over ten years.

Why would people newer to ME/CFS have worse problems than those who had it longer? Perhaps because some sort of compensatory approach over time been developed. The autonomic nervous system can be trained and it can apparently adapt to some extent. My symptoms were certainly worse in the beginning.

That study also found that even ME/CFS patients who didn’t meet the criteria for either POTS or orthostatic hypotension still experienced significantly more symptoms during the NLT than did the healthy controls. Somehow, they too were getting whacked by having to lean up against a wall for ten minutes. That finding reminds us that the field of orthostatic intolerance is relatively new, surprises are in store, and that POTS or OH isn’t everything.

The field is also growing and the authors were able to point quickly to a 2020 study by Van Campen and Visser, which found that even ME/CFS patients without POTS or orthostatic hypotension still experienced reduced blood flows to the brain during a tilt test.

I may have experienced something like this during a twin study about 15 years ago. Both my twin and I “passed” the tilt table test, but I was miserable throughout and remained symptomatic for some time afterwards. He, on the other hand, experienced no symptoms at all.

The Visser study followed a 2018 study by Peter Novak, who also uncovered a group of patients without POTS or any other sign of OI, but nevertheless had reduced blood flows to the brain. Novak uncovered this group after he kept getting “POTS” patients who didn’t end up having POTS. What they did have were low CO2 levels. Novak called this new form of orthostatic intolerance hypocapnic cerebral hypoperfusion.

Novak suggested a number of possible causes (baroreceptor problems, metabolic acidosis, orthostatic ventilation-perfusion mismatch, problems with the respiratory centers in the brain) and was planning to dig deeper. Since this is probably not a small group, and since it’s clear that it’s abundant in ME/CFS, further investigations into this group are going to be fascinating.

If you’ve been disappointed when your non-POTS diagnosis failed to capture your brain fog, standing problems, etc. – be disappointed no more. There are clearly other ways to mess up your brain when you stand than by having a fast heart rate or a balky blood pressure adjustment system.

While the study didn’t provide treatment recommendations, many treatment options exist. That’s good news for you and your doctor. On the one hand, seeing your doctor may actually help you to get better (woo-woo). On the other, your doctors get to do what they got into their profession to do – help you. Maybe they’ll even get more interested in ME/CFS or FM.

From doing things like increasing salt intake to increasing blood volume, to wearing compression stockings, to drugs, to recumbent exercises (for those who can handle them), many options are available for people with OI.

Check out some videos from the Bateman Horne Center on how to diagnose and treat orthostatic intolerance:

The main finding was that many cases of orthostatic intolerance can now be diagnosed in a doctor’s office using the simple tools embedded in the NASA Lean Test. All a doctor needs to do is assess symptoms, heart rate and blood pressure for ten minutes. Orthostatic intolerance is diagnosed when the following guidelines are met – in the presence of symptoms:

Health Rising has a ‘how to’ for the NASA Lean Test from Dr. Lucinda Bateman here. Note that the test is most revealing if the patient:

The study also revealed that tests for OI must be at least five minutes long, that orthostatic intolerance can only be diagnosed in people with symptoms of it, that some healthy people have high POTS-like heart rates, that the orthostatic intolerance in people who are relatively new to ME/CFS (<4 yrs) is worse, and it suggested that Systrom’s findings of reduced preload or blood flows to the heart are accurate. That suggests problems with the microcirculation are losing blood somewhere along the the way.